There’s something about Golden Retriever puppies that’s particularly appealing.  At the back of her mind, Gill always had a hope that one day, Zara would give birth to a litter of magnificent puppies. Zara’s such a lovely dog, and Gill had many friends who’d love a dog like her. Gill decided that she’d only do this if she did it in the best possible way. She even had xray pictures taken of Zara’s hips, getting them scored to confirm that yes, she was perfect for breeding.

The original idea was for Zara to have pups when she was four or five years of age, but like many of life’s plans, it didn’t quite work out like that. Gill had a child, life became exceptionally busy, and meantime, Zara was gradually getting older. She came into season regularly, every nine months, for her entire life, but somehow, the time was never quite right to breed from her.

Zara had always had exceptionally regular seasons: she’d pass a few drops of blood for ten days, then that would be it. Last month, for the first time ever, something different happened. After ten days, she didn’t stop bleeding. She was still in good health, and a happy dog, but when she was still passing drops of blood after two full weeks, Gill knew that there was something wrong, so she brought her to see me.

After examining Zara, I knew that she had a problem with her reproductive tract that was not going to respond to medical treatment. The only answer was to carry out a full ovario-hysterectomy, surgically removing her uterus and ovaries. It was a major operation for an eleven year old dog, but I was confident that it would permanently cure her.

During the operation, the precise reasons behind Zara’s problem became clear: she had multiple cysts on both ovaries, as well as early signs of disease in her uterus. These cysts – similar to benign tumours of the ovaries – would have been producing excessive quantities of oestrogen hormones which were causing the prolonged bleeding. There would also have been many other, less obvious signs of disease that would have developed in time.

The operation cured Zara: the bleeding dried up immediately, and she recovered rapidly from the surgery. And Gill noticed something else: she became more playful and energetic. Gill had thought that Zara was slowing up due to old age, but she now realised that the ovarian cysts had been having an impact on Zara’s personality. She’s started to behave like a young dog again.
Apart from one thing: Zara is definitely not having puppies now! 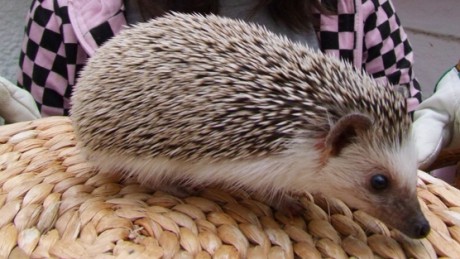 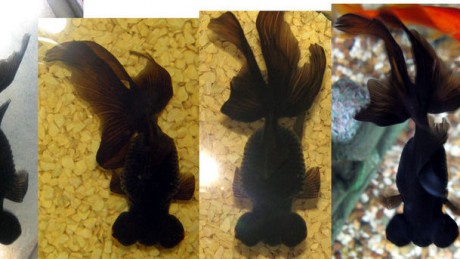 Wishy-Fishy, a Black Moor goldfish who had developed a swollen, bloated abdomen. 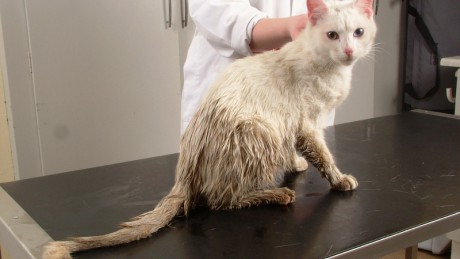