Bernie is a young Lurcher who is a rescued stray

Bernie appeal copy: “If Bernie could talk, he would no doubt tell a heart-wrenching tale of how he came to be the frightened stray who was terrified of the people who were trying to help him.

During his first few weeks at NAWT Bernie cowered in his kennel and flinched if anyone tried to touch him. His deep mistrust of people was upsetting to see and you couldn’t help wonder what on earth had happened to this poor soul.

Bernie’s outlook turned around in just a few short months in NAWT care. He reacted positively the their Open Paw programme, which is particularly effective for dogs like Bernie. He has learnt that there are people with infinite patience, who respect his space, who always bring delicious treats and never harm him or make him scared.

Even passers-by drop treats into his kennel so he no longer needs to bark at them to keep them away.

Life for Bernie is now worth living and even enjoying. Open Paw has opened his eyes to a world where humans play games of fetch, give you a scratch behind the ears and are warm and safe to cuddle up to on the sofa.

No-one could have imagined the difference in the once skinny, trembling creature and Bernie is now waiting and hoping for those special owners who will have the pleasure of enjoying his unique ‘happy dance’ when you scratch his back end.

Bernie would like a home in the Hertfordshire area, with someone who is home for most of the day. He needs to be the only pet, but he would make a loving and loyal companion.”

Bernie is still with us at the centre. He has come a long way in the last few months, the Open Paw training is really helping him to trust the staff and to be more relaxed when people approach his kennel to say hi, and drop in a few treats. He is slowly gaining more confidence with the help of the Open Paw training 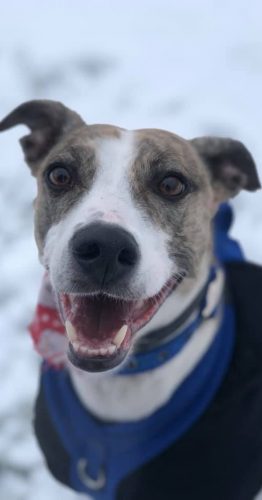