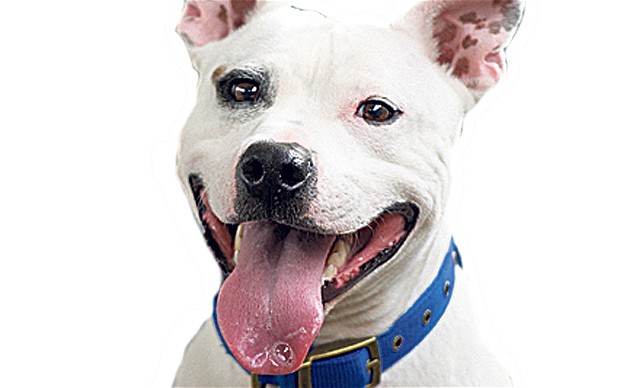 Staff and volunteers at Battersea Dogs & Cats Home are appealing to London’s dog lovers to consider giving a home to one of its longest term residents who has been in kennels for the equivalent of 10 dog years.

Hayden, a three year old Staffordshire Bull Terrier cross, was found wandering the streets of the capital and was brought to the safety of the world famous animal charity where he has been waiting for a home for 361 days.

The average stay for dogs at Battersea is 48 days but some, like Hayden, stay much longer. Jenny Dugdale, Team Leader at Battersea says: “We can’t understand why Hayden’s been here for so long, but there’s no time limit on how long dogs stay with us. He’s such a handsome boy and is really eye catching with his unusual markings. Hopefully someone will fall for him soon as he really does deserve to find a loving new family.”

Hayden is a fun and lively boy who likes to keep himself busy. He is looking for active owners who share his lust for life. Hayden would do well with people who enjoy long walks and he would make a good running companion. Although sociable with dogs when out and about, Hayden would rather be the only dog in the house but he may be able to live with a cat.
To find out more about adopting Hayden contact Battersea Dogs & Cats Home on 020 7627 9234 or email rehoming@battersea.org.uk. Visit www.battersea.org.uk.

Hayden has been renamed Vinnie by his new owners arrived at the world famous animal charity as a stray in October 2010. He was at the Home for 453 days before being spotted by Janine Calo and her 10 year old son from Southampton. Janine said: “Staffies are the best breed in the world and after our previous Staffie passed away, we felt ready to offer another one a new start.

Vinnie is fantastic with my son, has impeccable manners and is one of the most affectionate and loving dogs I’ve ever known. Taking Vinnie into our lives has been so rewarding. He’s been on some lovely walks in nearby woods, he’s been down to the sea, and he even licked a horse on the nose! It’s just fantastic giving him all these new experiences he’s probably never had. Battersea were brilliant at helping us choose Vinnie, and I would recommend them to anyone thinking of getting a dog or cat”.

Although the average stay for dogs at Battersea is 48 days, some, like Vinnie stay much longer. There is no time limit on how long dogs and cats stay at the charity before finding a new home. Last year Battersea took in almost 9000 lost and unwanted dogs and cats across its three sites.

Kerrie Strong is one of Battersea’s Rehoming and Welfare Assistants who helped Vinnie find his new home. She added: “Vinnie was such a popular dog with all the staff and volunteers here at Battersea and we are baffled as to why it took so long for him to find a home as he’s such a lovely, friendly boy. We are all so pleased he’s finally gone home. His new family are the perfect match and love him dearly – we’re sure he’ll be very happy in his new home”.