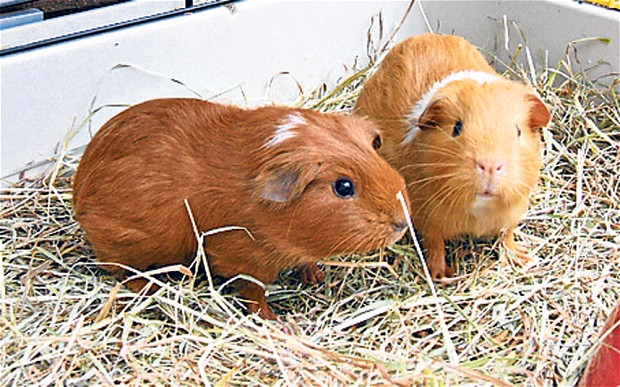 Cocoa and Sandy featured in June 2012

Hackenthorpe Guinea Pig Sanctuary has plenty of mature Guinea Pigs (both sexes, various types and ages) seeking homes, plus (immediately) two piglets that arrived last week for rescue and rehoming. The previous owner acquired two female guinea pigs in April, only to find they were both pregnant. The first had a stillborn litter. The second had two live male piglets which are now looking for homes.

Cocoa and Sandy were born (to mum Luna) on 22nd May and were brought to Hackenthorpe for homing in mid-June. The aim is to rehome them together later in the summer when they are a bit more mature (eight weeks onwards).

To find out more, contact Hackenthorpe Guinea Pig Sanctuary in Sheffield, at 0114 248 0481, or visit peteandpets.com

I’m delighted to say that both piglets were successfully homed following their appearance in the Telegraph, with two different local families, as companions to other compatible male guinea pigs.