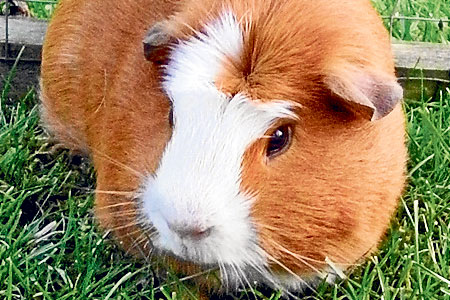 This week’s rescue pet is Ed, a seven-month-old guinea pig. Contact Blue Cross in Burford, Oxon on 0300 777 1570 or email burford@bluecross.org.uk

When Ed came to us he was very shy, he didn’t like being handled and had never lived outside.

Our 10 year old son Ben (who is also quite shy and doesn’t like being manhandled!) spent a lot of time stroking and gently grooming him and they developed a real bond.  These days Ed lives in a large run in the garden with his best friend Hayley (another guinea pig adopted from the Blue Cross).  As a baby, Hayley had been bullied by her Mum who often stopped her having any food but Ed loves Hayley to bits and would happily share his last carrot with her.

They love chasing each other around their run, munching from the same bowl or curling up together in their shelter.  Ed loves to eat anything crunchy and his favourite occasional treat is raw corn on the cob – husk, silks and all.