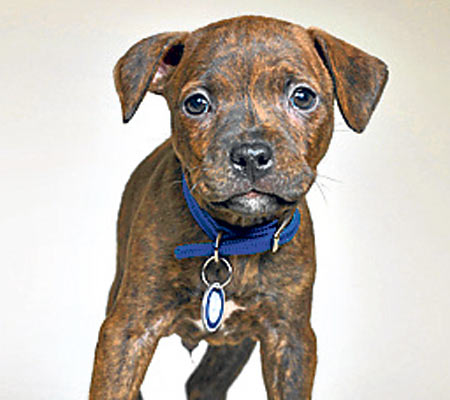 Emerald featured in May 2013

A family from Sittingbourne, Kent have given a loving new home to Battersea Dogs & Cats Home’s 1000th dog of 2013. The nine week old Staffordshire Bull Terrier pup named Emerald arrived at the world famous animal charity along with his six littermates because their owner could no longer care for them.

Emerald with her new family

But it wasn’t long before precious little Emerald caught the eye of a new family, and was at Battersea for just eight days before finding a new home in Kent.

Owner Daniel Seymour explains: “My wife and I have both owned dogs before, but Emerald is our first family dog. He is absolutely gorgeous and we feel so lucky to have him. We heard about Battersea’s Staffordshire Bull Terrier campaign and after doing some research about the breed decided we definitely wanted a rescue Staffie as there are so many looking for homes. We live in the countryside so there are plenty of lovely walks for him nearby. My wife is at home for most of the day and the children give him so much attention – he’s never bored or lonely! Taking on a rescue dog is so rewarding, and Battersea did a great job of finding us our perfect companion.”