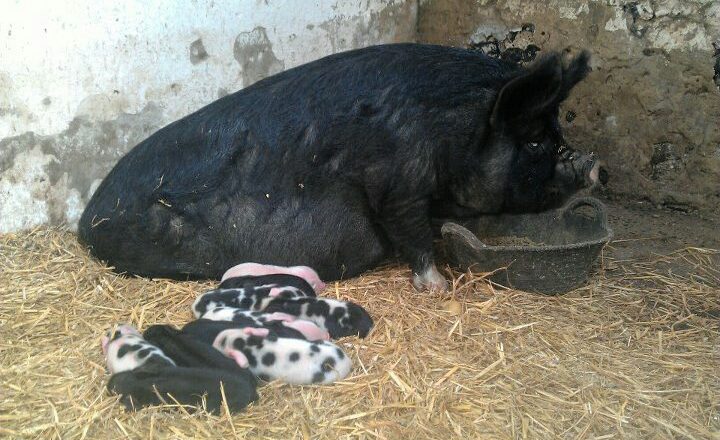 Four pairs of Kunekune pigs are looking for new homes. They were rescued by the RSPCA after being left without shelter in a field in Paddock Wood near Tonbridge in Kent.

The pigs which range in age from a few months to a year old, were kept in four fenced pens with no place to get out of the ice, wind and rain. They had no straw or other bedding. Members of the public had reported that the pigs were escaping onto a nearby road and were in danger of being run over.        Contact: RSPCA, Wilberforce Way, Southwater, Horsham, West Sussex, RH13 9RS.

There were 8 pigs rescued from a tiny pen 4mx4m in the middle of a field in winter. They had to be dug out of the frozen mud where they had no food or water either. You couldn’t even tell if they were male or female never mind what colour they were.

There were five boys and three girls. The biggest boar we named Notorious P.I.G and he has fast become my favourite. Not so much with the boys on the farm as he has a distrust of males and will chomp at the mouth frothing up and charge at them if they come near his field. He (along with all of them) was thoroughly checked over by our vet and it appears he has very large scars from what looks to be severe beatings.

Its taken almost a year, but he now, with me, displays typical Kune Kune behavior and allows me to rub is belly which makes him ‘play dead’ by falling to the side with a thud for more. He loves his three ladies and regularly tries to sneak over the electric fencing in any way he can. Once he even tried to carry his stye over on his back as if we wouldn’t notice a 8ft x 4ft house moving. Haa haa. He has also decided that he needs to be fed first and if I don’t drop his fruit and vegetables off first he barks and grunts and then goes in his stye to sulk. Here he is smiling at his dinner.

The top picture is of the eldest female, Lady Hillary of Woodchurch and she was the first to give birth and her piglets were all healthy and all very time consuming.