Gracie, a nervous black cat and her two kittens 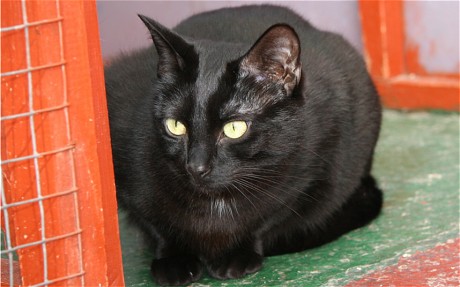 This week’s rescue animal is Gracie, a nervous black cat looking for a home along with her two lovely kittens (who are now young adults). To find out more contact Cats Protection on 03000 121212

Gracie was successfully rehomed in Jan 2013 and is doing very well.

The kittens new owner was devastated after losing two cats within three months of each other last year. She went to the NCAC by chance and fell for the two cats as they were so sad. She collected them with a leaflet about shy and timid cats. Initially they hid a lot under her bed so she put a vet bed with a woolly blanket there for them. At night she can hear one of them snoring softly. She named them Rosy and Ellie – the latter after Ellie the elephant because she thunders around a lot. Both are very lively. She spent a lot of time playing games with them like trailing paper streamers along the house. The cats like to catch them and trot off proudly with them in their mouths just like a dog! Their owner feels playing games with them was key to getting them out of their shell.

Now two months later they are far more friendly and enjoy being stroked. They are starting to go into the garden and like to bird watch under the bush and to chase around it. They also sneak across the grass like super cat without realizing how visible they are. They like snoozing in the sunshine in a basket in a bedroom.

She says they are a delight and pleasure to have and she is very grateful to Cats Protection.