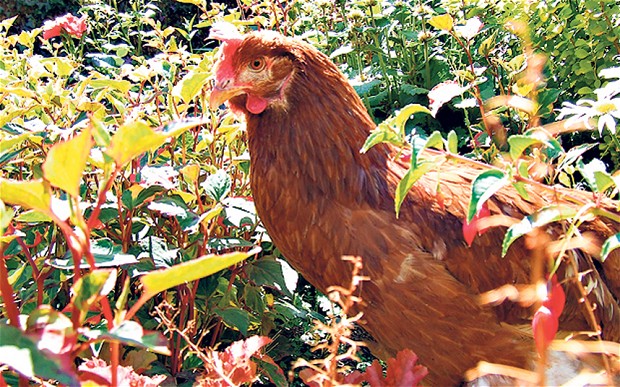 This week’s rescue pet is Hedgehog, so-called because she was bald, with only spiky damaged feathers when rescued. She is one of many birds looking for a home via the British Hen Welfare Trust. To find out more about re-homing, hen sponsorship and the benefits of free-ranging, visit: bhwt.org.uk, email: info@bhwt.org.uk or tel: 01769 580310.

Hedgehog was retained by the British Hen Welfare Trust when she first came out of her battery cage because of a mild limp which needed further investigation.  She stayed at the Devon based ‘henspital’ and over a period of time – and several treatments later – it became apparent that Hedgehog had a mild form of arthritis.  Inevitably she has stayed put and although still hobbling, manages to enjoy life.  Initially she settled in with a flock of wobbly, wonky former feathered colleagues all of whom for one reason or another were not suitable for re-homing, but then one foot worsened and she now lives in utter comfort with a single handicapped hen, called Bunty.

They enjoy a heat lamp on chilly days, have the best deep soft bed a hen could possibly wish for, and have warm meals and drinks served three times daily, the favourite being mash with a little porridge and a handful of juicy sweetcorn niblets scattered on top!  Not that we spoil our hens or anything! Hedgehog has become increasingly approving of this new lifestyle despite her bad foot and she voices this through constant chatter, especially when food is about to be served!

On high days and warm, sunny days, Hedgehog and Bunty venture outside, but only under supervision on soft dry grass…it’s not free range life as we know it, but it’s pretty darned good for two hens that used to live in a cage!