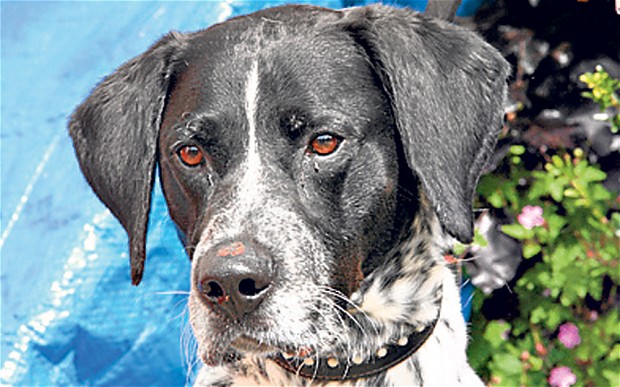 Toby is a seven year-old Pointer-Labrador cross who needs a new home.

He is a dog that bonds closely with people and loves to be around them, although he is shy with strangers. Visitors need to come a few times to build up a relationship with Toby, but anyone who does will be rewarded with a friend for life.

Toby loves playing fetch with tennis balls and will bring them back to you and drop them at your feet. He is a clever dog who has already learnt a few tricks. He would love a home where someone is around most of the time. He has lived with children before and could live with a female dog.

Toby is living at Bath Cats and Dogs Home which is an independent charity that services Bath, Somerset and Wiltshire. The home accepts all dogs, cats and small animals in need and has a non-destruction policy. For re-homing details and to view all of the dogs looking to be adopted, visitbcdh.org.uk or call 01225 787321.

Toby the Pointer Labrador cross had been handed in to Bath Dog and Cat Home because he was being left alone all day and would howl and upset the neighbours. After being featured in Pet Subjects in July 2012, Toby was rehomed to the Brown family in Wiltshire. He still hates being left alone but his new family has a lifestyle that suits him: Toby goes everywhere with them, whether it’s work or holidays. In recent months he’s even travelled up to Scotland and North Yorkshire, occasionally (and naughtily) sticking his head out of the car, admiring the view and taking in the country air.

Mr Brown explains: “Toby has settled in well, he’s certainly fallen on his paws. It feels like he’s been with us for ages. He’s a very affectionate dog and the ultimate family pet. Since he still hates being left alone in the house, I take him with me in the car to work and he is proving to be a great traveller and reliable co-pilot. Toby and ‘the cat’ however are still getting to know each other, they tend to look very puzzled – almost shocked – when their paths cross in the back garden”.