Sophie and her son Selwyn. 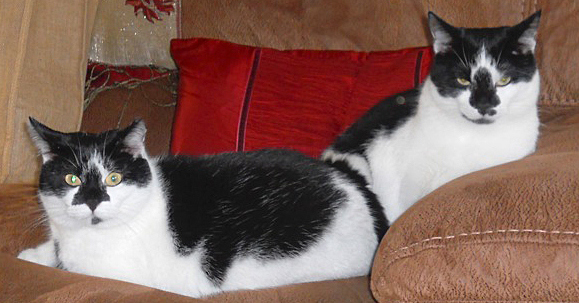 Sophie and Selwyn appeared in the Telegraph last year.

Sophie is approximately 18 months old. She came to Cats Protection with a litter of four kittens, of which all have been rehomed except Selwyn, who is now 1 year old. Ideally they would be homed together but this is not vital. Both cats are wary of strangers, although their confidence is slowly growing and Selwyn now enjoys a fuss and a comfy lap to sleep on. They need an adult-only home, preferably with people who have experience of timid cats. If you live in the Wolverhampton area and would like to find out more about adopting these cats call 01902 651173 or visit www.wolverhampton.cats.org.uk

‘After the feature on Sophie and Selwyn we had a call from a retired lady interested in homing Selwyn, her elderly timid cat had died and she was ready for a new companion. Following a successful home visit, she appeared to be perfect for Selwyn, with a quite home and no children or dogs to spook him.
He moved into his new home but unfortunately despite all efforts from his owner and support from Cats Protection he could not settle, and came back to his foster home. After a few spats from his Mom Sophie he settled in happily. In the end, both Sophie and Selwyn have now been adopted by their foster folks as this is where they’ve felt most comfortable and relaxed.’