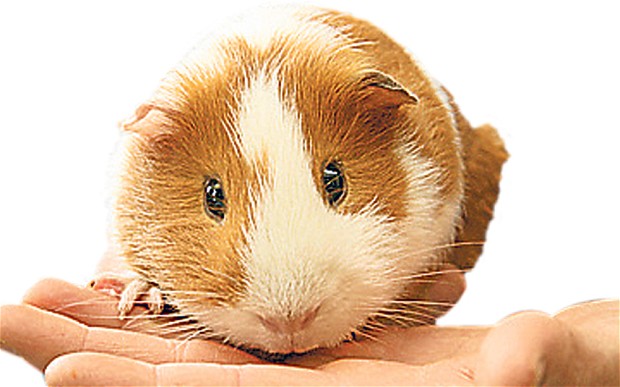 Friendly guinea pig, Bill, is very cute and lovable. Although shy initially, he quickly gains confidence and is happy to be picked up and cuddled. He enjoys plenty of fresh hay, guinea pig food mix, fresh water and a selection of vegetables – carrots and greens are his favourites. Wood chews also keep him busy and his teeth well filed. Easy to handle, easier to pick up and hold with small hands than rabbits and less likely to wriggle around and be dropped, guinea pigs are good-natured and perfect for very small children (under close adult supervision, of course).

Bill came to the home because he was being ‘bullied’ by the other guinea pigs. So, his former owners wanted to find him a loving new home where he could live in a calm environment and be spoilt rotten. And this is exactly what he found.

Bill is now living the life of Riley with the Steemson family in Corsham, Wiltshire – he was rehomed in April 2012.

Bill has decidedly gone up in the guinea pig world and now rubs shoulders with Bantam rescue chickens and new best friend Otis and Grey the family cats. Bill is decidedly very relaxed in his new home, he even likes to lie in his hay rack and fall asleep chewing on favourites such as dandelion leaves and carrot tops. He’s recently discovered green peppers, which is his equivalent to guinea pig ‘caviar’.

Mrs Steemson explains: “Bill, or William when he’s being told off, is such a friendly and happy guinea pig who likes to nuzzle the chickens and family cats who come to visit. Bill now lives in his very own ‘outdoor bungalow’. When Bill first arrived with us he would always run inside and hide. Now though, he comes up to the mesh to say ‘hello’ and check out what goodies you might have. Bill doesn’t mind being handled, but this is still very much a work in progress. His ‘best friend’ is Otis the ginger cat who spends most of the day sleeping on top of Bill’s run. Doris the hen also has a special soft spot for Bill, she and Bill often like to touch noses (or beaks) through the mesh of the run.”