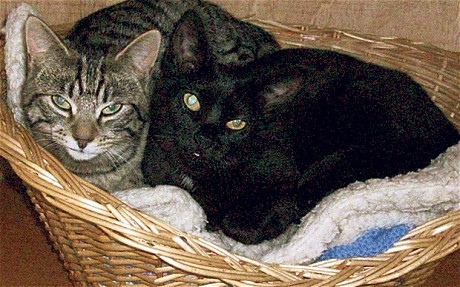 In February 2012 the rescue pets were Faith and Hope.

Faith and Hope are one year old female neutered cats that are positive for Feline Leukaemia. They have each been tested four times for the virus, each time with the hope that they might no longer be positive: this is why they have their names faith and hope. Feline Leukaemia is a viral infection which carries no risk whatsoever to humans, but it is potentially infectious to other cats. There is an effective vaccine against the disease, which means that Faith and Hope could live with other cats as long as they are vaccinated. They will need to be kept indoors to prevent them from spreading the disease to unvaccinated cats in the neighbourhood. These two cats need a special home together: if you can help, visitwwwcatrescueflyde.co.uk or phone01253 720357.

Faith and Hope were both positive for Feline Leukaemia Virus, which meant that they had to be kept indoors, away from other cats, to prevent the disease from being passed on to others. Their mention in the Weekend Section was noticed by John, who happened to have the ideal set up for them. They now have the run of a large house, running through a covered tunnel to a large playpen and run in the garden.