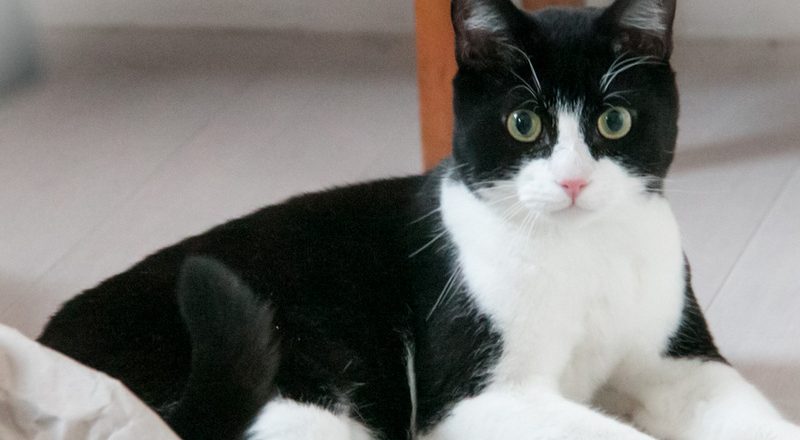 Prosecco is a beautiful young male cat who has been through a lot in his life. Most likely, he was lost or abandoned as an un-neutered kitten and had to fend for himself as a stray, searching for food and shelter. He found a kind person who became his feeder. One day that person found Prosecco collapsed and almost lifeless and rushed him to the Celia Hammond Animal Trust. Prosecco was extremely anaemic and close to dying. He was taken into intensive care and received a blood transfusion. It was touch and go but being a determined young boy he pulled through and slowly recovered and gained weight. However, this meant he had to spend weeks in our ward and with growing physical strength his frustration also grew. He was known to be temperamental and sometimes lashed out. On top of all he developed a food allergy and had an upset tummy for a long time. He is now fine on normal good quality cat food.

Finally Prosecco was well enough to be neutered and was taken into short-term foster care and received lots of love and tenderness. Initially Prosecco was terrified and aggressive, with hormones still circulating. It took him a couple of weeks to relax and to trust his human foster carer.

Prosecco has now become the most playful, affectionate and cuddly little boy. He is clever, with a great sense of curiosity and adventure. He loves chasing the laser, strings or ferret toys. He is a boisterous player and is too much of a nuisance for the older cats in the foster home. Prosecco enjoys being outside climbing trees and fences but he always comes back when called and relaxes snuggled up, purring. He is also quite vain and loves looking at himself in the mirror! Prosecco is around 18 months old and is looking for an experienced owner as an only cat. He has learned to trust a human but occasionally gets spooked and can lash out. This is likely to improve with time.

WHAT HAPPENED NEXT?
Message from his new owner: I renamed him Percy. Percy is lovely I am so glad we have him. We bought a large cat tree for Percy and placed it near a full length mirror as you said he likes to look in the mirror. It is now where he likes to sit and sleep every night. He is doing really well and follows me everywhere and wants to be close all the time. He’s so affectionate.