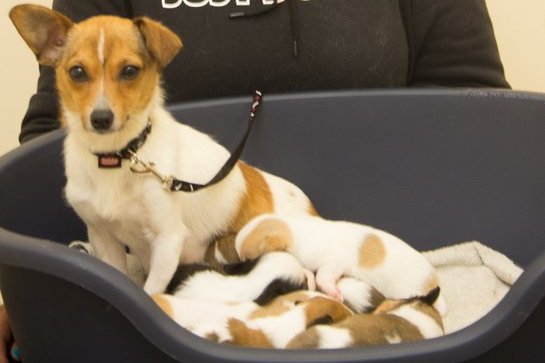 Madeline has taken two dogs into her home in the past two years. Buddy, the male dog, was the first to arrive; she took him in from a rescue centre, and while he’d settled in very well, Madeline thought that life would be more fun for him if she found a friend for him. So a year ago, she went to another rescue centre where she found Bella. She was just a puppy, but straight away, Madeline could see that she had a gentle but playful personality. She got on well with Buddy from the start, the two dogs playing together and obviously enjoying each other’s company.
Madeline realised that long term, she’d need to either get Bella spayed, or Buddy castrated, but she wasn’t sure which would be the best to do. She decided to discuss this with the vet when the dogs had their annual health checks and vaccinations in the summer of 2018. They would be just over a year of age at that point,and it seemed soon enough.
Then to Madeline’s surprise, in late February, Bella came into season. She was only about ten months old, which, in fact, is common. Female dogs can come into season at any age from five or six months of age, and just because they are young and small does not mean that they cannot get pregnant. Unplanned pregnancies are very common in this type of situation because owners just don’t realise the high risk of this happening.
The first sign of Bella being in heat was that Madeline noticed drops of blood on the kitchen floor. She tried to deal with the season by getting a doggy nappy, which attached to Bella’s rear end. The idea was that this would keep the house clean, and it might also stop Buddy from showing interest in his house mate. Perhaps the theory was reasonable, but in practice it didn’t work:  Bella didn’t like wearing the nappy, and she kept taking it off.
Madeline’s second plan was just to try to keep the two dogs apart. She knew that the season would last around three weeks, so she started to keep them in separate parts of the house so that they couldn’t have unsupervised time together. Again, this was a good idea in theory, but in practice, it was difficult: the two dogs were such good friends that they didn’t like being separated, and they cried when they were apart, scratching at the door between them, making it clear that they wanted to be together.
So Madeline moved to her third plan: the two dogs could be together, but she would watch them closely all the time to make sure that they didn’t mate. This worked well at first, but then life got in the way. One day, Madeline was temporarily distracted from keeping an eye on her dogs, and when she remembered to check them, it was too late.
Buddy and Bella were mating, tied together in the way that happens with dogs. She phoned her brother at once to find out what she could do, and she learned that the answer was simple: nothing. There is no point in trying to separate dogs that are mating: you just have to wait for twenty minutes or so until they separate naturally.

Madeline only saw them mate once, and soon enough, Bella’s season was finished. She hoped that she might have got away with it, but within a month, it was obvious that Bella was pregnant. She developed a pot belly and a huge appetite. Madeline read up about pregnancy in dogs, discovering that it would last about two months. She offered Bella plenty of food, with four or five meals a day, and the little dog’s abdomen grew bigger and bigger.
The pups were born in late April: Bella managed to whelp easily, all on her own, producing six healthy wriggling sausage-like pups. She’s been a good mother, spending most of her time with the pups, ensuring that they have had a continual supply of her milk. If any wriggle away from her, she gently nudges them back, curling her body around them to keep them snug, warm and safe.
Madeline brought them to see me last week: the pups are now two weeks old, so it was time for them to have them checked over by the vet. They were all healthy, and I gave each of them a worm dose. I also talked to Madeline about making sure that there are no more unplanned pregnancies.
Madeline was not sure about which dog to get done: Buddy or Bella. I explained that it’s best to focus on the female dog: there are many health benefits from spaying for females, including a huge reduction in the risk of mammary (breast) cancer later in life.
Bella can’t be spayed immediately: her pups still need her with them, all the time. So the operation has been scheduled for two weeks from now, when the pups will be five weeks old. By then, they will be eating proper meals rather than just suckling from Bella, so they will be able to cope without her for 12 hours.
Buddy is being a typical doggy dad: he is curious about his pups, but he’s not involved at all.
Bella’s in charge: she’s the Mum, and despite her youth, she’s turned out to be the best possible mother these little pups could have.
Spayaware, supported by vets and ISPCA, runs an awareness week in late May, stressing the importance of neutering and spaying pets. See www.spayaware.ie 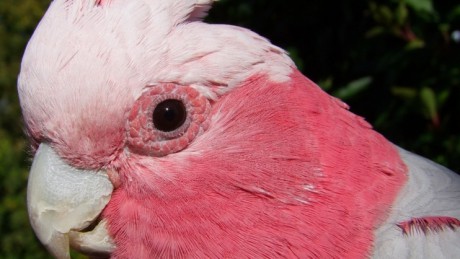 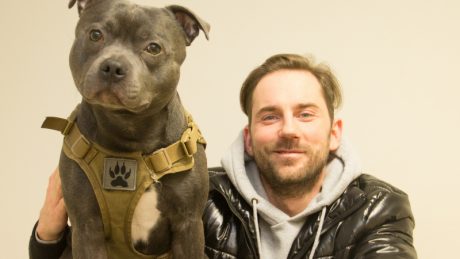