Caper the hen with a swollen crop

Andrew has six backyard hens: they’re shut up in a henhouse at night-time, to protect them from the local fox. When he opens the door in the morning, the hens are always eager to get out and about. Last week, five of the hens rushed out as usual, but Caper held back, standing around quietly at the back of the henhouse. Andrew picked her up for a closer inspection. She didn’t struggle or try to get away from him: this wasn’t like her at all. The hens usually do everything possible to avoid being restrained.

Andrew checked her over, and he could feel a large, soft swelling on her front, in her lower neck or upper chest area. In a healthy hen, you can just feel the bony contours of the bird beneath the feathers. Instead, it was as if somebody had stuffed a pillow under the surface of Caper’s skin. Andrew realised that this was not at all normal, so he brought her in to see me.

Caper had a swollen sour crop

As soon as I laid my hands on Caper, I realised that this was a classic example of a common problem known as “sour crop”. The part of her body known as the “crop” had gone badly wrong.

The anatomy of hens is different to mammals. When food is eaten, it passes through the beak, into the mouth, then down the gullet, but instead of going straight into the stomach (as in mammals), the food goes into a balloon-like structure called the “crop”. This is like an extra storage tank, allowing hens to eat a lot of food rapidly, without over-burdening the stomach. Food gathers in the crop immediately after it’s been  swallowed, and then trickles gradually into the stomach, which is the next structure further down the digestive system. This ensures that the stomach receives a steady, slow supply of food, rather than occasional sudden large surges at mealtimes.

The most common health problem to affect the crop happens when it becomes impacted with food or other ingested material such as grass, straw or hairs. A blockage can form at the exit of the crop, so that instead of food emptying into the stomach, it stays in the crop, causing it to become more and more swollen. As the crop fills up, its contents remain warm and moist: the perfect environment for the growth of bacteria and yeasts. The accumulated food in the crop becomes infected, producing a strong, foul, smell, like milk that’s gone off: this is why the problem is known as “sour crop”. I could smell the classical rancid odour coming from her mouth when I examined Caper.

Treatment of sour crop can be tricky. The crop has to be emptied repeatedly, by gently milking out the large quantities of semi-rotten food that has gathered inside it. This can be hazardous: a hen can easily choke on her own crop contents when it’s being done. I have seen hens die in the process, so inexperienced hen owners should never attempt it. I showed Andrew how to  empty the crop, holding Caper carefully on her side, and  ensuring that her airway didn’t block while he worked on her.  I then treated the yeast infection by giving her baking soda in her water.

Caper’s crop is not completely better: she still has a puffed up, swollen area on the underside of her neck. But the sour smell has gone, and she’s regained her strength. This is the simplest, most accurate test of a hen’s health: Andrew knows that if he can’t catch Caper in the morning, there isn’t too much wrong with her. 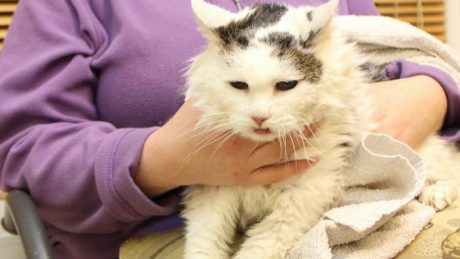 Susie is a 20 year old cat who has diabetes 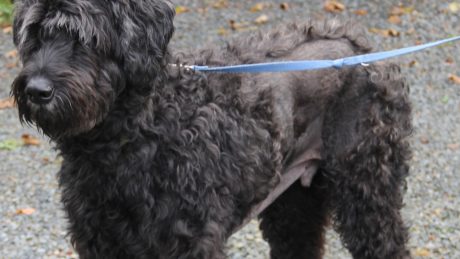