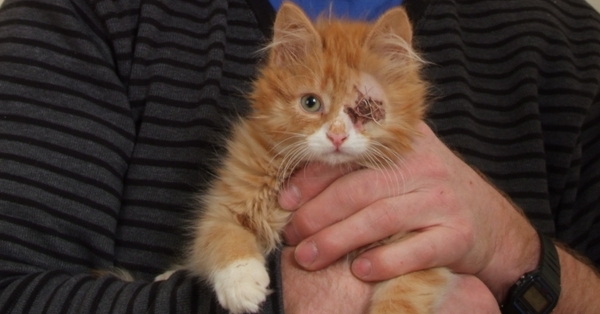 Michael and his family are animal lovers, sharing their home with a scattering of dogs and cats. The ginger kitten is the latest to join their menagerie. Michael’s 20 year old daughter saw the kitten with its mother at a friend’s house. She liked the look of him, and ended up bringing him home. She called him “Edward Cullen” after one of the heroes in the Twilight movie, but of course, his name was soon shortened to Edward, and as he has become part of the family, it looks like Eddie’s may soon be his day-to-day name.

The kitten was bright and healthy at first, but a couple of weeks after his arrival, he developed a painful left eye. He started to keep the eye closed, and a yellow discharge dripped from the eye down his cheek. Edward was brought to the vets as soon as the Murphys noticed that there was something wrong, and when I saw him, it was obvious that he had a serious problem affecting his left eye.

Edward had a deep ulcer in the centre of his left eye: something had damaged the front of the eye, creating a crater-like dent in its surface. It could have been caused by trauma (such as a fight with another kitten) or it could have been a virus, but the result was the same: his eyeball was seriously injured.

The eyeball is a complex structure, but it’s very resilient and it’s well-protected by the body. The boney eye socket is the most important part of the eye defences. If there’s any physical blow to the head, the eye bobs back deep into the safety of its protective socket. The eyelids offer the next level of protection. Automatic blink reflexes ensure that if anything moves towards the eye at speed, the eyelids clamp shut, providing a natural shield to stave off an assault. The third and final layer the eye’s protective shields is the structure of the eyeball itself. At first glance, the eyeball seems like a balloon, with a thin outer layer enclosing it contents. On closer examination, it’s much more complex: instead of one single layer (like the surface of a balloon), the eyeball is enclosed in multiple microscopic layers, like the different layers of an onion. If the outermost layer is damaged, there’s another protective layer inside. And if that one’s damaged, there’s a further layer inside that. And so on. The multiple layers, like repeated coats of paint on a building, ensure that the sensitive structures inside the eye are well protected.

Unfortunately, a kitten’s eyeball is particularly sensitive, and the injury to Edward’s eye had penetrated through all the layers of defence, to the point where the eyeball had almost ruptured, with the jelly-like contents of the inside of the eye bulging out through the damaged area. The eye was painful, and although in theory an eye specialist might have been able to use complex and expensive techniques to save it, his vision had already been irreparably damaged. After discussing the situation, it was decided that the smoothest, least painful and easiest option would be simply to remove his left eye.

One-eyed cats rapidly adapt to life without binocular vision, and once the fur grows back over the side of his  face, it will be hard to even notice that he has an eye missing.

Edward himself is quite happy abut the situation. Just one week after the operation, he’s already back to being himself, playing games, chasing around, and generally behaving like a normal kitten. 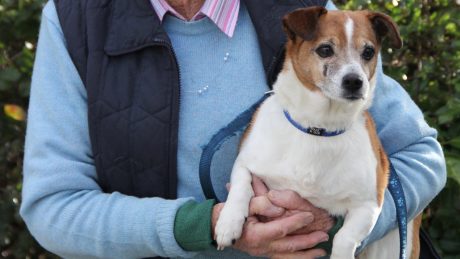 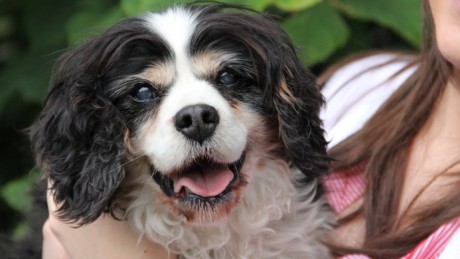 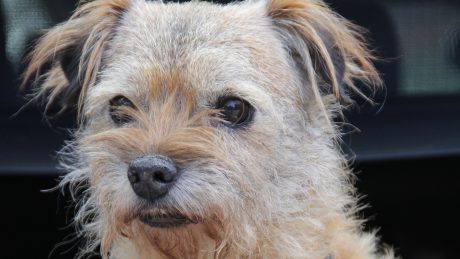