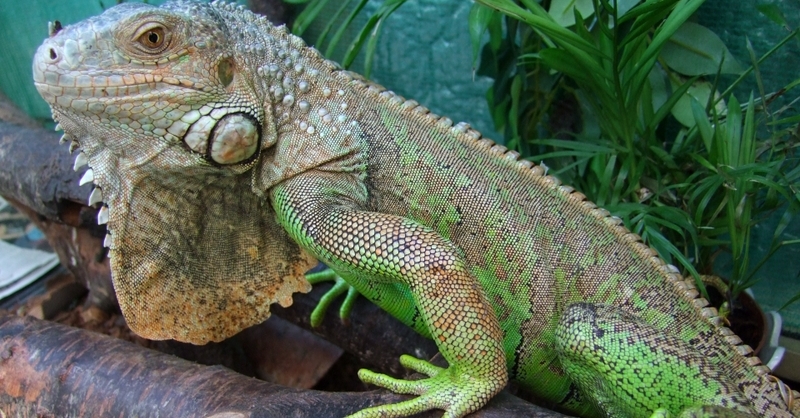 Alice came across Fletcher on an internet “for sale” website. He’d originally been bought for someone who couldn’t keep him, and he’d been sidelined out to a garage where he never saw humans. When he arrived in Alice’s home, he was frightened of people. He used to dash about the place, swishing his tail and snapping at the air in fear. Visitors were sometimes frightened of him, but he never bit or scratched anyone; he was just trying to run away. He was less nervous on a one-to-one basis, and Alice spent time with him every day, reassuring him and getting him used to being petted. He’s now been with her for nearly a year, and he’s become a calm, relaxed individual.

He lives in a large, heated, wardrobe-sized vivarium in Alice’s living room. She’s done the research, and she’s made sure that he has an environment that’s just right for him, including a special ultra-violet light for him to bask beneath. He’s a big lizard, and even a large vivarium has limited space for movement, so Alice lets him out every day for exercise. He enjoys a swim in the morning, stretching out in the family bathtub, paddling around in foot-deep warm water. He can keep his head beneath the surface of the water for up to half an hour; the soaking helps to maintain the correct level of hydration in his body.

Fletcher always has a healthy breakfast after his swim, and he’s a pure herbivore. He enjoys greenery, including leaves from broccoli, cauliflower, Brussels sprouts, dandelions and carrots. He also eats fruit, such as apple and banana, and he has an all-important calcium supplement every second day. He was underweight when he arrived, so Alice has developed a habit of hand-feeding him; as well as fattening him up, this has helped to tame him. He’s almost full sized now, measuring over a metre from his head to the tip of his tail.

Green Iguanas are tree-climbing lizards from South America, and Fletcher often has a strong urge to clamber up to a height. Alice allows him to amble around the family home, but she needs to watch where he goes. He can run across a room at speed, like one of those Velociraptor dinosaurs from the Jurassic Park movies. When he reaches a climbable surface, he just goes straight up, like Spiderman scaling the side of a sky scraper. He rushes up curtains, stretching himself out across the top of the curtain rail and surveying the world beneath him. He also enjoys clambering up a plain bricks-and-mortar wall in the kitchen, somehow supporting his own weight with his claw-like feet until he reaches a shelf close to the ceiling where he can rest.

Alice took him outside on one occasion, after getting him to wear a rabbit body harness so that she could control him at the end of a leash. It went well at first, but then he started to run, and when he saw an old Chestnut tree, he began to wriggle out of the harness in an effort to escape so that he could scramble right up the side of the tree trunk. Alice had to struggle with him to bring him back indoors; the thought of calling the fire brigade to fetch a pet lizard from the top of the tree did not appeal to her.

Fletcher’s not a typical household pet, but he’s fitted well into Alice’s home. He may not bark, but his size and appearance might be more likely to deter any would-be-burglar than any guard dog. 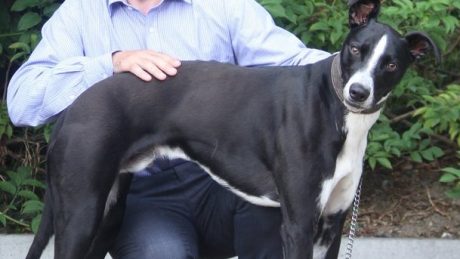