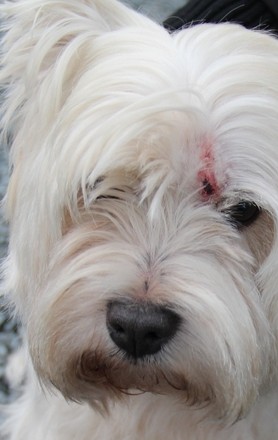 Hector is a male terrier, but he has never shown aggression to humans or other dogs. When other dogs pass by, he usually ignores them. Occasionally he’ll pause to greet another dog nose-to-nose: the two animals spend a few minutes sniffing each other all over, then they move on. Hector never growls or snaps.

One of Anne’s favourite walks with Hector is the River Walk, in Powerscourt Estate near Enniskerry, which includes over three kilometres of winding walkways through local woodlands, with the main path following the bank of the River Dargle. It’s an ideal dog walking area, and it can be a busy place, with many local people exercising themselves and their pets along the riverside.

Hector and Anne enjoy the River Walk three or four times a week, often in the mid-morning. One week, Hector found himself the victim of the doggy equivalent of a mugging, and he was the innocent victim.

Anne had Hector on one of those extendable “flexi” leads which allows her to give him enough loose leash to run around, but to draw him close to her if there’s any reason to do so.

She saw two ladies coming towards her, chatting to each other as their large dogs walked close by, off their leashes. One of the dogs – a big Labrador type – approached Hector, and the two animals had the usual type of sniffing session that Hector enjoys. All of a sudden, for no obvious reason, the bigger dog became violently aggressive to poor Hector,  snarling and snapping at him. He then grabbed Hector by the scruff of the neck, shaking him like a rag doll. Anne did her best to pull her dog out of danger. At one stage, she had Hector dangling from his lead as she tried to lift him to safety, but the big dog kept coming back at Hector, grabbing him by the neck again and again. The dog kept dropping Hector, then picking him up and shaking him again; it happened three times. The animal was snarling, and Anne felt that her own safety was at risk. Eventually, she managed to pick Hector up and get him out of the dog’s reach. She shouted at the other woman to get her dog under control.   At that stage, Anne thought that Hector wasn’t going to survive after the mauling that he’d received.

Eventually, the woman managed to pull her dog away. She apologised, saying that it was something that had never happened before.

To Anne’s surprise, Hector seemed almost unscathed by the attack. He was understandably quieter than normal, but there were no obvious injuries. It was only later when Hector yelped when she patted his head that she realised there was a problem, and she brought him to see me. I found a deep bruise over his left eye, but he’d been lucky: his long, dense fur had protected him from serious injury. Anne was relieved that he hadn’t recently been to a groomer for his usual short clipping: the situation could have been far worse.

As a vet in practice, I see this sort of situation regularly, and it doesn’t always work as well as it did for Hector: I have seen small dogs killed by large aggressive dogs. My message for all dog owners is this: keep your animal under control, as you’re obliged to do by the law of the land. Accidents will always happen, but if your pet has attacked another dog before, there’s a significant risk that he’ll do it again. If in doubt, keep him on a leash. 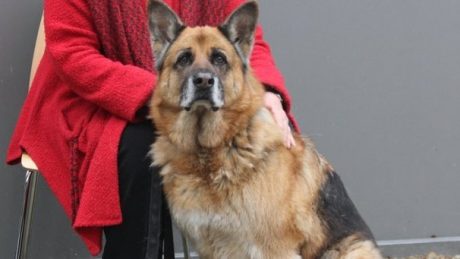