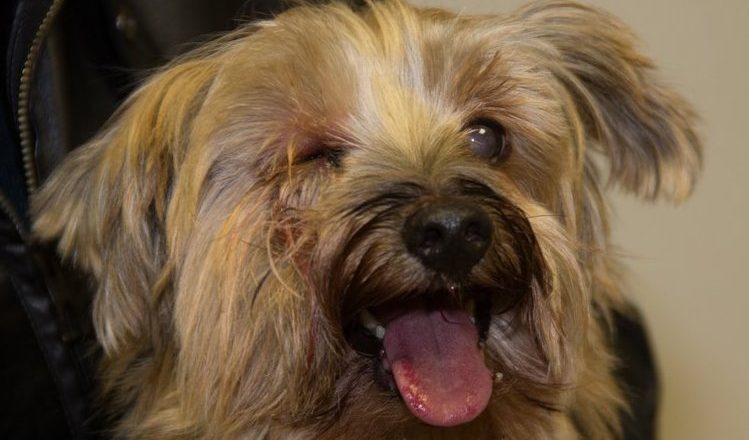 Koji is an important part of the household: he even sleeps on the bed beside John and his wife every night, along with their other dog, Molly.
Koji has always had a tendency, like many dogs, to rub his face along the ground from time to time. He does it almost like a type of play behaviour, when he’s excited. He rubs one side, then turns over, rubs the other side, then he leaps up, jumping around, full of energy. He sometimes does this on the carpet indoors, and he’ll also do it outside, on the grass. Many dogs do this, and it’s thought to be a type of scent marking behaviour that dogs do to let other animals know about their territory.
Around a week ago, Koji started to rub his face along the ground far more than usual. When he was sitting on the sofa, he started to repeatedly rub his face on the cushions, and at night, he rubbed his face on the pillows at the top of the bed. This seemed different to the usual scent-marking face-rubbing: he was choosing soft objects to rub against, as if his face was itchy and he was seeking relief. The skin on his face looked normal, but it was strange to see him behaving like this, and John decided that he’d bring him in to see me soon.

Then he had one particularly bad night, when he was rubbing his face more than ever, and he wouldn’t sleep, fidgeting around all night long. John’s other dog, Molly,  normally has an antagonistic relationship with Koji: the two dogs tend to growl and snap at each other. But now her attitude changed to her housemate. She started to “kiss” him, pushing her face up towards his face, gently licking the reddened area.
By the time the morning came around, the right side of Koji’s face was reddened and obviously sore, and there was so much swelling around his right eye that it was almost completely closed. John phoned my clinic first thing, and brought Koji in to see me.

Koji isn’t the easiest dog to examine: he’s a little wriggler. When I tried to look closely at his face and mouth, he squirmed away from me. I was able to see enough, however, to know what the problem was.
As well as Koji’s face being reddened and swollen, a small wound had opened up in the middle of his cheek, and this was discharging reddish-brown pus. Koji had the classic signs of a tooth root abscess. As the infection built up around the tooth root, it would have made Koji’s face feel itchy and sore. An odour would have been produced that Molly would have found intriguing, which is why she was licking his face. And the small wound was a sign that the abscess had burst, and it was now draining to the surface through this small opening.
There’s only one way to treat tooth root abscesses in dogs: the infected tooth has to be extracted under general anaesthesia.
There’s one particular tooth at the top back of a dog’s mouth that is prone to developing an infected root: it’s known as the carnassial tooth. This is a large, cuboid tooth that’s one of the main teeth used to grind up food: the word “carnassial” is derived from the same origin as the word “carnivore”, meaning flesh-eating. It’s a type of tooth that is unique to carnivores like dogs and cats, and it’s evolved to make it easier to chew tough gristle and even pieces of bone.
The carnassial tooth has three roots, and for some unknown reason, one of the roots often develops a bacterial infection. When this happens, an abscess appears around the root of the tooth, with all of the signs that Koji was displaying. The only way that this problem can be cured is to extract the carnassial tooth. The tooth root abscess was causing pain and distress for Koji, so I admitted him to our hospital to carry out the extraction immediately.

koji neeeded to be anaesthetised

All animal dental extractions need general anaesthesia: local anaesthesia, as in humans, is not sufficient, as animals won’t sit still enough to allow their mouths to be worked on in the same way as people.  Once Koji was fully anaesthetised, I was able to inspect his teeth in detail. The affected carnassial tooth was obvious: I could see pus oozing from its base. The tooth was still firmly attached by two healthy roots: the abscess only affected one of them. This made the tooth surprisingly difficult to extract: I had to use a special dental saw, similar to a human dentist’s drill, to cut the tooth into three segments. Once I’d done this, it was easy to extract each root in turn. As I pulled out the infected root, there was a rush of pus: this was definitely the source of the problem.
While Koji was anaesthetised, I checked the rest of his teeth. Like many older dogs, he had a build up of dental tartar, with other teeth that were loose and needed to be extracted. I gave Koji plenty of pain relief, as well as a course of antibiotics to clear up the infection.
John came in to collect Koji that same evening. Already, the little dog seemed happier; that tooth abscess must have been bothering him, and it was a relief now that it had gone.
After a few days of soft food, Koji made a full recovery. John’s taking new steps to keep Koji’s teeth healthy from now on, with dental chews and occasional tooth brushing. One dental crisis like this is more than enough!