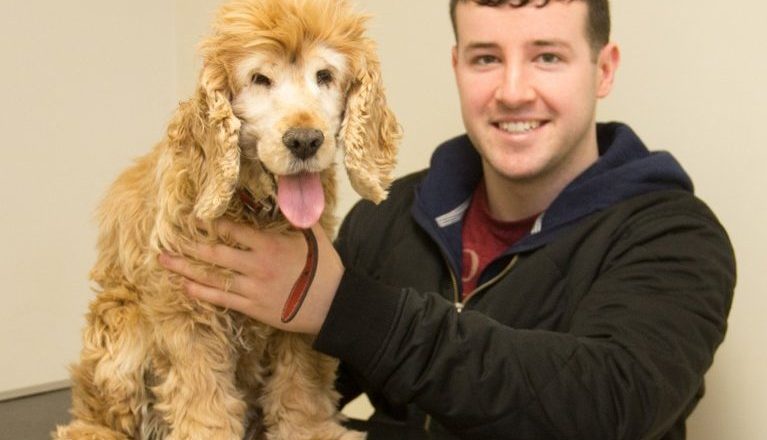 Michael was fourteen years old when Lucy came into his life. She was five years old by then: his Mum had wanted a family dog, and she had made a deliberate decision to choose an adult dog rather than a puppy. Life was busy at that time, and the thought of caring for, and house-training, a puppy, was too much. A ready-to-go well-trained adult seemed like the perfect option.

It can be difficult to find an adult pedigree dog like a Cocker Spaniel, but the sequence of events just fell into place. A friend had just bought a puppy, and when Michael’s Mum contacted the breeder to ask about older dogs, he decided that Lucy was ready to be rehomed with a family. She had already had three litters of puppies, and he had decided that enough was enough: it was time for her to retire as a breeding animal. Part of the deal in taking her was that she should not be used for breeding any more: she was spayed soon after they’d taken her on.

lucy had to learn to adapt to normal life

Lucy had lived a restricted life until she came to live with the family, and it took her a while to adapt to normal life. She had obviously never been out walking on busy streets, and she was terrified of traffic. Michael could not take her for normal walks at first; they had to stay on quiet back streets. Over time, she gradually became used to passing cars, and eventually she could walk comfortably beside any type of traffic, like most well adjusted adult dogs.

She was overweight – verging on obese- when she arrived, and Michael remembers that he was not impressed. He’d wanted a fun, friendly, lively companion, not an anxious, tubby older animal. But after giving her measured amounts of good quality food for a few months, as well as plenty of exercise, Lucy slimmed down, and she’s stayed at her optimal body weight for most of her life. Michael soon bonded with her, and they’ve now been best friends for most of both of their lives.

Lucy has been a healthy dog for most of her life. She did have some digestive upsets at one stage, and the family learned that they had to keep her on a specific brand of dried food to avoid bouts of vomiting and diarrhoea. She also developed an underactive thyroid gland when she was ten years old; this has been successfully treated with thyroid supplement tablets which she still takes every day.

Last week, Michael brought her to me with a new problem: she had developed a small tumour on the right side of her head, above her ear. It had started off as a small growth resembling a wart, and nobody was too concerned. Like many older dogs, she has a number of wart-like lumps all over her body, and they don’t bother her at all. However the one above her ear started to grow bigger, and when she came to see me, it was 2cm diameter, like a large marble. It had started to ooze blood from its surface, and it was beginning to bother her. She scratched at it from time to time, whining as if it was sore.

Something had to be done to help her, but it was difficult to make the right decision. She was eighteen, and although she seemed to be in good health, she was an exceptionally elderly dog. Most Cocker Spaniels only live to be fourteen or fifteen. The family were worried that she might not survive a general anaesthetic. I explained that we could make it as safe as possible, by carrying out screening tests like blood samples and heart scans, but it was impossible to remove all risk from such a procedure.

I then suggested an alternative: she was such a good-natured, calm dog, that I could remove the tumour using only local anaesthetic. We agreed that this was the safest option, and Lucy was admitted to our clinic for this to be carried out.

A veterinary nurse reassured Lucy while I infiltrated the area around the tumour with local anaesthetic. This numbed the area, and I was then able to cut around the tumour with a sharp scalpel blade. Lucy didn’t even notice that anything was happening. I used a special surgical stapling gun to close the wound. It looked odd afterwards, as if it had been closed with a metal zip.

It will take a couple of weeks for the wound to heal completely, and Michael is keeping Lucy as quiet as possible. Once the staples have come out, she’ll be able to return to her normal active walks. She may be eighteen years old, but I’ve known dogs to live into their early twenties, and we’re all hoping that Lucy is going to do exactly that. 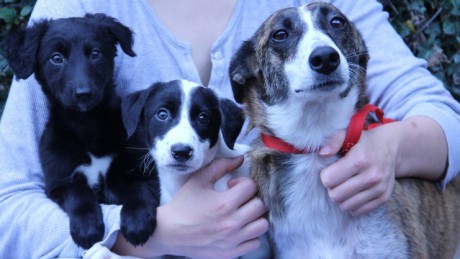 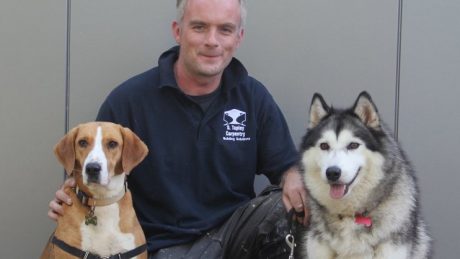 Buster and Echo are both five year old dogs 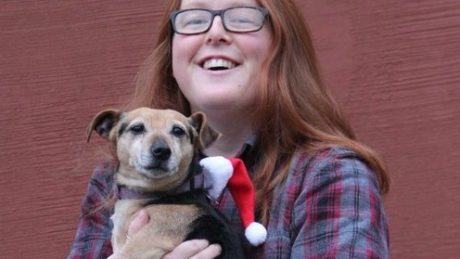