Kyra chose Monty as her new family dog carefully: she wanted a cross-bred animal to avoid the common illnesses and genetic issues that are seen in some pedigree dogs. She found out about Monty online: his breeder had just taken one litter from his family dog, and Monty was one of the five puppies that had been born. Everything had been done properly, in the same way as it would normally be done for well-bred pedigree dogs. Monty had been microchipped, wormed, and he’d had his first vaccinations. He had been well socialised, mixing with his litter mates and with the humans in the household where he’d been born. Kyra knew that he was the right one as soon as she met him: he’s a tail-wagging, bright, cheerful puppy.

Time to pick Monty up and bring him home

Monty was in great form when Kyra picked him up from his breeder’s house, and he was well-behaved on the one hour drive to his new home. He ate his supper hungrily and he was keen to play with his new human housemates. But a couple of hours after arriving, the problem started: Monty began to cough. At first Kyra thought that he might have just eaten his food too quickly, and inhaled a few crumbs. But he kept coughing throughout the evening, and she heard him coughing overnight when he should have been sleeping. Kyra brought him in to see me first thing the following morning.

Monty was bright and cheerful when I examined him, with bright eyes and a wagging tail. His temperature was normal, but his breathing was laboured, and he was coughing several times a minute. When I listened to his chest with my stethoscope, I could hear rattles and crackles, indicating that there were serious changes happening in his lungs. I admitted him to our clinic to take x-rays so that I could find out more about what was going on.

It’s easy to take x-rays of humans: you can just ask them to sit still, and even to hold their breath for a moment. With animals, sedation is needed: Monty was so full of energy that he would never stay in one place for long enough to take an x-ray.

An x-ray was needed

I used short acting sedation, giving me enough time to take a series of different views of his chest before allowing him to wake up. The x-rays showed that he had patches of pneumonia in his lungs: it was no wonder that he was coughing.  There are several possible causes of pneumonia in young puppies, but the two most likely reasons were first, worms, and second, a bacterial infection. It was possible that Monty had a combination of both of these at the same time.

Puppies pick up worms from suckling their mothers: there are worm larvae in bitches’ milk. The worms pass from the pup’s digestive tract into their bloodstream, and sometimes they settle in lungs, causing pneumonia. Monty had been wormed previously, by the breeder, but repeated worming is always needed for puppies, so I gave him another dose straight away.

I also set him up with an intravenous cannula to give him a high dose of rapidly acting antibiotic: pups have immature immune systems which makes them prone to overwhelming bacterial infections. While adult dogs may only suffer an irritating cough following a respiratory infection, I’ve seen puppies die of pneumonia within a day of starting to show signs. A high level of antibiotics for ten days was a critically important part of Monty’s treatment.

Monty went home that evening, still in great form, and still wagging his tail. He still had an occasional cough, but he wasn’t coughing as often as he had been. 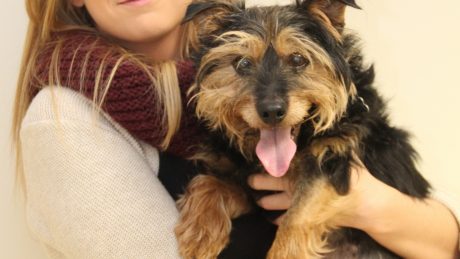 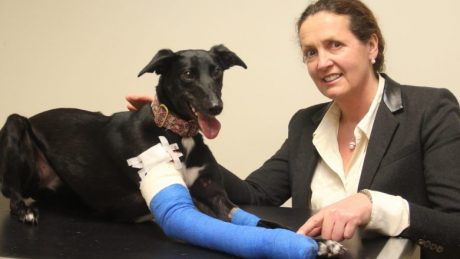