Pulse Port Triathlon has become one of my regular races

I’ve been doing triathlons for a decade, which means that I’m at the stage where I’ve done some of the regular races several times. This was the 8th sprint triathlon that the Pulse Triathlon Club have organised at Port Beach, Clogherhead, Co Louth, and it was my third time to do it. So I already knew what to expect, which helps with the pre-race planning. There was no need to drive around the bike course or to pace out the run route beforehand: I already know them well. In any case, as usual, the helpful and friendly club marshals made it easy to find the way on the day. 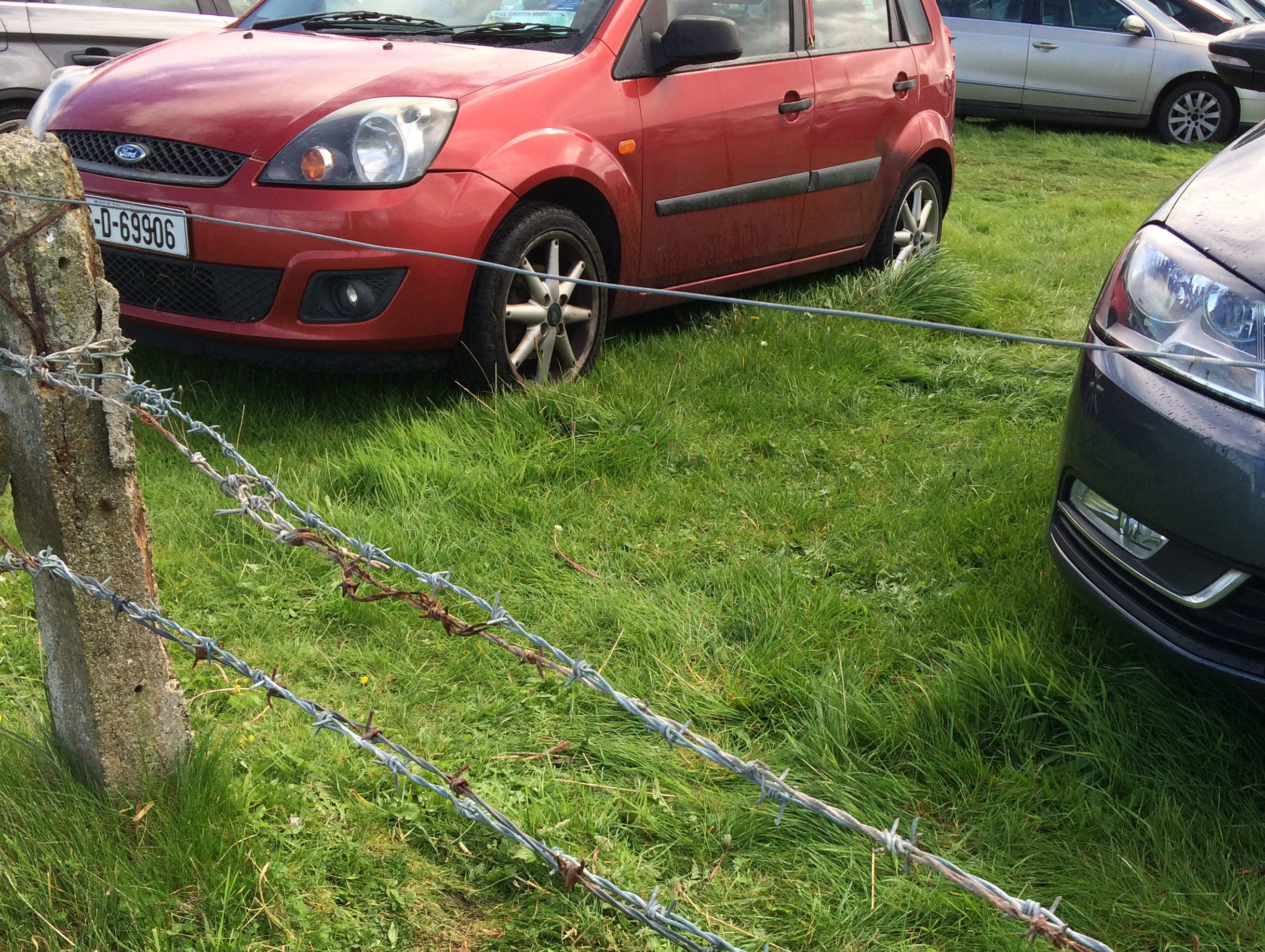 As usual, the centre of the race is the registration, transition and finishing line zone. One issue with this race is that this area is separated from the car parks by barbed wire fencing. Everyone struggles to get through this, stretching the wire higher or lower as they try to avoid snagging their Lycra. The organisers might consider taking down a short stretch of it, then putting it up again after the race: it would make life easier for athletes and supporters on the day.

My personal build up to the race wasn’t ideal: I’d been on holiday in Canada, coming back just two days earlier. So my training schedule had been disrupted by travel, and my jetlagged brain was still running four hours behind Irish time. But to be positive, I was feeling relaxed and well rested. The race started at 1pm, with registration open till midday: at least there was no need for a pre-dawn alarm call that morning. 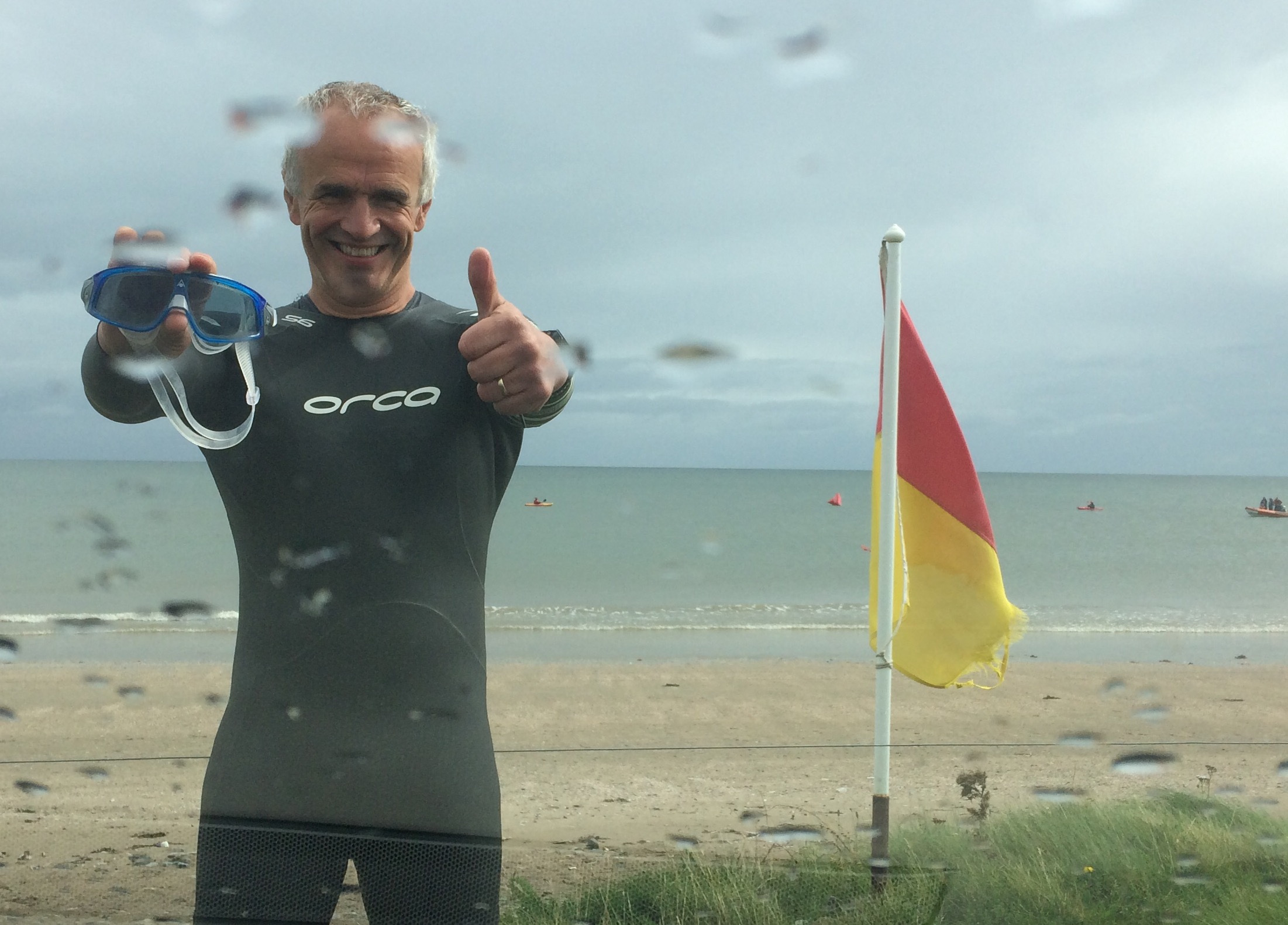 Drizzle: a change from the usual sunshine at Port Beach

The weather for my previous races here had been blue-skied sunshine, but today was different: a steady heavy drizzle greeted me when I drove up on Saturday morning. Weather conditions are important for more than just reasons of personal comfort in a race: if it’s raining, the roads are slippier, so I set my bike tyre pressures to be a little lower, and I took the corners at slower speeds. I also made the decision not to wear my sunglasses and Garmin Variavision: it would’ve been like driving a car without windscreen wipers. 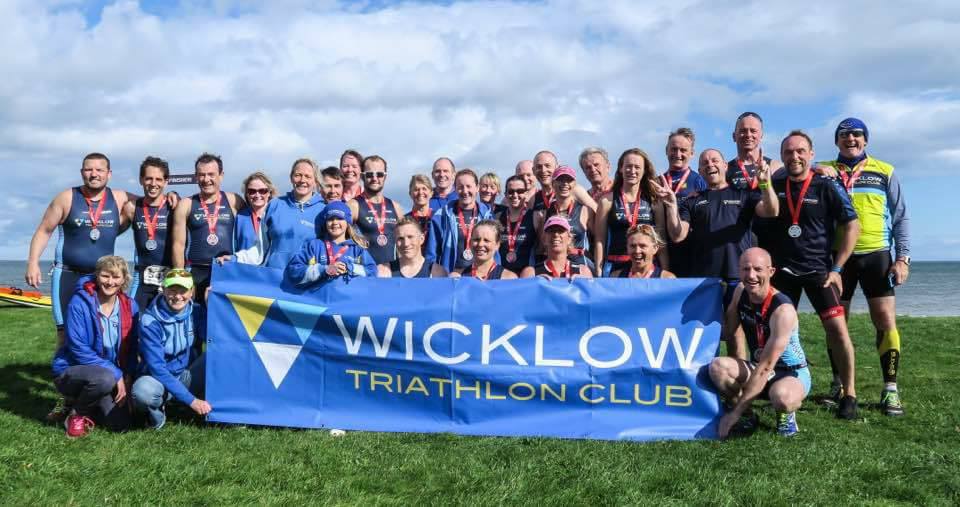 The social side to triathlons featured

One of the highlights of this race was the social aspect: over forty of my local Wicklow Triathlon Club members had entered, making us one of the biggest “teams” on the day. The longer standing members are good friends now, with plenty of banter and mutual support (and slagging). It was good to meet new members too: they’re starting out on their triathlon journey, and the veterans like myself enjoy giving them encouragement and getting to know them. Wicklow Triathlon Club has a strong community aspect to it: we had even planned a post-race barbecue together (sadly the poor weather put paid to that idea on this occasion).

Jelly fish added a twist to the swim

The Super Series athletes started twenty minutes before the age groupers: these are the top male and female triathletes in the country, setting off at a heady pace into the water. It’s helpful for the rest of us to watch them go: if there are strong sea currents affecting them, we can learn the lesson, adjusting our swim direction when we start our own races.

Then it was my turn: I lined up with a hundred others on the beach. This race has a classic beach start: on the starter’s shout, we all run down the beach together, into the surf, pacing through the water until it’s too deep, then swimming as hard as possible to try to find a good place in the pack. It’s congested and uncomfortable: you always get bashed in the head and on the body by people around you, but you know that after the first 100m, the crowd will thin out and you’ll find your own space.

The swim course meant heading out to a buoy, turning left, swimming parallel to the beach, around another two buoys, then back in to the end. It’s meant to be 750m, but my Garmin 735XT watch told me that I covered 800m, and I know others who swam up to 950m. How does this happen? It’s all about sighting: it’s difficult to see the buoys when you’re in a crowded bathtub of splashing water with swimmers all around you obscuring your view. It’s easy to swim in a zig zag fashion rather than a straight line: my extra 50m added an extra minute to my swim time. One of the key skills for doing well in the triathlon swim leg is to be able to swim in straight lines, going in the right direction.

There was an unexpected hazard in the water on the day: jelly fish. I didn’t notice them, but several fellow triathletes suffered stings on the exposed skin of their face and hands: some asked to be pulled from the water by boats as they didn’t want to carry on, and many had a red rash on their face afterwards. There’s not much that can be done about this: jelly fish are an occupational hazard of swimming in the sea at this time of year. 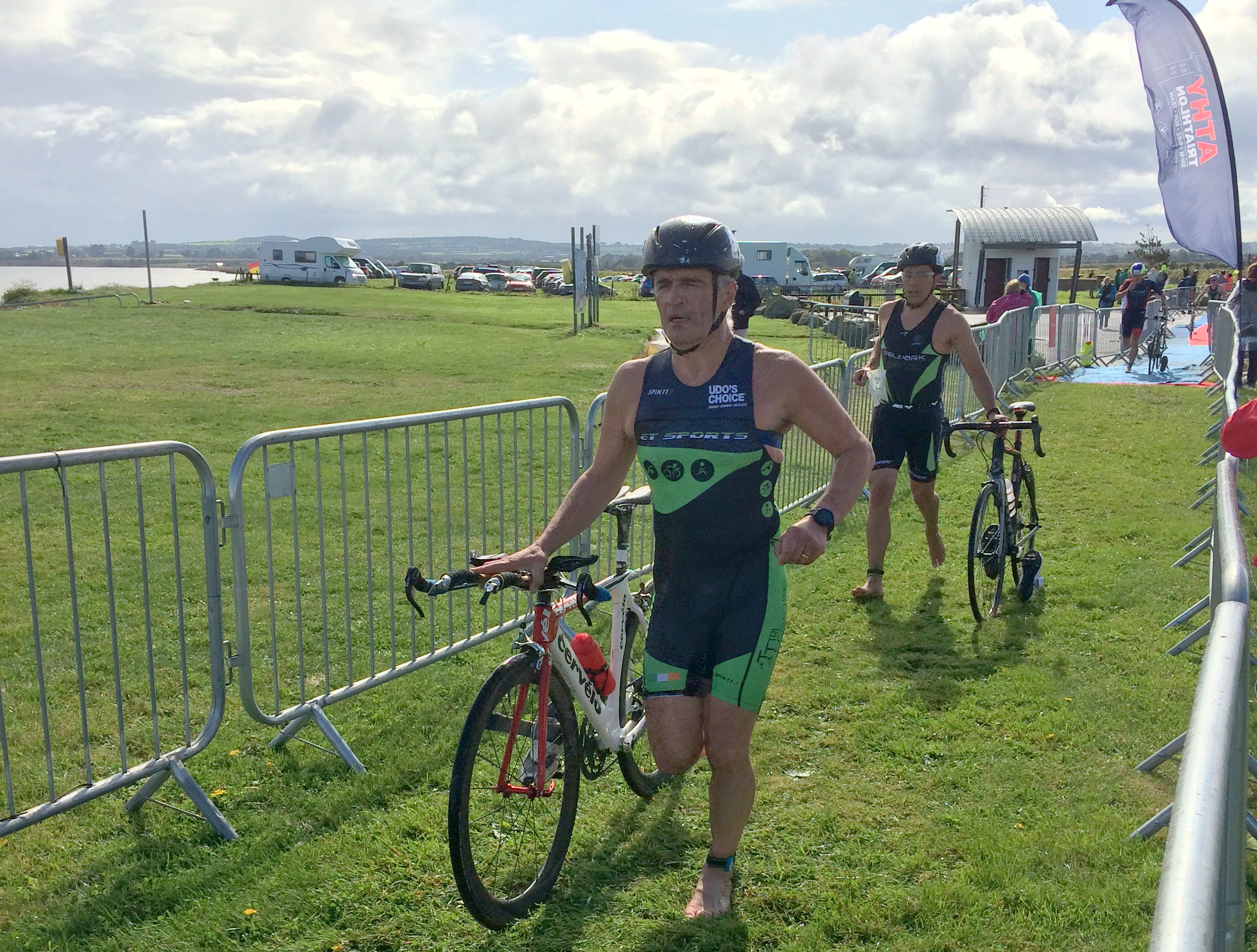 The bike section: not my fastest this season

As I emerged from the water, I struggled to undo the Velcro flap for my wetsuit at the back of my neck: in the end an onlooker reached out and did it for me, something which strictly should have meant immediate disqualification ( you aren’t allowed to accept any outside support). I’m grateful for the leeway that’s given to us social athletes on these occasions.

As I stripped off my wetsuit and put on my bike helmet, I noticed that I couldn’t find my race belt, which is the elasticated band holding your race number. Where was it? Had I pulled it off with my wetsuit? I raced on without it, but I later discovered that I’d left it in the car: my excuse was my jetlagged brain. My race number was also displayed on stickers on my helmet and on the bike, and all race entrants have chips on ankle straps too, so practically, it didn’t matter too much in any case. That said, a meaner race organiser might have disqualified me on this count too, so I was fortunate.

The bike course was a steady, undulating ride over 20km: no steep hills, but several sharp corners that had to be negotiated cautiously. My average speed was 30.5km/hr, down from 33km/hr as a result – making my bike time 3:30 longer. Doesn’t sound like much, but it would have made a big different to my final ranking in my race if I could have gone that bit faster. 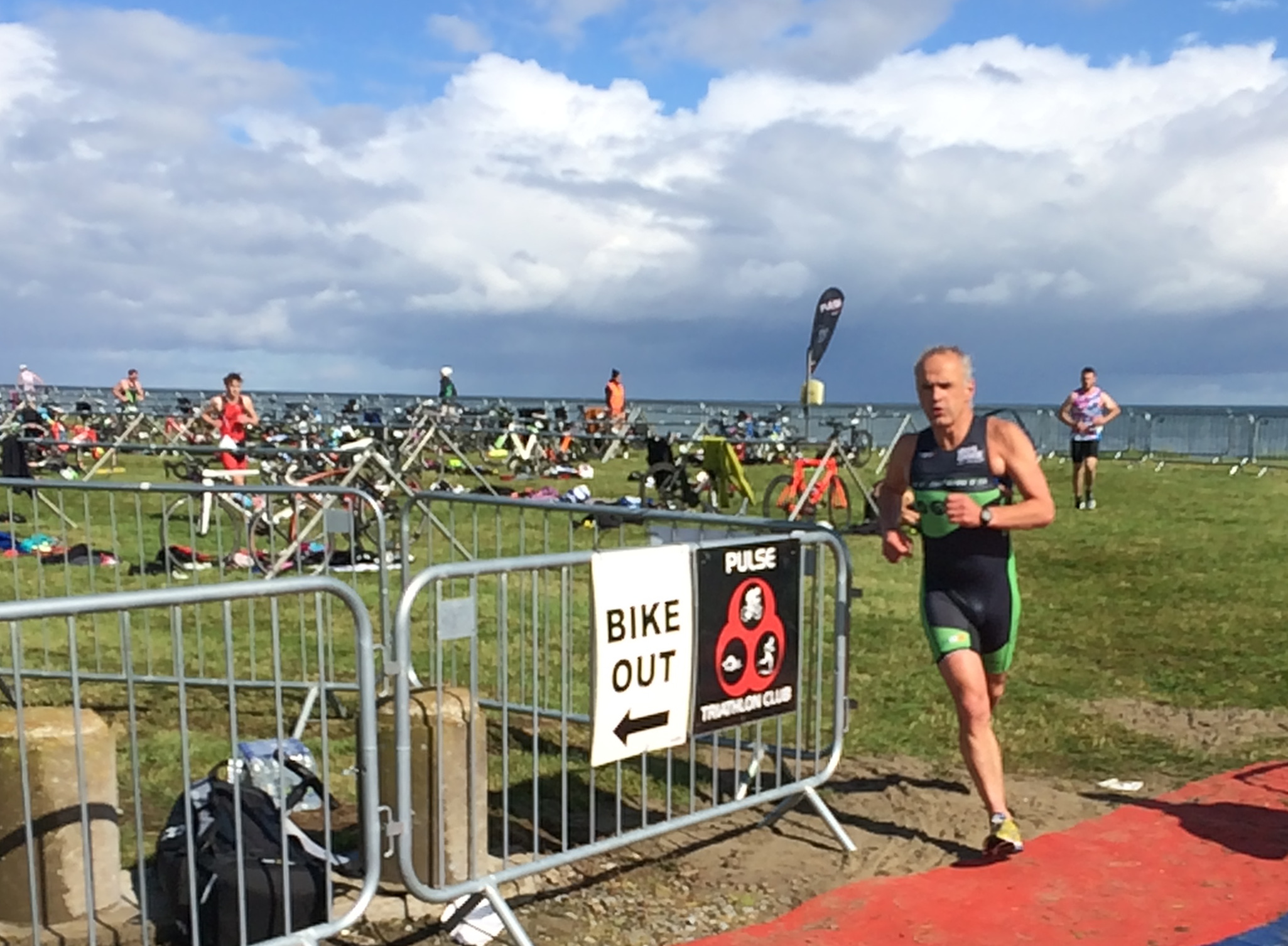 The run: up a slope then back down

The run is an out-and-back course- gently up on the 2.5km out, then a mild downwards slope back again. I ran it at a pace of 4:26/km, with an average heart rate of 161 beats per minute. That’s about as fast as I can go over 5k right now: I need to train harder to bring that time down. That’s one of my goals for next year. I used to run 4 minute kilometres, and I refuse to accept that it’s old age that’s slowing me down. Just need to train harder and better!

I find it helpful to have the Garmin-enabled analysis of these facts and figures: at the time, when you’re out there, you can only do your best, but afterwards when you look at what you actually did, it helps to understand where you are with your fitness and the effect of your training. 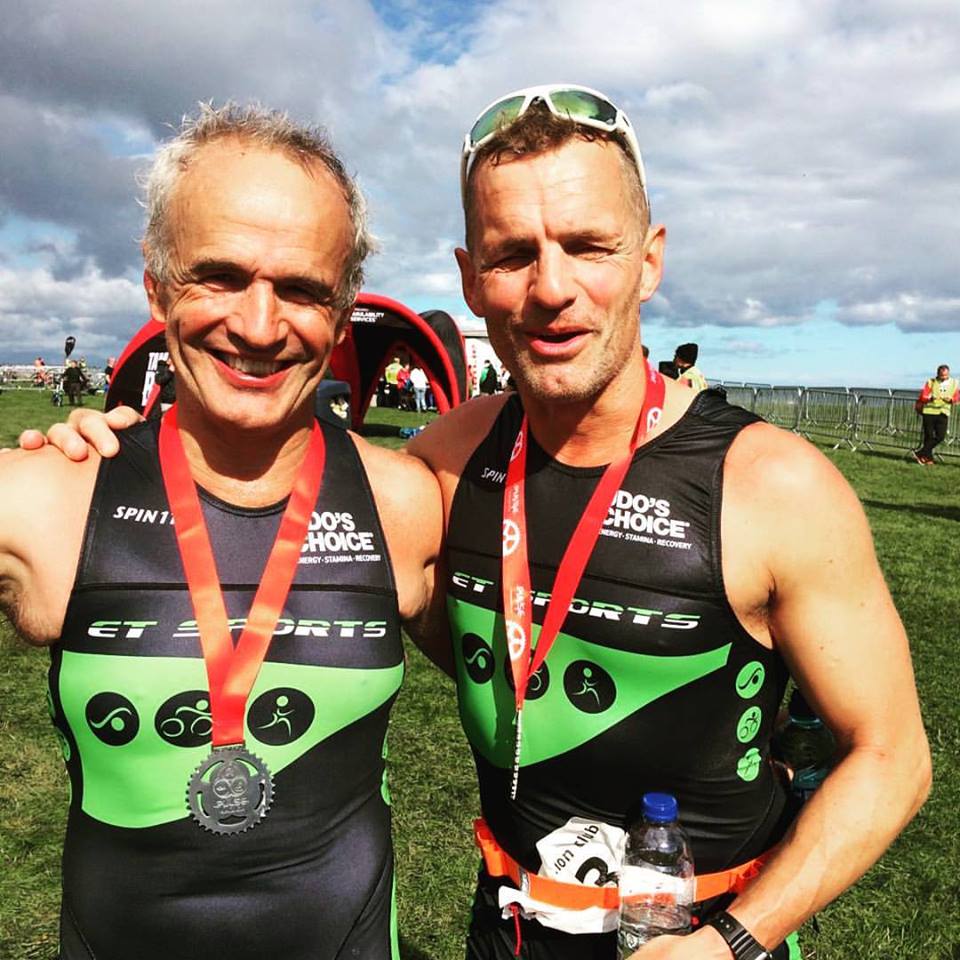 A friend and team mate, Simon Moore, passed me around 500m from the end, giving me huge encouragement to run faster for that final, gruelling stage of the race. His wave had started ten minutes after mine, so he finished ten minutes faster than me, winning his age group. An impressive athlete. As you can see from our tri-suit design, we share the same coach, Eamonn Tilley of ET Sports: we agreed that his advice and support is the key to our success.

A there-and-back run course means that you can see who’s ahead of you (they pass you on their way back as you are heading out). I didn’t notice many old fellas like myself going by, so I was hopeful that I might have scraped a podium place (top three) for my age group. As it was, I ended up being fourth: not bad, but could’ve done better.

A complimentary massage was available in the post-race area: my painful calf muscles were expertly pummelled by Jenny from DK Injury Clinic at  Base 2 Race, and strange as it may seem, they felt far more comfortable afterwards. Poor Jenny was under pressure: I had to wait in line for half an hour, and there was a long queue of athletes lining up behind me. At five minutes each, with over 400 triathletes, it would have taken her over 33 hours to do them all. Next year, it would be great if they could line up a few other masseurs to give her a hand.

And so to the next race; my final one of the season will be the Moby Dick Sprint Triathlon in Youghal, Co Cork on 30th Sept. Three weeks more of hard training, then I’m done for this year… 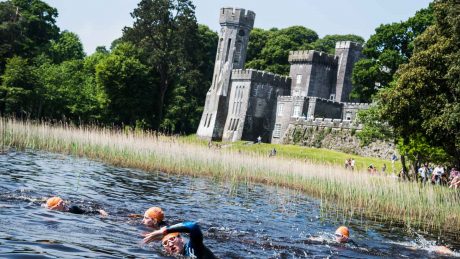 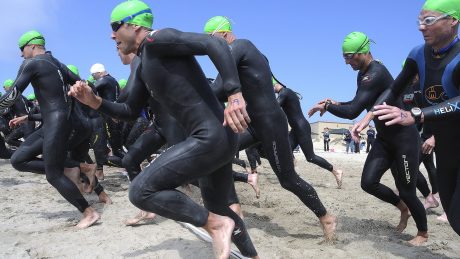