I did my first triathlon of the season recently, at Lough Cutra Castle, one of a very special series of triathlons that are run in the UK and Ireland: they are all based at a castle, giving each event a sense of the spectacular.

The event has an all-day programme, with races of a range of different lengths and duration (take your pick), including a busy young people’s triathlon race section, with three sections for children from 8 up to youths of 15 years. It was tremendous to see young people taking part with such enthusiasm.

An early start made easier by on-the-site camping

Anyway, my race, at half-iron distance, was the longest of the day, so we had to start early. I had travelled down from Dublin the previous evening, sleeping in a tent at the campsite that’s part of the Lough Cutra Castle set up. It was the perfect place for the race – I was woken by a dawn chorus of birdsong at 6am, in plenty of time for registering for the race at 6.45am. 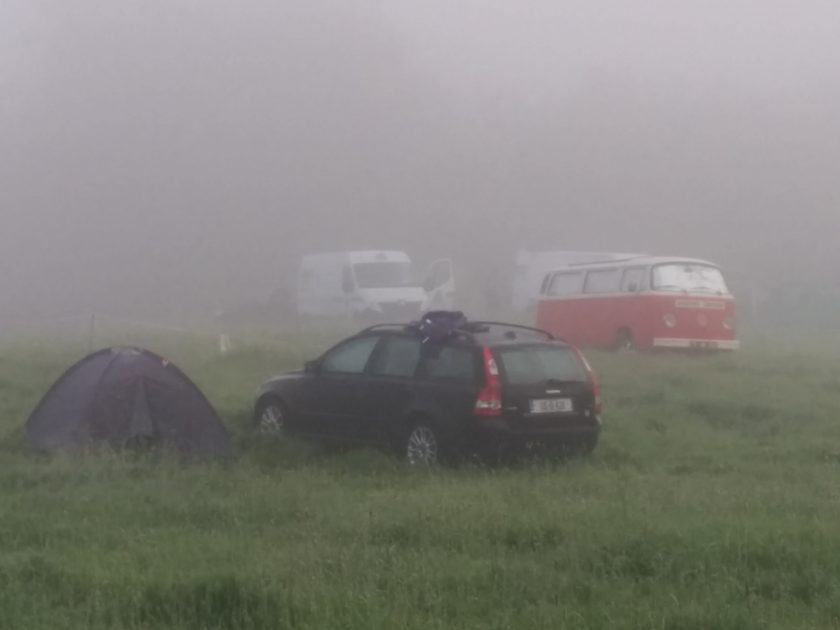 When I awoke, there was a haunting mist all around: I didn’t mind this at all – it’s often the sign of a clear, sunny day later on.

As it happened, the mist caused a serious complication. The race was meant to start at 8am, but the mist was so dense that the safety canoeists would not have been able to see the swimmers more than ten metres away.

No visibility meant no swimming in the race

The Triathlon Ireland organisation was there, with a particular focus on safety, and they made the right decision that it was too misty for the swim to go ahead. The race start was delayed, and delayed, and delayed. By 10am, it was still too misty, and the decision was made to make the Gauntlet triathlon a duathlon instead: instead of 1.9k swim, 95k cycle, 21k run, we were asked to do a 7k run, 95k cycle then 14k run. After the initial disappointment, it wasn’t so bad: nobody wanted to risk getting into trouble in the depths of the misty lake, and the 21k run was that bit easier split into two section.

So we lined up on the grass, and one-two-three, we were off, running along forest paths for 7km. This was my favourite part of the race – I was feeling hyped up and fresh, well slept and ready to race. I kept up with the pack around me, finishing this section at a 4 min 30 sec per km pace, which is fast for me. I then leapt onto the bike, and it was off into the mist of the Burren. In fact, by now the mist was clearing, and the predicted blue-skied sunny day was moving in. 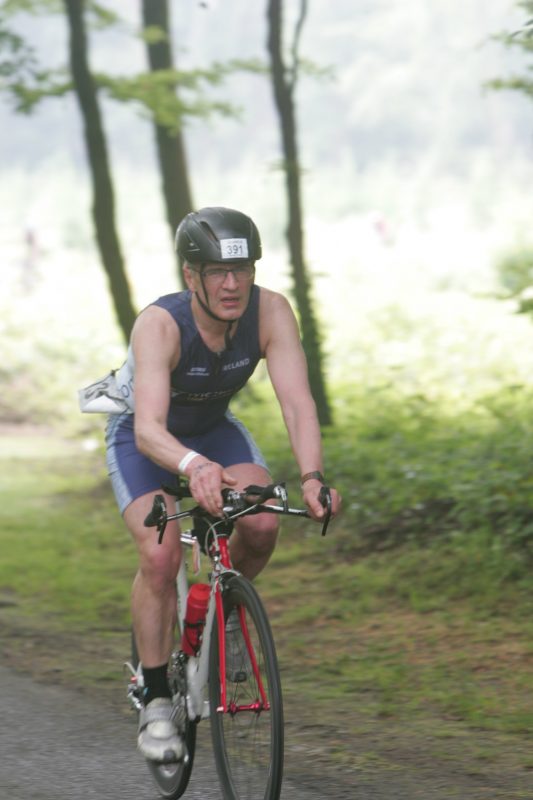 It was a tough enough cycle – 95km takes around three hours for someone like me – and there were plenty of hills to tackle. But the beauty of the Burren was enough to make it seem easy: mile after mile of classic west-of-Ireland vistas, with small green field divided by dry stone walls, areas of lime stone flat-rocked views, and sea scapes to remind you that you’re right at the edge of the Atlantic. I’d have loved to have a camera with me to capture some of this, but that’s one of the down sides of doing triathlons: no cameras or phones allowed. Or perhaps it’s an upside – you just have to enjoy the scenery, and I certainly did that. As I sped along on the bike, I had some real euphoric “high” moments, thinking to myself how lucky I was to be alive and racing.

then I was punctured – but not completely flattened

Typically, it was soon after one of those highs that I felt that tell-tale bump-bump-bump. I had a puncture in my back wheel. I’d been doing a great time – 31km/hour average – so to be stopped by a puncture with just 10km to go was disappointing. I had my repair kit on the back of the bike, but it took me 12 minutes to fix it. When you are in full race mode, it’s difficult to suddenly flip into “fixing puncture mode”. Your brain is all fuzzy, with the oxygen diverted to your muscles, and simple tasks seem much more difficult. By the time I had the puncture fixed and bike ready to ride again, I’d lost my momentum, and it was difficult to get going again.

So when I jumped off the bike, and started the final 14km of the race, I had lost some of my mojo. I was 12 minutes later than I should have been, and so I was way down in the rankings. It was now impossible for me to be in the top section of my age group, so it was difficult mentally to push myself as hard as I should have done. I ended up running the 14km at a slow pace of 5 mins 40 sec per km. Like many triathletes, I was also monitoring my heart rate, and it told an interesting story when I looked at the analysis afterwards. For the first (faster) 7km, my average heart rate had been 165 per minute, and I know from experience that this is what it should be when I am racing hard. For the second  part of the run (the 14km) my heart rate was only 155 per minute. It may not sound like much of a difference, but I know myself that it means that I didn’t perform as well as I could have done.

free food and free massage made for a rapid recovery

I was delighted to finish the race, of course – there’s always a great buzz to reach the end – and I indulged in the tasty food and free massages provided by the organisers: within a couple of hours, I was even planning my next race, which is unusually quick (it normally takes me a few days to consider more madness…)

The weather had turned into a scorching blue-skied sunny day, and there was a social buzz about the place. The setting – in the grounds of a two hundred year old castle – couldn’t be better, and there was a range of food stalls, children’s activities (like a climbing wall) and entertainment (a string quartet, amongst others).

If anyone out there wants to have a go at triathlons, put Lough Cutra Castle on your calendar for next year: it’s a good choice at many levels, from starting out, to sprint distance, to olympic, to half-iron distance. Or even if you just want to go along to see what this triathlon fuss is all about, you’ll enjoy the day out. 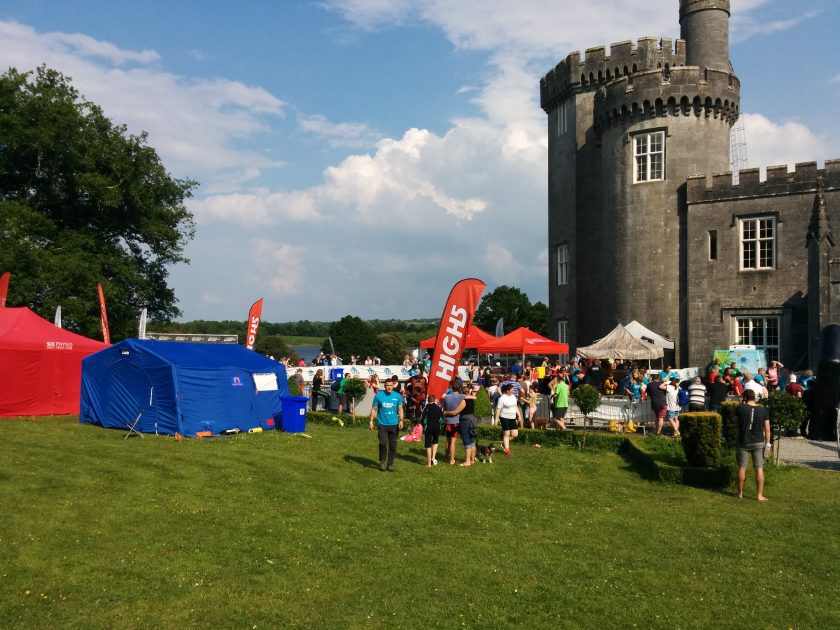 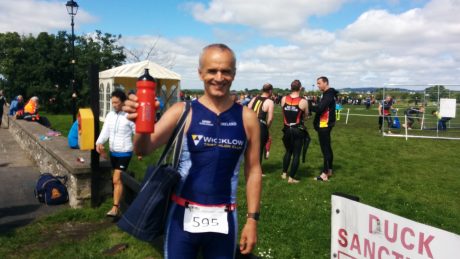 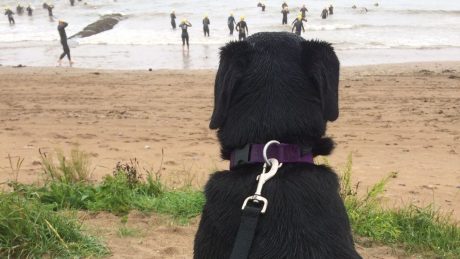