Much as I love training for triathlons, I’ve discovered that if I don’t have a race on the horizon, it’s just too easy for the training to lapse. I persuade myself that it isn’t really all that important to exercise according to my coach’s schedule, and I let it lapse for a few days. Before I know it, I haven’t exercised for a week, and the routine has been broken.

There’s a simple remedy to this laziness: always make sure that I have a race on the horizon. One of the great things about living in Ireland is that throughout the summer, there’s almost guaranteed to be a race on somewhere every weekend, within a couple of hours’ drive. And so it was that I signed up for the Tarmonator Sprint Triathlon, organised by Longford Triathlon Club.

The triathlon club organised a few other events attached to the Sprint: there was a schedule of children’s races the day before the main race, and there was a shorter Try-a-Tri race (with 200m swim instead of 750m) for those who wanted to have a shot at a triathlon but who felt unsure about committing to a long swim. This was the second year that the club had organised the event, and from its success, it seems that this is going to be an annual racing weekend that’s going to grow and grow.

An easy-to-reach location close the the centre of Ireland

The races took place at Tarmon Harbour, in Termonbarry village, on the banks of the River Shannon, 10km west of Longford Town, which is around 90 minutes drive from Dublin. The start time of 10am meant that athletes could easily travel here on the morning from all over Ireland – I met folk from Galway, Limerick and Belfast.

It’s a small race – with only 115 participants, and another 30 doing the Try-a-Tri event, but the amount of work to be done to organise the day is as much as if it was a bigger race. The Longford Triathlon Club team were up to the task, planning carefully so that everything went smoothly. Safety is always the key factor, and they had this well covered, from plenty of kayaks and other support personnel at the swim, to careful road management, working with local Gardai to allow us to use local roads for the bike and run. The roads were open to the public, with marshalls stopping traffic at key places like roundabouts to allow us all to race hard without worrying too much about other vehicles crossing our path. A Triathlon Ireland official was in attendance, adding a level of experienced monitoring to be double sure that safety was paramount.

The weather was perfect for racing: cloudy with flashes of blue sky, and no wind. I arrived 90 minutes before the start, so I just had time to register, set up my bike in the swim:bike transition, top up my nutrition with the protein bar that came in the goody bag, and change into my wetsuit for the start. 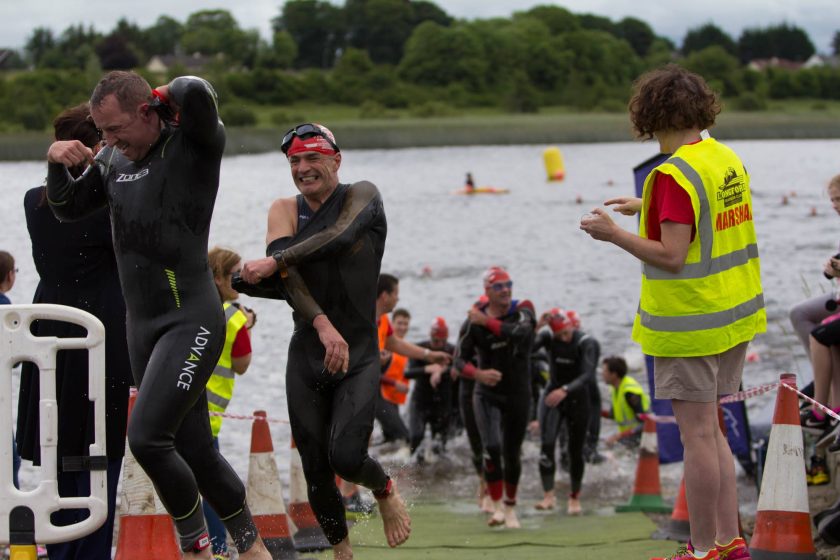 It was a lovely freshwater swim, and the water temperature was comfortable. We swam around three yellow buoys, following a triangular 750m course. There was a non-slip ramp to allow us to get out the water easily, with marshals on hand to give us a haul up as we staggered out of the water. There seemed to be marshals everywhere, right through the whole course, shouting encouragement and guiding us. This really makes a huge difference to the enjoyment of a race: full credit to Longford Triathlon Club for organising this so well. 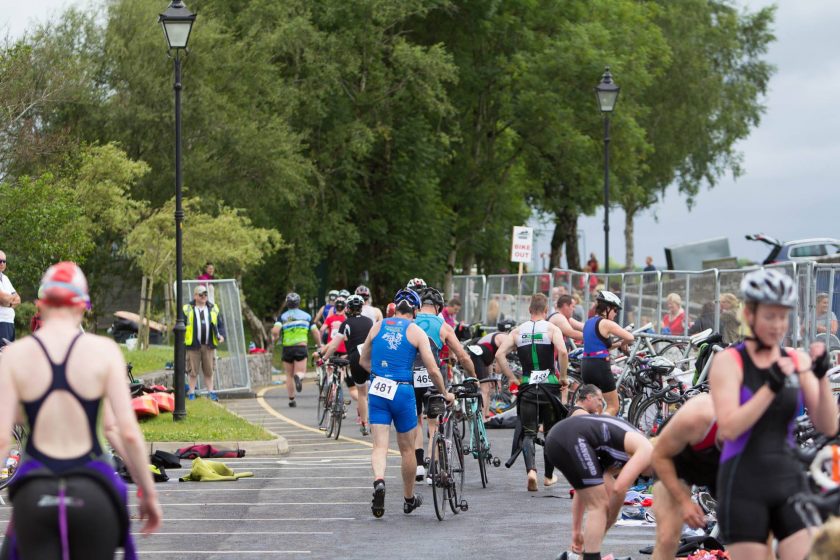 The swim-bike transition was based in the harbour car park, which was perfect: plenty of space for everyone, with a smooth tarmacked surface. When you’re in race mode, whipping off your wet suit and running up to the “mount” line pushing your bike, there isn’t much time to think, so it’s important to have an efficient flow of people, with no bottle necks. As you can see from the picture above, the Tarmonator set up was ideal: even at the peak of the race, there was enough room for everyone.

Cycling hard along a no-hills course

The bike course was simple: 10km out, then 10km back, on good quality roads, with no serious gradients. We were asked to use the hard shoulder, which was broad enough, to allow traffic to pass easily. I had a good bike ride- manged to keep my average heart rate at 161bpm and my average speed just over 35km/hr. To most people, these figures won’t mean much, but when you’re racing, you get used to monitoring your performance in this way. My Garmin watch gives me continual feedback about what I’m doing, and this helps to let me know when I need to push harder. When you’re tired, it’s easy to get lazy, and the stats remind you of this fact at the time, which then prompts you to refocus. 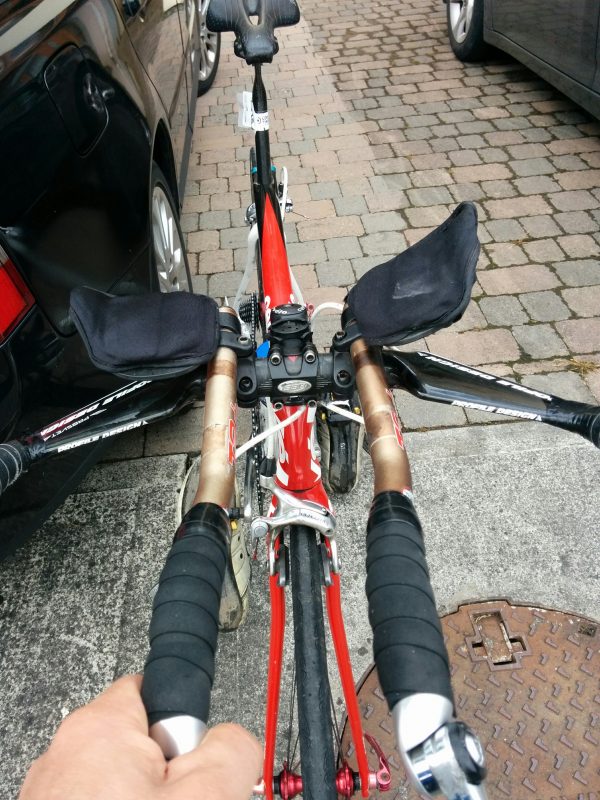 I had a serious technical issue on my bike – the left hand tri-bar  started to wobble around from side to side, so that I couldn’t rest my elbows on it in the normal “superman” type aerodynamic position. After the race, when I checked the reason for this, I found that a metal bracket had cracked. I was still able to cycle, but it slowed me down, and I’ll need to replace this before my next race. 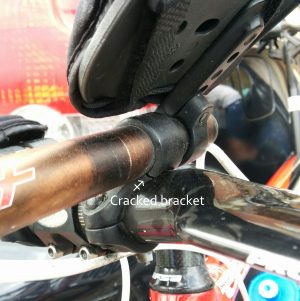 My bike-run transition was smooth enough and then it was the run, which was a road side run, along the main road for a kilometer, then up a side road, through a small village to the turning point, then back again. There were no dramatic hills: just gentle inclines.
It was a classic “country lane” type of run, and was thoroughly enjoyable. I kept a pace of 4:10 to 4:30 mins per kilometer, with average heart rate of 164 per minute, finishing in 22 mins, 11 seconds. I could (should) have gone a bit faster, averaging 4 mins per kilometer. Maybe next time. 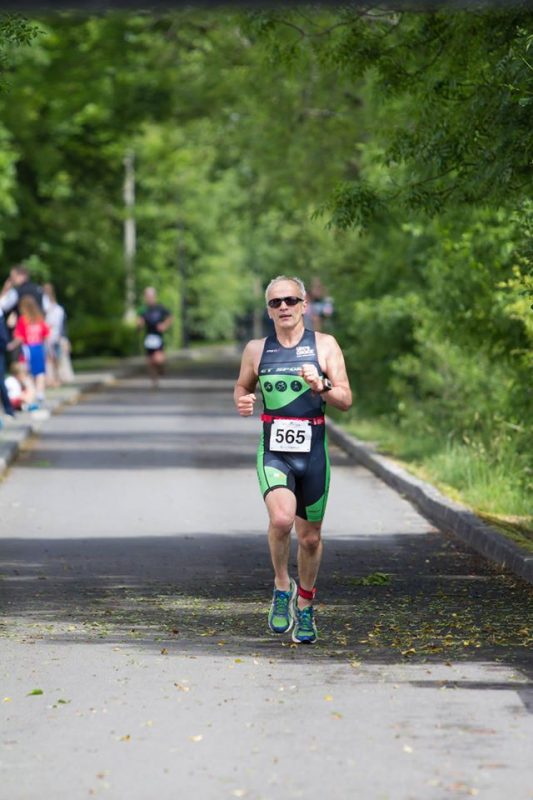 Once the race is over, it’s time to relax

After the race, the organisers had set up a marquee for us, with hot food, and it was a pleasantly social time. The sun was shining, we had all worked hard, and we were ready to relax. Triathletes are a cheerful bunch, and conversation is always easy: we have a common interest in triathlons, so there’s always plenty to talk about. 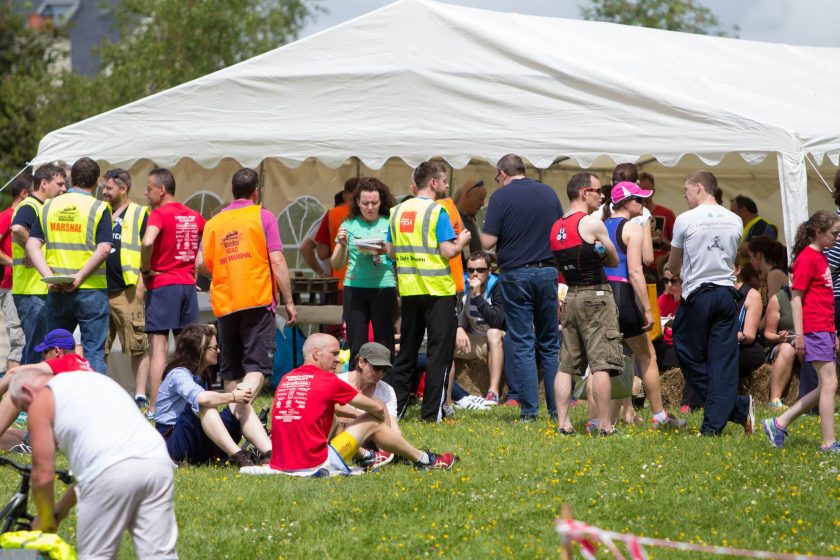 There was a small awards ceremony, for first, second and third of each gender, then the local club prizes too. I ended up being 19th out of 115, and second in the over-fifties, so I was happy enough with that. You can always do better in triathlons, and that’s partly what drives you to carry on training hard and racing to the best of your ability.

A well organised race: one for your diary in 2017

As you can see from the photo above, it takes a large team of volunteers to make a race run efficiently. They did a great job: the Tarmonator Sprint Triathlon has a well-earned spot on the triathlon race calendar as a well-run, safe, enjoyable event that’s worth marking in your diary for the summer of 2017. Whether you’re a newcomer to the sport looking for an ideal starter race, or you have experience and you’re looking for a straightforward sprint race to keep your engine ticking over, this is one to remember. 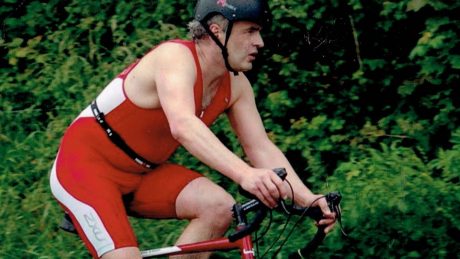 I’m representing Ireland as part of the national team at the World Triathlon Grand Finals in Switzerland: here’s why 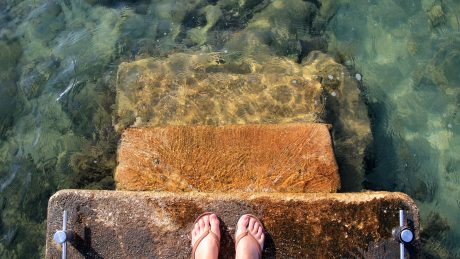 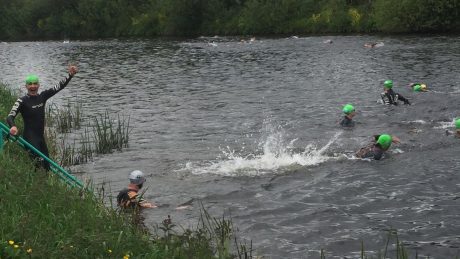