Elsie: A terrier with back pain 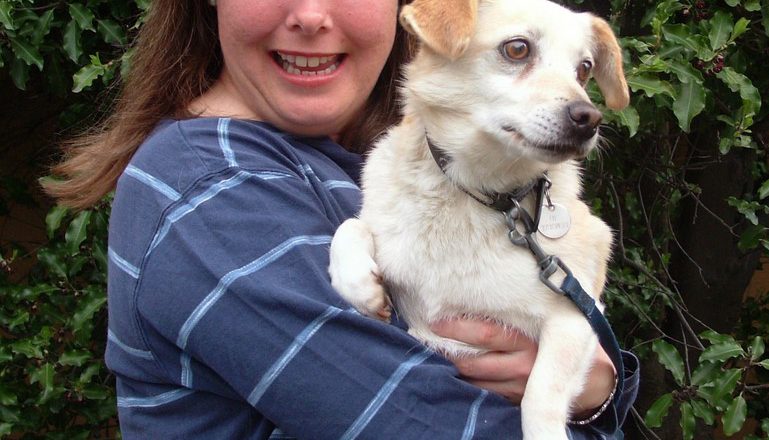 Elsie is a ten year old neutered female terrier who suddenly started trembling all over. She refused her food, and she looked miserable. Sheenagh knew something was seriously wrong, so she brought Elsie in to see me. It was obvious as soon as Elsie walked into the consulting room that there was something wrong with her. She was moving slowly, and trembling all over, from her head to the tip of her tail.

When an animal is brought to the vet, the problem is sometimes very obvious. Other times, like with Elsie, it can be more difficult to identify what is wrong. This is a classical example of the difficulty caused by the fact that animals cannot talk. I could not ask Elsie to tell me what she was feeling.

Vets need to use other methods than speech to try to work out what is happening with their patients. We need to look for clues by asking owners questions, and by carrying out a series of examinations and tests. The process can be similar in some ways to solving a crossword puzzle, or a mystery in a detective novel, and it can be very rewarding to finally discover the cause of a problem.

First of all, I asked Sheenagh for a very detailed account of exactly how Elsie was behaving at home. I discovered that Elsie had been completely normal the previous day, so the problem had a very sudden onset. This fact immediately ruled out certain slow-onset illnesses. Elsie had very few physical symptoms apart from the dullness and trembling. She not coughing, her breathing was normal, and there were no signs of a digestive upset.

I also found out that there were some specific aspects to Elsie’s behaviour that gave useful clues about the cause of her problem. She would not bend down to eat her food, but if she was fed morsels by hand, she would take them. And she was able to walk around the room slowly, but she completely refused to do normal activities like going up steps or jumping into the car.

Next, I carried out a careful physical examination of Elsie. This is a standard procedure that vets do every day with each patient, checking everything to make sure that there are no abnormalities. I started at her head, looking at her eyes, mouth and ears, and worked back along her entire body. I took her temperature, and listened carefully to her chest with my stethoscope. Elsie seemed generally very fit and healthy, although her heart was beating more rapidly than normal, and she continued to tremble like a wobbling jelly.

The final part of my examination was to feel carefully along her spine, starting with her neck, and moving backwards. This was where I finally found out what was bothering her. She did not mind at all as I examined her upper back, but when I moved down and gently prodded her lower back, she yelped in pain, and stared at me indignantly with her big brown eyes. I had found the site of her problem.

Elsie was showing all of the classical signs of lower back pain. Her behaviour (such as not going up steps) was typical of a sore back, and the physical examination had confirmed the location of her pain.
There are many causes of back pain in dogs, and I admitted Elsie to our hospital for further investigations. I took a series of x-ray pictures of her entire spine. These showed changes in her lower back that were consistent with a slipped disc, a problem that is as common in dogs as it is in humans.

Treatment of slipped discs in dogs usually involves a combination of pain relief and strict rest. In a minority of cases, spinal surgery may be needed.

It is difficult to force a dog to rest. As soon as Elsie was given pain relief, she would feel much better, and she would be as keen as ever to go for a long, energetic walk. Unfortunately, if she did this, her slipped disc would be likely to slip even further in the wrong direction, causing a severe aggravation of her pain, or even progressing to paralysis of her back legs. To prevent this, dogs with back pain need to be physically forced to rest.

Sheenagh bought a collapsible wire metal cage which became Elsie’s home for the next three weeks. She was only allowed out of the cage on a lead, for ten minutes twice a day.

Elsie stopped trembling within a few hours of being given pain relief. She brightened up and she started to eat normally. She soon grew used to living in her cage, and after two weeks of rest, she was allowed out to go for her first walk on a lead. Since then, she has gradually increased her activity, week by week. Elsie may have further episodes of back pain in the future, but for now, she has returned to living a normal, active life. 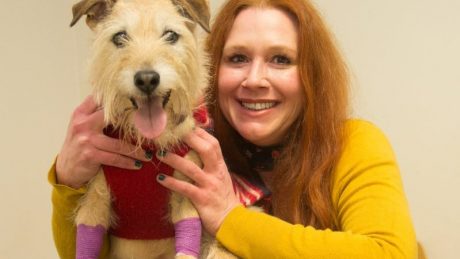 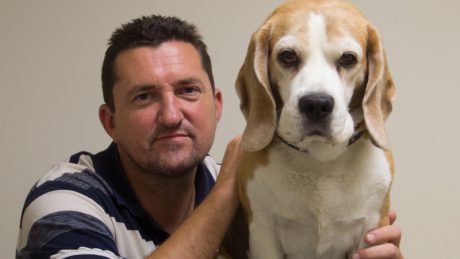 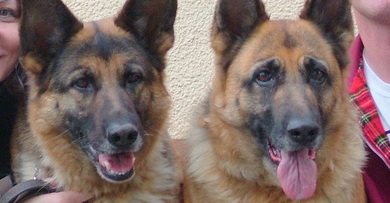