Paddy was given an instant “family” of pets by a classmate at school who was returning to Canada and could not take his animals with him. There were three guinea pigs and one rabbit, who all lived happily together. Strictly speaking, rabbits are not meant to be kept with guinea pigs because they don’t always get on, but all four animals seemed to be good friends, so Paddy decided to continue to keep them all together.  The creatures came with their own purpose-built two-storey hutch, which includes four separate bedrooms (one for each animal). It has a secure, fenced-in, steel run attached, so that animals are safe from predators while they graze on the lawn. The hutch is cleaned out every couple of weeks, and the run is moved on to a new area ever week, so the little animals never run out of fresh grazing.

WERE ALL THE GUINEA PIGS BOYS?

Paddy had been told that all four of his new pets were boys, and he had no reason to think otherwise: in the past three years, there had been no sign of any babies. The guinea pigs, especially, are playful creatures, often running and jumping together. Paddy had noticed that the two other ones often seemed to pick on Troubles, jumping on his back, but he presumed that this was just the way that guinea pigs played, and Troubles never seemed to mind.

This summer, the family went away for a couple of weeks on holiday, so Paddy’s grandparents were caring for his pets. When Paddy went to collect them after the holiday, he noticed was that Troubles had put on weight. He had always been a trim, lean guinea pig, but now he had a big pot belly. Paddy’s first thought was that perhaps Troubles had been given too much food while he’d been away, but the other guinea pigs seemed as slim as ever, so this did not really add up. Paddy’s father came out to the hutch to have a look, and he noticed that Troubles’ nipples were sticking out more than normal. It was only then that questions began to be asked: was Troubles really a boy, or could he possibly be female, and if he was female, could he be pregnant?

TROUBLES WAS BROUGHT TO THE VET

Paddy brought Troubles up to see me, and a quick check confirmed that “he” was in fact a “she”.  When I squeezed her abdomen, I could feel a couple of hard objects, the size of marbles. To be double-sure, I took an x-ray picture, and this removed any doubt. The tiny skeletons of two baby guinea pigs could be seen in Troubles’ abdomen. She was definitely pregnant, due to have her babies in the next week.  Paddy quickly set up special maternity arrangements: Troubles is being moved to her own cage and run, so she can rear her young safely away from the others.

Paddy isn’t yet sure what he’ll do with the baby guinea pigs, but he’s hoping a friend will take them. He’s also not sure what to do with Troubles: one batch of accidental babies is more than enough. He’s probably going to find another female guinea pig to keep with her, in a separate guinea pig house and run.
In the meantime, he’s taking no chances with getting the sex of his pets wrong again. I’ve double checked that his other guinea pigs are both male, and in due course, I’ll be checking Troubles’ babies. One batch of unexpected babies is more than enough. 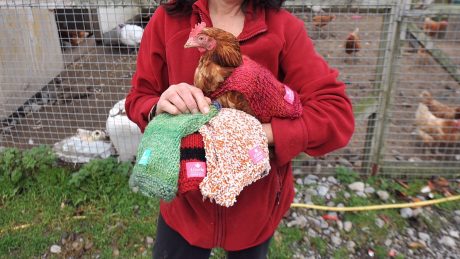 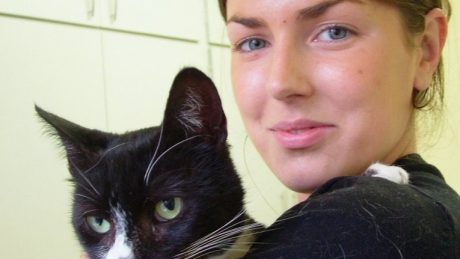