All-round parasite protection for pets and family: what do owners need to know?

Pet parasites: what are the facts?

#SP. Most of us love our pets, and we like to hug them, but there’s one aspect of the animals in our lives that can make us uneasy: the parasites that they can carry, inside and out.

A recent survey of over 1000 dog owners in the UK carried out by Pet Parasite Action has found that while most people (85%) are happy to hug their dogs, nearly a third have found pet parasites on themselves or their children. This in itself is enough to make most people feel uneasy, but perhaps the biggest problem is the uncertainty that accompanies fear of parasites: most people don’t know which parasites are the most dangerous for our pets’ health or for human health.

The survey found that most owners allow their pets to get very close during daily activities: they let them sleep on the bed, as well as sit on the sofa or on their lap. Most even allow their pets to lick their faces and give them “kisses”. A few owners go even further, allowing their pets to lick the family’s plates and sit up at the dinner table. This type of close contact can be part of the pleasure of sharing your life with your pets, but what about the potential health risk from parasites that your pet might be hosting? Over a third of people say they never think about this aspect.

The survey went on to investigate people’s knowledge about some of the more common parasites, and the results are worth reviewing, along with the “correct answers” about the potential risks.

Lungworm probably qualifies as “the parasite of the moment”, representing a growing threat. Dogs pick the parasite up by eating slugs and snails, and they probably do this without their owners noticing, by common behaviours like chewing grass. The incidence of lungworm is growing, probably due to climate change, and new cases are now being seen in previously unaffected areas. Most vets now discuss lungworm prevention with owners during routine health checks.

Over a third of survey respondents (36%) said they were worried about ticks, but only 48% realised that ticks can cause fatalities in dogs because of the diseases they can transmit, even though this is a rare occurence. Also only 28% of owners knew that ticks (as a transmitter of Lyme disease in people) are a real threat to human health.

As with lungworm, changing weather patterns, along with growing populations of deer in some areas, have resulted in a growing tick population in the United Kingdom. And again, vets now tend to discuss tick control as a routine health control measure with owners.

Despite the fact that roundworms have been discussed in the media and by vets for many years, only 15% of owners stated that they were worried about them, with just 7% correctly saying that they thought roundworms could threaten human health. The truth is that eggs from the roundworm Toxocara pose a significant threat to human health, potentially causing blindness or neurological disease, especially in children. This parasite is the main reason why vets, for many years, have stressed the importance of regular deworming of pet dogs and cats.

The survey found that one in four owners didn’t realise that their pet could have parasites which might not be visible. The truth is that this is the norm, rather than the exception, for all three parasites under discussion: lungworms, ticks and roundworms.

Around 1 in 6 owners in the survey said that it had been around a year since they had last treated their pet for ticks, lungworm or roundworm. Despite the fact that 74% of owners had stated that they were concerned about lungworm. 23% said that didn’t know when their pet had last been treated for this parasite.

The survey also showed significant confusion about how some pet parasite treatments work. After the application of spot-on products, 61 per cent avoided bathing their dog or letting them swim, 41 per cent prevented human contact with their pet, and 33% stopped their dog from lying on the sofa or bed. There seemed to be little awareness of the fact that recent formulations of effective anti-parasite drugs mean that there are now palatable oral chews available, which mean that owners can continue interacting with their pets as normal after treatment.

Owners shouldn’t be afraid of pet parasites: they should know the facts, and know what they can do to help prevent problems. It really is as simple as that. 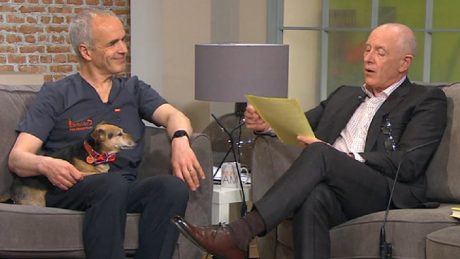 Holiday care options for pets: Pete the Vet on Ireland AM | The Telegraph, TV3