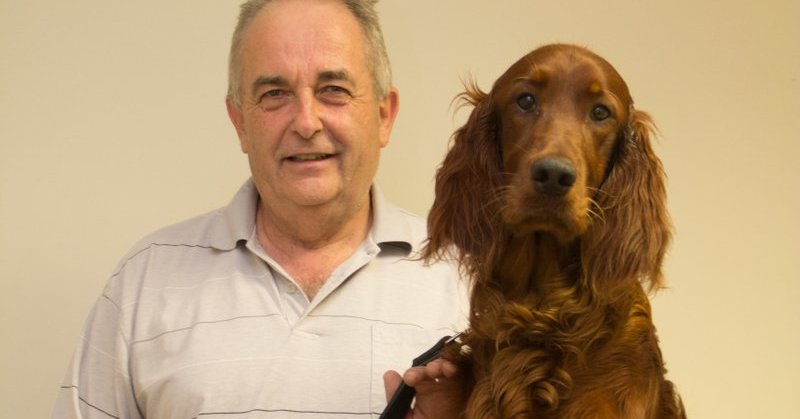 Colm brought Beoga in to see me recently: he had itchy ears that needed a short course of treatment. While I was examining his dog, Colm described some of the trials and adventures that he’s been having with his adolescent pet.
Beoga was named by his breeder: the word, which means “lively spirited” in Irish, seemed appropriate from when he was a young puppy. There were nine pups in the litter, and Beoga was the most lively and energetic of them all, with an endearing, mischievous nature.
Colm took him on when he was three months old, and the last seven months have been eventful. Beoga is a very gentle, good-natured dog, and he’s been easy to train. He sits, stays, walks on the leash and comes when called. The only problem is that he is a bundle of youthful energy. However much he is exercised, he still has extra energy to burn, and this can cause excitement and mischief in his day to day life at home.

beoga is an escape artist

Colm’s back garden is surrounded by five-foot-high walls which have always been easily been high enough to keep any dogs contained. However even before he’s fully grown, Beoga has shown that the walls aren’t high enough: he has jumped, clambered and climbed his way out of the garden on a few occasions. Colm has had to add two feet to the height of his boundary wall, just to keep this energetic animal contained.
Beoga doesn’t just use his energy to try to get out: he also tries to get inside. When Colm went out recently, he left Beoga in the back garden. When he came home, the dog had leapt up onto the window sill of the conservatory, and he had his head poking through one of the fly windows. If Colm hadn’t come back, he reckons Beoga would have launched himself up and forwards in an attempt to squeeze in through the tiny opening.
Last week, Beoga found another way to entertain himself. Colm heard a loud rustling noise in the garden. When he went out, he found Beoga in the upper branches of a plum tree. He’d clambered up the trunk, and was heading off along one of the branches in an effort to reach the plums.
He loves eating fruit of all kinds, and Colm has learned that apples and bananas in the home can no longer be left in a fruit bowl on the table: they need to be locked away behind closed cupboard doors, or Beoga will start some sort of assault on the barriers between himself and the fruit so that he can get to them. Colm’s family have a new expression to describe how a room or the garden must be left before they go out: it has to be “Beoga-proof”.

It isn’t just freedom and food that motivates him: recently, Bobby, a Jack Russell terrier in the house, was sleeping peacefully in his bed, with a cushion under his head. He then ran around the room, shaking the pillow, as if to say “it’s mine now!” He also has a fascination with water, wrecking water features in the garden by jumping in and floundering around. And when he’s on the beach, he charges into the sea, hurling himself into the waves with joy.
Beoga’s energy can be fun to cope with but he’s wearing Colm out. Over the next six months, he’ll mature into a young adult dog. Colm is hoping that as this happens, some of the over-energetic and hyper-enthusiastic activities will gradually settle down.
Colm doesn’t want him to change too much: he’d prefer that this unique dog will keep his fun attitude and spirit of adventure so that they go on to have a long and happy life together. 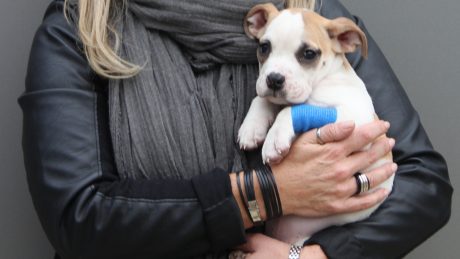