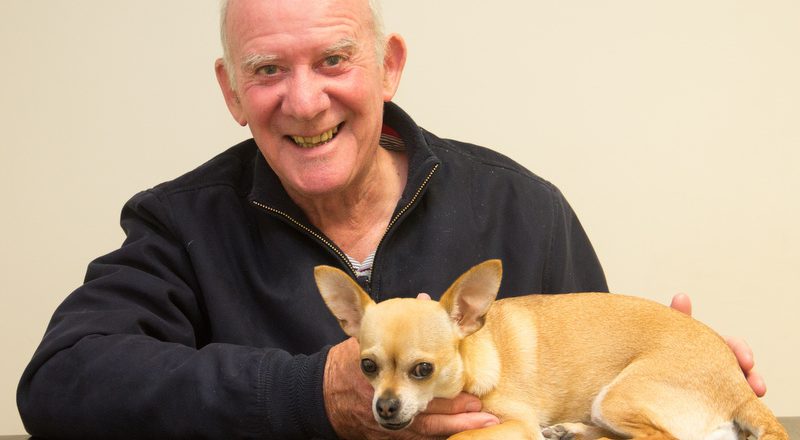 Brocious technically belongs to Brian’s son: she was a present to him from some friends for his twenty first birthday. He was charmed at first, but the reality soon kicked in: he was still at college, and he wasn’t in a position to be able to offer the full time care that owning a dog involves. Brian and his wife stepped in to help out, and before they knew it, they had become her de facto owners. As it happens, they were very happy to do this, and they’re very fond of the little dog. Brocious still loves seeing their son when he comes home, but Brian and his wife are definitely her day to day real life human connections.
She has been a happy healthy dog, but she’s a dog who would be described, technically, as “reactive”. This means that she reacts strongly to everything around her. She has very sensitive hearing and if a car drives past the house, she hears it, and gets madly excited, running around barking. If the postman pushes an envelope through the front door, she gets dementedly worked up with excitement. And if there’s a visitor to the house, she will bark furiously at them when they arrive, only calming down when she sees that they are being welcomed by Brian and his wife. She’s a great watch dog, although her tiny size means she could never really be classified as a “guard dog”.
She’s also very fearful when out on walks: if she sees another dog, she freezes, totally terrified, and does her best to go in the opposite direction to the dog. This habit makes it very difficult to take her for the type of regular walks that most dogs enjoy: it’s such an effort to go for a decent walk without meeting another dog and having a difficulty like this.
As a result, Brocious tends to get most of her exercise in the families large garden: Brian takes her out there for a run around, and she enjoys the solitude. She loves being out and about outside, but she just prefers to be on her own with her two owners, away from all other animals and people.
This type of fearful reactive behaviour is a common problem, with two main causes.
First, puppies that grow up in puppy-farm type environments are often reared in concrete pens, with no exposure to the normal sights, sounds and smells of daily life. As a result, they grow up being afraid of everything around them. Studies have shown that puppy-farmed dogs are far more likely to have serious fear and anxiety based behavioural problems. Nobody knows where Brocious was bred, but as a small, pedigree breed of dog, she may well have come from a puppy farm. Most people do not realise when they are buying a puppy-farmed dog. The truth is that if you don’t visit the family home, and meet the mother of the puppy you are buying, there’s a high chance that the pup originates from a puppy farm. If you meet the seller of a puppy in a car park, “because it is more convenient”, it’s very likely that the pup actually comes from a puppy farm.
The second cause of this type of behaviour is a traumatic incident in young adulthood: Brocious was once attacked by a large German Shepherd, who picked her up and shook her. This will have left her with a deep, long lasting terror of big dogs.
The family don’t mind the fact that they can’t take her for walks, but there is one problem: she doesn’t do any walking on hard surfaces like tarmac or concrete, so her nails don’t get worn down in the normal way. This means that every six months or so, her nails have grown so long that they start to curl around. She needs to have them trimmed so that they don’t dig in to the pads of her feet.

Nail clipping is normally a simple procedure that takes a couple of minutes. The owner gently restrains the dog while the vet picks up each foot in turn, using nail clippers to shorten each claw to the correct length. It’s different with Brocious. As her vet, I see her nervous reactive nature first hand when she’s brought to me to have her nails trimmed. She wriggles, growls, and snaps. She gets so upset that it’s impossible to do the job safely: either someone would get bitten or she’d hurt herself in the struggle to escape.
We’ve discovered that there’s only one way to get the job done smoothly: sedation. We now have a regular routine that works every time.
Brocious is a tiny dog, so it doesn’t take much medication to send her to sleep. As soon as she arrives in our waiting room, I go out to see her, and give her 0.1ml of sedative ( that’s just one fiftieth of a teaspoonful). She doesn’t mind me giving this injection: Brian keeps talking to her, and I sneak up behind her, using a very fine needle to inject her on her rump. Fifteen minutes later, she’s sleeping soundly, as if it’s the middle of the night.
I’m then able to pick up each foot in turn, clipping the nails quickly and easily. She sometimes stirs in her sleep, but she never wakes up enough to be upset in anyway.
As soon as I’ve finished, I give her the antidote injection, and within fifteen minutes, she’s as awake and alert as she was when she arrived at the clinic.
The system works well, and the stress of her nail clipping visits to the vet has vanished completely -for Brocious, for Brian, and for her vet. 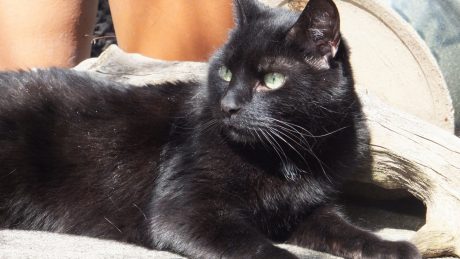 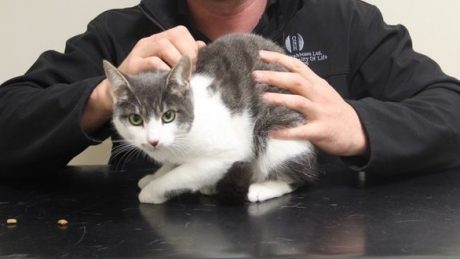 Sissi was shot by someone with a high powered rifle 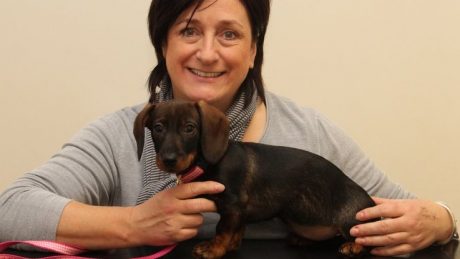