Cinders is an eleven month old female neutered black Domestic Shorthaired Cat. Her owner Orla was in the bathroom, when Cinders jumped up beside her and passed urine in the sink. Orla was shocked when she saw that urine was a dark red colour, and it contained small clots of blood.

A Bloody urine is always a very significant sign that should never be ignored. Pets with this problem need to be taken to the vet immediately to establish the source of the blood. There are many possible causes. Often a series of tests needs to be carried out to make the most accurate diagnosis, and to determine the most appropriate treatment.

When I examined Cinders, she seemed like a very healthy, contented young cat. She purred as I examined her, pressing her head against my hand in an affectionate way. Orla told me that apart from the urine incident, she was behaving completely normally at home. She was eating well, and had a normal thirst. Her temperature was normal, and she allowed me to feel her abdomen very thoroughly, so I could tell at once that there was nothing painful inside her, and there were no unusual swellings or growths.

The most likely cause of Cinder’s problem was a condition known as “cystitis”, which means “inflammation of the bladder”. For different reasons, the inner lining of the bladder becomes bright red and sore looking, almost like a knee which has been grazed by a fall on tarmac. Blood oozes from the inflamed bladder wall into the urine. Many cats with cystitis also have increased urgency, and owners sometimes find small drops of bloody urine around the house, where the cat has been “caught short”. Cinders was a very smart cat – the bathroom sink was the perfect place to pass urine in a hurry. And doing it in full view of Orla was a good way of telling her owner “Look – something is wrong with me!”

Cystitis can be caused by a number of different underlying causes, and the treatment of each can be different, and so it was important to do some tests to find out more about what was going on. I admitted Cinders to our animal hospital for the day for a full work-up.

Cinders was sedated with a modern drug that caused her to become very sleepy while I did my tests, but that was immediately reversed with an antidote as soon as I had finished.The first task was to take a radiograph (X-ray) of her abdomen. Some cats develop crystals in the urine, and these can gather into small stones in the bladder. If these are present, they can be seen on the radiograph, and sometimes surgery may be needed to remove them. In Cinders’ case, there was no sign of any stones, and the rest of her abdominal contents also looked completely normal.

Next, I needed to collect a urine sample for analysis. Cats are very private about their toileting habits, and it is difficult to get a “free catch” sample. Instead, I used a simple, safe technique called “cystocentesis” when Cinders was sedated. I could feel her bladder with one hand, and with the other, I pushed a needle connected to a syringe through her abdominal wall and directly into her bladder. As I pulled back on the plunger, the syringe filled with dark red, cloudy-looking urine.

I analysed the urine in our in-house laboratory. It contained lots of blood, but there were no crystals present, and it was a healthy urine sample in all other ways.

My final job was to collect a blood sample, also for analysis in our practice laboratory. A mini-panel was carried out, and this confirmed that Cinders’ kidneys were working correctly.The work-up confirmed that Cinders had straightforward cystitis, which is a common condition in the cat world. Sometimes it can be caused by a bacterial infection, but more commonly, it happens with no identifiable underlying cause. It can be associated with stress, and it is more common in cats that eat only dried food, but it does also happen in unstressed cats, and in cats that do not eat dried food.

I sent Cinders home with three forms of treatment. Firstly, she was given sachets of a special food that is designed to make the urine less acidic, and less irritant to the lining of the bladder. Secondly, she was given a course of antibiotics to treat any bacteria in her bladder that could be contributing to the problem. And thirdly, she was given some simple pain relief in the form of drops to be added to her food, to minimise any discomfort that she might be suffering.

I texted Orla three days later to check up on Cinders’ progress, and she had returned completely to normal. It is likely that she may suffer from repeated episodes of cystitis in the future. Now that the initial work up has ruled out serious underlying causes, in future I will be able to simply dispense the same treatment as needed. 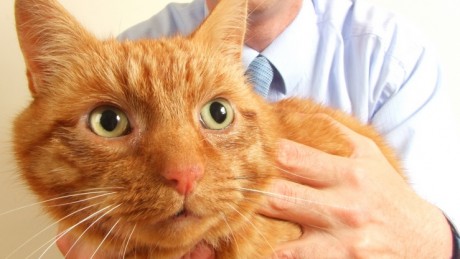 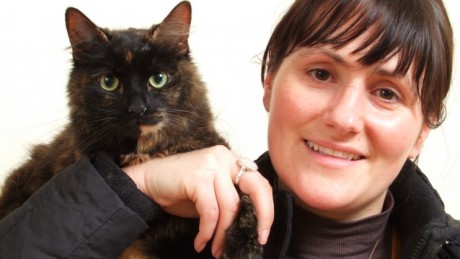