Lily and her sisters Poppy and Zinia found their three pets as young adult rabbits at the DSPCA animal shelter, just over a year ago. They are sisters from the same litter, and they get on well together. The girls liked the idea that three human sisters have three rabbit sisters as pets.

The rabbits live a free range lifestyle in Lily’s back garden. They do have a large hutch, but they are never shut up inside it: they are free to come and go as they please. They spend their lives hopping around the lawn, scurrying under the garden shed and digging tunnels beneath the patio decking. The garden is securely walled in, so there are no visiting animals, and they are safe to do as they please.

The rabbits enjoy human company, being picked up and cuddled from time to time, and they often graze on the lawn right outside the family’s dining area, as if they enjoy being in sight of Lily and her siblings.

mopsy had a problem

Around three weeks ago, Lily noticed that there was a problem: Mopsy was holding one ear up, and one ear down, instead of the usual “two ears up”. There was a small scratch on the drooping ear, and Lily thought that perhaps  the rabbits had been fighting. As part of their normal social behaviour, they sometimes play in a boisterous way which can be quite aggressive. Sometimes one of them ends up with minor scrapes that have always healed by themselves.

On this occasion, the ear did not get better in the normal way, so Lily caught Mopsy to have a closer look. There was an accumulation of thick discharge on the inside of the drooping ear, and it looked red and sore. Lily decided to bring her in to see me.

I examined Mopsy’s ear carefully using an otoscope, an instrument like a torch with a cone-shaped fitting to look inside her ear. I found a solid accumulation of thick wax, and the ear was sore, so I admitted her to our hospital for a thorough ear cleaning session. I gave her a deep sedative, then I was able to flush her ear with a powerful wax dissolver. I also took a sample from her ear to examine under the microscope, and that’s when I found what I was looking for: ear mites.

Under the microscope, I could see a magnified version of the wax and debris from inside her ear. In the middle of it all, I could see tiny mites wriggling their legs. There were dozens of them: it was no wonder that Mopsy’s ear had reacted so dramatically.

Ear mites are common in rabbits: they are tiny, wriggly, spider-like creatures that feed on ear wax. Mopsy and her sisters have never mixed with other rabbits, so it’s most likely that the mites had been in some of the hay that had been bought for them in a pet shop.

A detailed treatment schedule was needed, not just for Mopsy, but for her two sisters as well. Even though the other rabbits seem to have healthy ears, there’s a high chance that they too could be carrying the mites. As well as ear ointment, they were each given a course of injections, once every ten days on three occasions.

The sore ear began to improve immediately, and within a couple of days, both of Mopsy’s ears were up again, in the traditional two-ear v-shaped position. 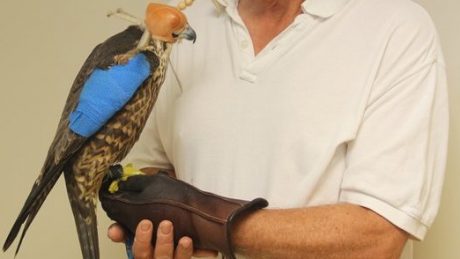 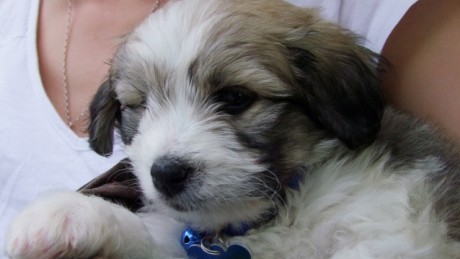