Fluffy and Murphy came into the Yarrow household when they were young kittens. The family live in an urban area, and it was obvious that it would be hazardous for the cats to be allowed outside. The garden is too small to contain curious cats and there are busy roads all around. The sensible decision was made to keep the cats as indoor-only pets. It became one of the “house rules” that before any door or window was opened, a brief scout of the horizon was necessary to check for a cat in the room. The cats seemed to be well-balanced individuals, enjoying playing with each other, using litter trays and not showing any obvious signs of longing to be out-of-doors. When a visiting friend suggested that he was “cruel” to keep his cats indoors, Marcus contacted me. What was the truth? Was he being unfair to his pets?

This is a debate that is argued across the world, and it is interesting that there are regional differences in the consensus of opinion that is reached. In Europe, perhaps because cats have been a free-ranging part of our society for so long, it is common for people to feel that cats have a right to range freely. There is this image of cats stalking in long grass, running up small trees and racing around the open space. Many Europeans feel uncomfortable with the idea of cats being kept indoors. They feel that it is almost as bad as keeping a rabbit in a small hutch or a hen in a battery cage.

In North America and Australasia, the opposite view is taken. In these countries, cats are relative newcomers to the ecosystem. When they are allowed outside, they show their prowess as skilled hunters, and they can cause devastating destruction of the dwindling native animal population. It is felt that for the sake of local wildlife, cat owners have an ethical obligation to keep their pets safely indoors. People who allow their cats to roam freely outside are sometimes seen as being irresponsible and uncaring. Of course, there are many people who take different views in each culture. Bird-watchers in Europe frequently complain about the damage that free ranging cats can do to the local wild bird population. And many cat-lovers in parts of North America and Australia do not feel that their own animals cause a problem to the wildlife in their area. So is there a “correct answer” to this dilemma?

There is no doubt that there can be problems when cats are allowed outside.

Firstly, they do cause some damage to the local wild bird and small mammal population. And secondly, cats themselves can be at serious risk of injury when they are allowed to free-range. I know many people who refuse to keep out-of-doors cats because they have lost so many pets on the roads. So it is definitely arguable that in some areas, it is best to keep cats indoors.

What about the quality of life for the cats? Do they suffer because they are not allowed to roam freely? The answer is: perhaps, if you are not careful. Cats have instinctive needs to express certain behaviours, and if indoor life means that they cannot do these activities, they are likely to become stressed. This can cause difficult problems, such as cats hiding all the time, or urinating in the house. If cats have nothing to keep them occupied, they can also become obese, and they can suffer from physical diseases such as diabetes. So when you decide to keep a cat indoors, you have a responsibility to provide for behavioural needs which would normally be obtained naturally.

These include the need to hunt, the option to retreat and hide, the pleasure of climbing and, in general, the need for a cat to have a sense that it is in control of its own activities. Toys are essential. Choose toys that your cat likes to chase and play with. Try a range of toys – small furry ones that squeak and move rapidly are popular. Or feathered toys at the end of a wand-like rod that you can flick back and forwards. You should try to spend at least three play sessions of ten minutes each with your cat, every day. You should also consider a “cat aerobic centre”. This is a series of shelves on a stand, that allow a cat to climb up and down, with a few dangly toys attached, and perhaps a scratching post too (essential if you do not want your cat to shred your furniture and wallpaper). Cats like to be “high up” in a room – it makes them feel secure – so make sure that you provide cat-accessible elevated sleeping spots around the house (e.g. tops of wardrobes and cupboards).

When I discussed the cats’ home arrangements with Marcus, it was obvious that he had already taken the cats’ needs into account, with plenty of toys and climbing places to amuse them. Finally, you can teach your cat to go outside on a harness and lead. Marcus already takes Fluffy and Murphy out for regular walks, and has done so since they were kittens. I reassured Marcus – his cats have every appearance of being contented indoor animals. 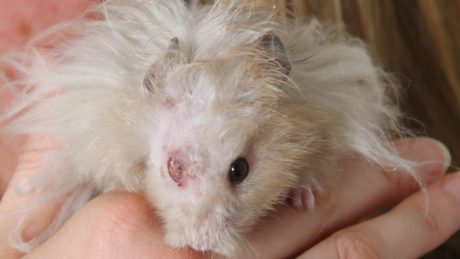 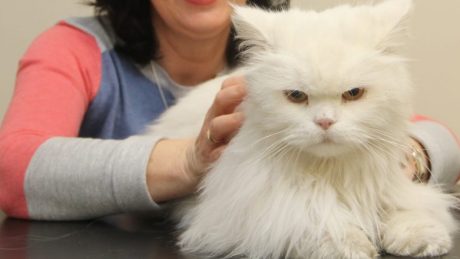 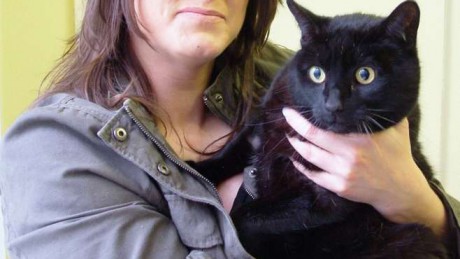