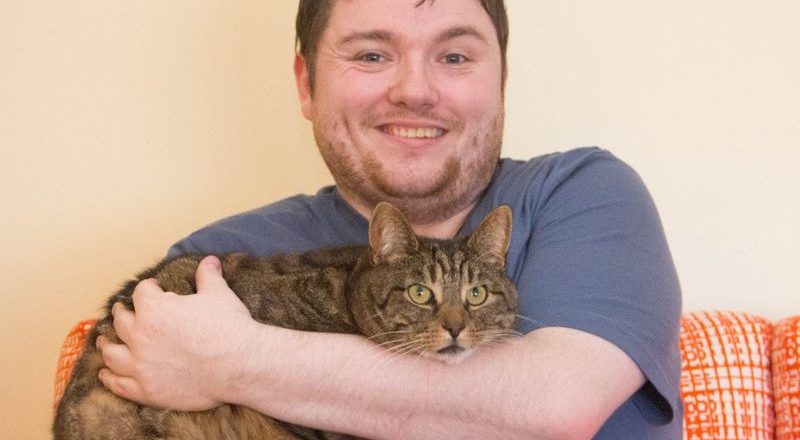 Jason has four cats, and he’s discovered over the years that if they have accidents or fall ill, it can be expensive to go to the vet to give them the care they need. To avoid being in a difficult financial situation where he cannot afford the best level of care, Jason has had each of his cats insured when they’re just kittens.
Most cats are healthy most of the time, and Jason has taken his pets’ safety to an even higher level: he has put up netting in his back garden to ensure that the cats can’t get out. They can still leave the house and run around outdoors, but they can’t go any further than the garden. This means that they are effectively indoor-only pets, and studies have shown that they will have a lower risk of needing to see the vet compared to free ranging cats. They won’t encounter hazards like cars on the road, or predators (such as other cats or dogs), and overall, they are likely to live longer than cats that have free access to outdoors.
Jason gets his cats vaccinated as kittens, but because they never mingle with any other cats, after discussing their health with her vets, he has decided to be more relaxed about annual vaccinations against cat flu and feline enteritis. These viruses are spread from cat to cat, usually by close contact, so the risk of the cats picking them up is low. So far, this has never caused any problems: his cats have never shown any signs of any of the infectious viruses.

Last year, George fell ill with something completely different: he developed a urinary blockage. First, Jason noticed some streaks of blood in the litter tray, and then it was obvious that George was in some sort of pain: he was duller than usual, behaving strangely, and licking under his tail all the time. Jason took him to the vet straight away, and it turned out that a plug of crystals was blocking his urethra (the small tube that runs from his bladder to the outside). He needed to be sedated, then a catheter was pushed into his bladder, pushing the plug of crystals out of the way. George needed repeated visits to the vet, and Jason had to send off a claim to the insurance company for several hundred euro, which was paid without any problems
George was put onto a special diet to reduce the risk of repeated bladder blockages, and he stayed healthy until last month. This time, Jason spotted the problem at the earliest stage: he noticed that George’s behaviour had changed. He became dull, he was hiding away, and he didn’t want to eat. When Jason took him to the vet, an examination confirmed what he’d feared: his bladder was enlarged, over-full with urine because he’d become blocked again. He needed another bout of intensive treatment, with a urinary catheter being placed under sedation, and staying on a drip with intravenous fluids to flush out any crystals. This time, it happened at the weekend, so he had to be transferred to the Belfield-based Pet Emergency Hospital for ongoing care over Saturday and Sunday.
George responded well to treatment, and he’s doing well now. He has gained some weight in the last year, and so Jason is focussing on slimming him down. Studies have shown that overweight and obese cats are more likely to suffer from urinary obstructions. He’s on a special diet, and he’ll come back regularly to our clinic to be weighed by one of our vet nurses to ensure that he’s on track to a new, trimmer shape.

Once the urinary episode was sorted, Jason sent in a claim to his pet insurance company as usual: it was over a thousand euro, after the intensive care he’d needed over the weekend. He expected that payment would be made without question, as it had been last year. So he was surprised when instead of a cheque arriving, there was a delay. He heard from the pet insurance company that because George hadn’t had a vaccination and check up in the past year, he might not be covered by his insurance any more.
Jason was upset when he heard this: he would have understood if George had fallen ill from an illness that vaccination would have prevented. But a urinary obstruction condition can happen to any cat, at any time, and it’s nothing to do with a virus, so the fact that he had not been vaccinated was irrelevant.
When Jason queried the situation, they pointed out that the wording of his pet insurance policy clearly states that insured pets may not be covered if they have not been examined by the vet for their annual check-up. This check up normally takes place when a pet is vaccinated. And since George, as an indoor cat, had not had his vaccine, he had also not had his “check up”, which meant that the pet insurance company were entitled to refuse to make the payment.  This is a standard part of many pet insurance policies.
Jason is hoping that the pet insurance company will take a conciliatory stance as a gesture of goodwill, paying the costs of a condition which would have happened regardless of a vaccination and health check. He’s talking to them just now, and he’ll find out the outcome soon.
Meanwhile, his message to readers is simple: make sure you take the time to read the details of your pet insurance policies. Just because you pay a monthly premium does not mean that you will necessarily be covered at a time of need.