Holly the terrier has a high level of sensitivity

Gertie took on Holly as a rescue dog, eight years ago, from the Wicklow SPCA animal sanctuary. She had been found wandering in the Kilmacurragh estate, not far from the sanctuary. Gertie remembers stories about Kilmacurragh that she was told as a child: there was a rumour that the old ruined house was haunted.

Monastic buildings at Kilmacurragh go back to the seventh century: the monastery was destroyed by British soldiers in the time of King Henry VIII. The land was passed on to Thomas Acton, one of Oliver Cromwell’s men, who used the stones of the ruined old abbey to build a magnificent mansion. The Actons lived in Kilmacurragh for two centuries, but after the family heirs were killed in the First World War, the estate was sold. The house at Kilmacurragh was ruined in a series of fires, but the estate was eventually acquired by the Irish State, and the grounds are now run as an extension of the National Botanic Gardens of Ireland.

Gertie was never sure of the identity of the ghost that haunted Kilmacurragh: was it a monk from Cromwellian times, or was it one of the Actons who had been killed at war? But as far as she’s concerned, since she arrived, Holly has behaved in ways that are so unusual that it’s as if she has human understanding. Gertie wonders if the Kilmacurragh ghost could have come back as a dog.

holly has a high level of sensitivity

Holly has a sensitivity that seems supernatural. She looks at Gertie as if she understands what’s going on, cocking her head to one side as she listens carefully. She barks to let Gertie know that visitors are about to arrive, and she jumps up beside the phone, just before it rings. If anyone in the house is unwell, Holly sits beside them, licking their hand or just sitting quietly, as if offering her sympathy. Gertie says that Holly is an exceptionally aware dog, understanding human moods.

Her most peculiar behaviour is not supernatural, but it’s funny: she loves hiding objects. If Gertie gives Holly a treat, she rarely eats it at once. Instead, she rushes away with it, digging a hole somewhere to hide it. If the back door is open, she dashes outside, digs a hole in the garden, then covers the treat up by pushing over the earth with her muzzle. If the door is closed, she “buries” her treats indoors. As soon as she’s given the treat, she turns around and runs out of the room. It’s like a game she plays: once the treat has been hidden, she comes back, looking at Gertie and wagging her tail. She won’t leave Gertie alone until she agrees to follow the little dog to find out what’s going on. Holly then plays a game, walking ahead of Gertie and looking back all the time, as if egging her on to find the treat. She obviously can’t dig holes in the house, so she does the next best thing: she hides the treats under cushions and pillows. When Gertie finds the treat, Holly is delighted, wagging her tail and happily munching the treasure. Holly sometimes forgets where she’s put the treats. Gertie occasionally goes to bed and feels a lump under her pillow: when she investigates, it’s one of Holly’s half-chewed, saliva-drenched, treats. Gertie could do without discovering half-chewed treats at bedtime, but she adores her little dog. Even if she is a ghost in the form of a dog, she’s a engaging, charming creature who is wonderful company. 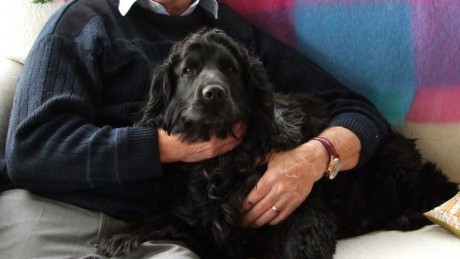 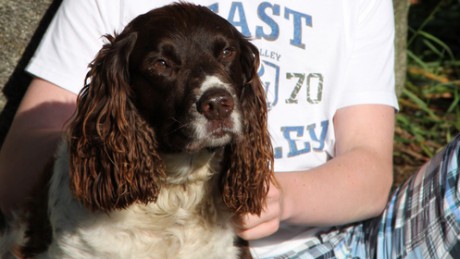 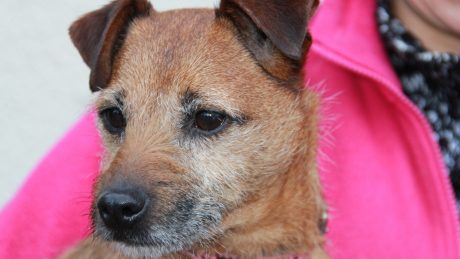