Loulou the 10 year old Shih Tzu had an upset stomach

Helene owns three dogs, so she’s familiar with the minor ailments that are common in the canine world. When Loulou vomited on a Saturday afternoon,  Helene assumed that she was suffering from the type of simple digestive irritation that dogs tend to pick up. As part of their scavenging nature, dogs enjoy sniffing all sorts of strange objects when out on walks, and it’s not unusual for them to take a mouthful of something that disagrees with them. Old rotting leaves, half-eaten ice-creams or chip bags, general debris that’s blowing around in the wind: it’s all interesting to dogs, and they are prone to “munching and thinking about it later”.  Dogs often eat items that disagree with their digestive tract, and a one-off vomit is common as a result.

Helene knew the standard advice for a dog with an upset stomach: complete fasting for 24 hours, offering only boiled water, followed by a bland diet such as cooked chicken and rice for another 24 hours. As long as a dog is bright and well, this simple treatment will resolve most simple digestive upsets.

Despite this sensible approach, Loulou continued to vomit repeatedly. And one day later, she was still dull and quiet, with no interest in food, even refusing to drink water. When Monday morning came around, and Loulou continued to be unwell, Helene knew that it was time to take her to the vet.

Helene’s approach to her dog’s illness made my job easier: she had already completed “phase one” of the normal treatment plan for a dog with an upset digestive system.  Loulou graduated straight into the “further investigations” category of patient. I took a blood sample to carry out a biochemical profile to find out if there was something more serious going on.

I processed the blood in our “in house” laboratory, so I was able to give Helene the results within fifteen minutes. Loulou was dehydrated and she had dramatic elevations of two marker enzymes in her bloodstream: I knew at once that she was suffering from an episode of liver disease.  In a healthy animal, the enzymes remain within set parameters: if the liver is  damaged, the enzymes leak into the bloodstream resulting in high levels in the blood test.

The blood test is useful to identify that the liver has been damaged, but it’s more difficult to work out the precise nature of the cause. Possibilities include bacterial and viral infections, poisons, immune diseases, and even cancer. Further investigations to make an accurate diagnosis include ultrasound and even a liver biopsy. I discussed these options with Helene, and we decided to give Loulou a general supportive treatment for “liver disease”, and if she did not respond well, we would need to consider the extra tests.

Loulou was hospitalised, given intravenous fluids, antibiotics, multivitamins and offered a special diet . She made a dramatic recovery, brightening up almost at once, and beginning to eat within half a day. There was no more vomiting at all. From her rapid response, it seemed most likely that she had suffered from a type of bacterial hepatitis that’s common in older dogs.

She came back a week later for a repeat blood test which confirmed that the elevated liver enzymes were returning to normal levels. The plan is to keep her on antibiotics and other medications for a full month, until her blood tests are completely stabalised.

Loulou is lucky to have made such a full and rapid recovery: the only hint that she’s had a problem is the bright pink bandage on her leg  covering the place where she had an intravenous drip. It could be far, far worse. 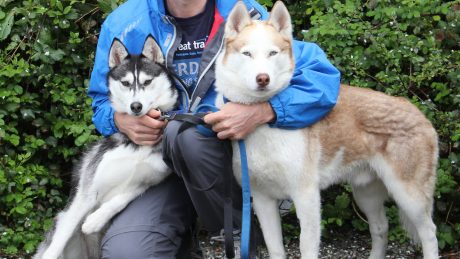 Frost the Siberian Husky who swallowed a fish hook