Mia is adored by Meaghan and her family, but last week, something happened that upset the close relationship between humans and dog: Mia developed foul smelling breath.

Dogs may not normally have the sweetest smelling breath, but it shouldn’t be offensive. There’s normally no discernible odour when Mia exhales, but last week, when she breathed out within sniffing range of Meaghan, the smell could only be described as disgusting. If you can imagine sniffing a rubbish bin that ought to have been collected a couple of weeks previously, you’ll get the general idea.

Mia seemed to be in excellent general health, full of energy and with a good appetite, and there was no obvious cause of the problem. Meaghan decided to try some simple home remedies first. She gave Mia a worm dose, and she bought a breath-freshening spray from the pet shop. The spray did seem to help initially, but its effect soon wore off, and within an hour, Mia’s breath smelt as foul as ever. Meaghan also gave Mia a good shampooing, in case the smell was coming from her coat, but this didn’t help at all.

A week later, the foul smell was getting worse than ever. By now, even Mia seemed to be affected by it. She seemed quiet, and she was less enthusiastic about walks than normal. When Meaghan noticed a trace of blood-stained saliva by the food bowl, she realised that there was something going on that needed veterinary attention, so she brought Mia in to see me.

I examined Mia carefully all over, and when I stood close to her head, I could pick up the bad smell at once. I tried to pinpoint the epicentre of the bad smell, by sniffing gently above, below, and to either side of her head. It was definitely coming from her mouth, but what was the cause? Could there be a rotten tooth? Could there be an infected wound in her mouth?

I tried to get Mia to open her mouth so that I could look inside, but she refused. She wriggled, shook her head, and made it clear that she wanted to be left alone. There was only one option: I gave her a sedative injection, and ten minutes later, she was stretched out on the floor, sleeping soundly. I was now able to open her mouth wide open and inspect the inside of her oral cavity. Mia continued to sleep soundly as I peered inside.

Everything seemed normal: I could see healthy teeth, tongue and gums. Then I found the cause of the problem: she had a piece of stick lodged against the roof of her mouth. This was wedged firmly between the back teeth, and it had been pressing hard against her gums, creating an infected deep ulcer on each side. The infected wounds were producing the foul smell.

The stick was tightly stuck in place, and I had to use forceps to grasp it tightly before pulling it out. I then gave her pain relief and antibiotics, before giving the antidote to the sedation.

Ten minutes later, she was wide awake and ready to go home. Meaghan told me how much Mia enjoyed chewing sticks, and it’s obvious that this is how the problem arose. I’ve suggested that she’s offered a safer chewing option in future – a food-stuffed Kong rubber toy is far less likely to cause problems than a random piece of wood from the garden. 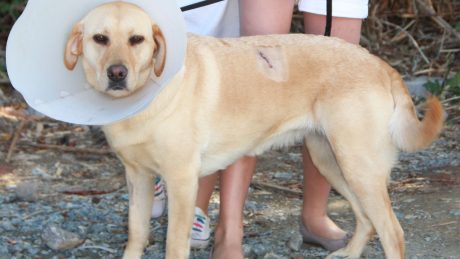