Mary had been looking for a small dog for a few years; she already had a Maltese Terrier called Alfie, and she wanted a companion for him. She follows a few different animal rescue groups across Ireland on Facebook, and she’d been watching the dogs passing through them, waiting for one that really appealed to her. When she saw Millie – a female wire haired terrier cross puppy – she knew that this was exactly the type of dog she wanted. She sent a message to the rescue group, and a few days later, her husband drove across the country to pick her up.
The journey home was long for a young puppy, and poor Millie was sick in the car. But she rallied quickly, and she seemed to settle well into her new home.  Alfie is a bit miffed to have another dog in the house, and he has been going out of his way to ignore her. But in time, he’s likely to adapt, and with luck, they will become good friends.

millie came to the vet for a check up

Mary was aware that there are often a number of issues that need to be tackled with new pups, so she brought Millie to me for a thorough check up. When I examined her, it was obvious that she was still adjusting to her new home: she was quiet and a little bit cowed. There is a great deal of stress involved for a pup in leaving their original family and moving to an entirely new household. Most pups tend to retreat into themselves initially, staying quieter and more reserved than normal. Then over a few weeks, they gain in confidence, and become more bouncy and active. As I checked her over, I could find nothing physically wrong with her: her mouth, eyes, ears, skin, heart, lungs, abdomen and limbs were all perfectly normal. Mary confirmed that she had been eating well – she’s on a type of dry kibble – and all of her bodily functions were proceeding normally. She’s still not house trained, but she’s still a young pup.
So in essence, Mary had managed to rescue a lovely new pet. However, when I delved into some of the details of Millie’s background, I discovered that there were a few issues that needed to be remedied.
First, I was surprised to discover that she was not microchipped. In Ireland, there are strict laws around microchipping of dogs. All dogs must be microchipped and registered to their owners, and it is illegal for a dog – of any age – to change hands unless it has been microchipped. This does not only apply to pedigree dogs; it applies to all dogs, of all types, both those in private ownership and those from rescue centres. If you intend to keep a puppy yourself, you don’t need to get it microchipped till it’s 12 weeks of age. But if you sell or rehome a puppy at any age, you need to make sure that it’s microchipped first.
Obviously, there is a cost to getting dogs microchipped, and so perhaps it’s easy to understand why hard-pressed rescue groups may not always get this done. However the law is the law, and any responsible group should do their utmost to comply. Mary paid a sum of money for the pup, as a donation to the rescue group.  If they had asked for an extra sum to cover the microchipping, she’d have happily paid it. The best rescue groups do this routinely.
This issue was easily sorted: I implanted a microchip into Millie then and there.
There was a second complication with Millie, and this involved vaccination. Mary had been given a vaccine certificate, but when she checked it was for a different dog. So she called the rescue group and they emailed a photocopy of the correct certificate. However this only named a “terrier pup” and the space that was meant to be signed by a vet had been signed by a member of staff at the rescue centre. While some breeders and rescue centre staff do administer vaccines, there is not the same guarantee that the vaccine has been stored correctly (in the fridge) and administered properly as when a vet has done this.
To be safe, in such situations, an extra vaccination has to be given by a vet, so that’s what I did for Millie. She needs a final vaccine at 12 weeks of age anyway, so in the end it was just another minor problem that was easily fixed.
Finally, there was a third issue: nobody had told Mary whether or not Millie had been wormed. It’s critically important that all puppies are wormed regularly: they can carry a worm burden that can make them very ill, and there’s also a risk of worms being passed on to humans. For this reason, whenever a puppy is rehomed, the new owner should be told how many worm doses have already been given. In the absence of any information, I started Millie on a new worming course, and once again, this means that she’ll be fine.
Millie is an adorable puppy. She is already a much-loved pet in Mary’s household. It’s understandable that rescue groups are always under immense pressure for time and money, but it’s really important that when animals are rehomed, the necessary details are completed as comprehensively as possible.
If you get a pup from a rescue group, don’t forget to ask about microchips, vaccinations and worming. For the sake of your pup’s health and safety, these details must be properly sorted. 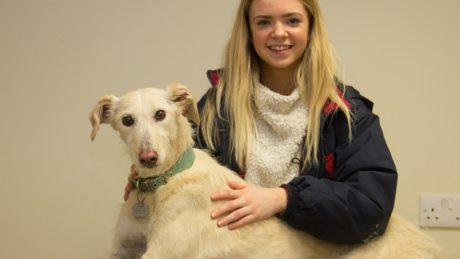