Monty is a fit, strong dog who loves going for walks. A month ago, he started to limp on his left front leg, so Michael and Jenny brought him to see me to find out what was going on.

Dogs can’t explain where they are sore, so when any lame dog is brought to the vet, there’s a standard “lameness examination” is carried out, to pinpoint the source of discomfort. The vet starts at the tips of the toes, and works up the leg, pressing, squeezing and flexing every part of the limb, trying to find out the focus of pain that’s causing the lameness. In older dogs like Monty, it’s common to have arthritis in the shoulder or elbow: when the affected joint is flexed and extended by the vet, it’s painful. That’s what I initially expected to find when I examined Monty, but in fact, it was something else completely.
I didn’t have to look for long to find the source of the problem: when I squeezed the outermost toe of his left foreleg, he yelped in pain and pulled away from me. On closer examination, I could see that this toe was swollen, as well as being painful to touch.
There are many simple causes of swollen toes, including sprains, bruises and nail bed infections. It’s impossible to make a precise diagnosis like this by just examining a dog, but most cases like this recover easily with a general treatment of strict rest, pain relief and a course of antibiotics. I gave this treatment to Monty, explaining that if he was not completely better after a week, I’d need to see him again for a review.
When I saw Monty in my waiting room a week later, I knew that it must be something more complicated. Michael and Jenny explained that it was no better at all, and in fact, if anything it was worse. My examination of Monty confirmed this: his toe was visibly swollen and hot to touch, and now he winced if I just touched it.

monty had a tumour on his toe

At this stage, it was obvious that this was more than just a mild injury. I had to break the bad news was that when an older dog like Monty develops a painful, swollen toe that doesn’t respond to simple treatment, cancer is the most common cause. Worse than that, over 80% of these cases are malignant, with cancer cells spreading around the body. To be positive, this meant that there was a 20% chance that this was a benign tumour, but those odds weren’t great: it was a very worrying time for Michael and Jennifer.
It was important that the diagnosis was confirmed one way or another, so Monty was admitted to our hospital for a detailed work up.
First, I took x-ray pictures of his swollen toe: these showed me that there was extensive destruction of the bones in his toe. This is generally a bad sign, suggesting that cancerous tissue has obliterated the healthy bone.
Next, I took x-rays of his chest: if the cancer had spread, this is the first place that would be affected. The good news was that the xrays were clear: there was no sign of cancer here. This meant that there was hope that the cancer might still be confined to his toe, and if we amputated this, he could be cured.
After discussing this with Michael and Jennifer, I removed the affected toe on the same day. This was a complex  operation involving delicate surgery to ensure that his foot was still comfortable enough to walk on. A large dressing was used to cover the wound, to protect it from Monty chewing or licking the area. It’s common for dogs to delay healing by following their natural instinct to lick their wounds.
Monty then came back to see me every two or three days to have his dressing changed. He was a good patient, sitting calmly and allowing me to work on him without flinching, wriggling or growling. His wound healed well, and ten days after the operation, I removed the stitches, and Monty was able to start going for walks again. His lameness had been cured, but a big question remained: what type of cancer had affected his toe, and would it come back again?
I had sent the amputated toe off to the laboratory for full analysis. We normally get results within four or five days, but there was an unusual delay in Monty’s case. They wanted to analyse the bones of his toe in detail, and that meant that they had to “decalcify”  the toe, soaking it in an acidic solution to soften the bones, so that they could take slices to examine under the microscope. Michael and Jennifer had been waiting anxiously for the results, and finally, after two weeks, the detailed report arrived in the week before Christmas.

To my surprise, it was good news. Monty’s swollen toe had been caused by a tumour, as I expected, but it was a very rare type of toe tumour that was completely benign. The tumour had been a “nail bed keratoacanthoma”; this is exceptionally rare, and I had never seen one before in thirty years of being a vet.
The toe had definitely needed to be removed: there was no way it could have been cured. But the tumour was not malignant, so it would definitely not spread to elsewhere in Monty’s body.
I reassured Michael and Jennifer than Monty had been completely and permanently cured. The laboratory had just delivered the perfect Christmas present! 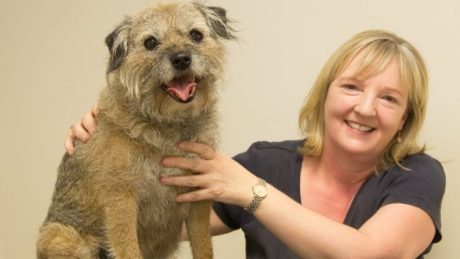