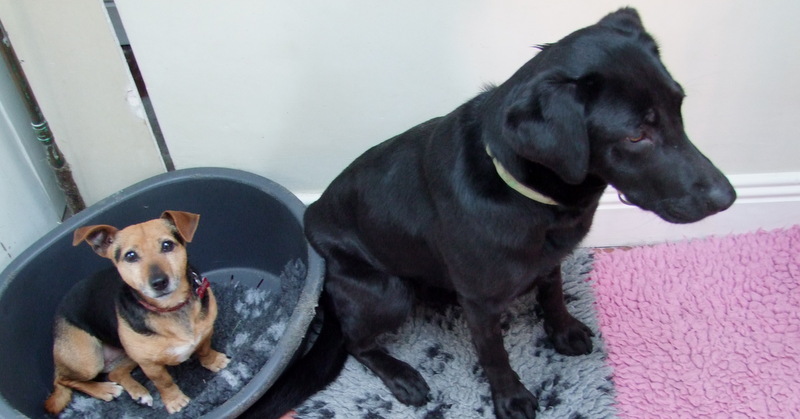 Technology is an unavoidable part of our lives, and pet lovers are no different to anyone else. The latest electronic gizmos can make our lives more enjoyable and more efficient. Today, I’m writing about a few of the gadgets and accessories that I use as part of my own daily life.

The most interesting and innovative gadget has to be the Samsung SmartCam. This is a wifi smart home camera: once you have the device configured, it plugs you plug it into a power socket anywhere within the wifi zone of your home, and it’s ready to go. The device has many uses, but my particular interest is in pet monitoring. After setting it up opposite Finzi and Kiko’s sleeping area, I’m able to check in on my dogs whenever I want, via an application on my mobile phone or iPad. There’s even two-way sound, so I can talk to my dogs, and listen to them.

This type of device is not an excuse for leaving dogs “home alone” all day, but I can imagine a number of instances where an owner might find it useful. Do you go away on trips, leaving other family  members in charge of your pets? Do you worry about how the dogs are doing? Would you feel reassured if you could actually see them? The Samsung SmartCam lets you do this. 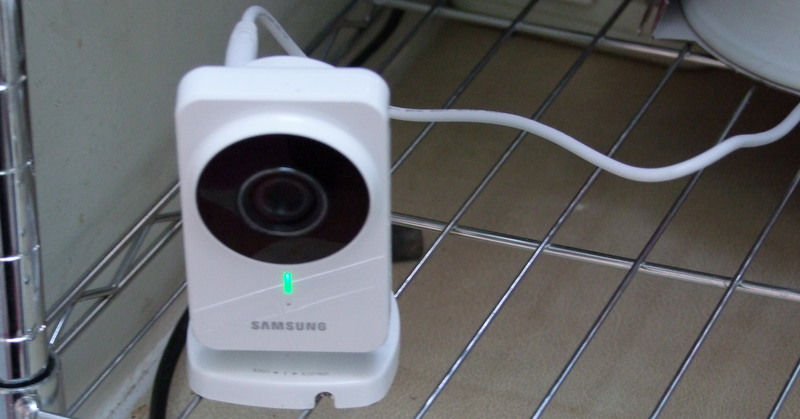 Like all technology, it’s not always quite as easy to get it set up as you’d like. If all goes swimmingly well, it’s astonishingly easy, as in the simple set up guide. You plug it in, press a couple of buttons and it’s done. But technology often seems to have glitches, and I found myself pressing buttons, holding them down for three seconds, trying to read tiny serial numbers to key into the set up page, plugging it into my router, and then having to start all over again. Like most most computer gadgetry, once it’s set up, it just keeps on working, but for non-technology-savvy people, you need to be ready to spend a few hours fiddling with it to get it just right. Or ask a computer-whizz friend to do it for you. 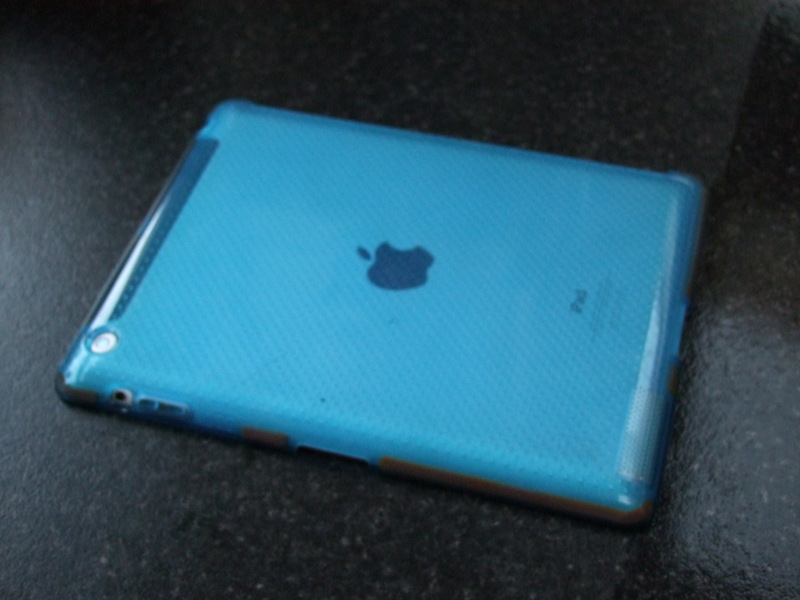 I am a fan of the iPad– it has a useful role in my veterinary and media life. I use it to take photos of cases, and to post them to Facebook. But it’s a pricey enough gadget, and I worry about damaging it when I have it out and about. Animals create an element of unpredictability, jumping up and knocking things over. So a protective case is an essential part of my iPad kit. 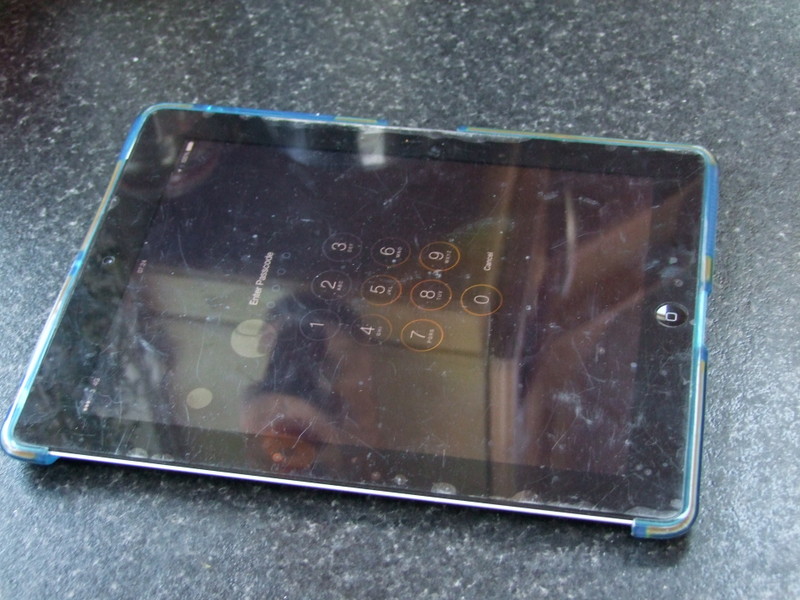 I use a standard stick-on film over the front of the screen, and as you can see, even with this protection, my iPad can look a little battered and “imperfect”. But remember, it’s a piece of working kit: superficial blemishes don’t matter. The more interesting piece of iPad protective kit is the Tech21 case, snugly fitted over the back of my iPad like a protective glove.

It gives the iPad a non-slip back, so that I can put it on my consulting table knowing that it’s not going to slide off if an animal knocks it with a scrabbling paw. And it gives the iPad decent impact protection: I have dropped it several times, and the Tech21 cover has stopped any damage from occurring. 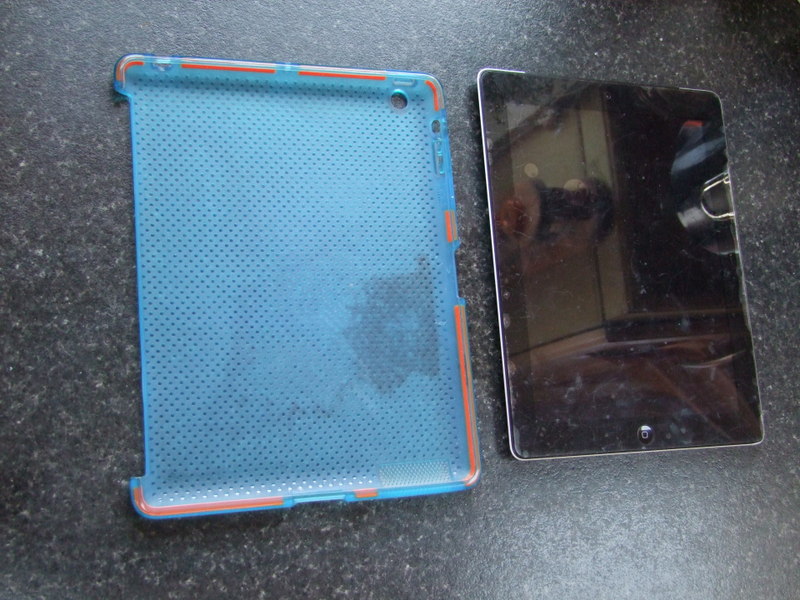 The case looks quite a bit bigger than the iPad in the photo above, but it clips on tightly and once it’s in place, you don’t even notice it’s there.  You can still access all the buttons and controls of the iPad. It’s a simple accessory, but I’ve become an enthusiastic fan. 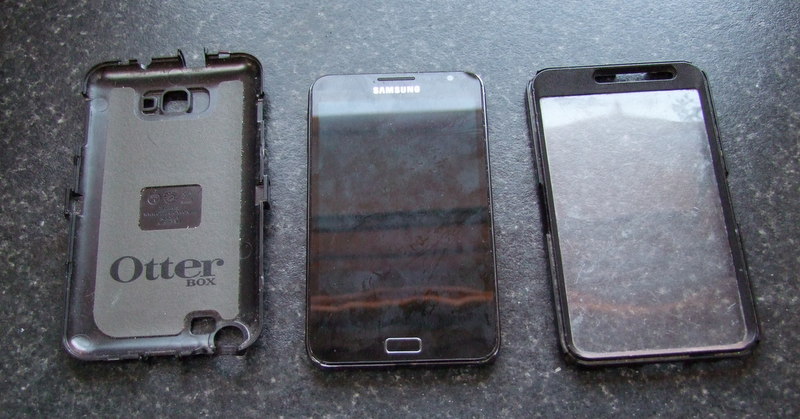 I also use my mobile phone in my daily work, and again, I discovered early in the days of mobile phones that I seem to be accident prone. I got fed up with paying for shattered screens, so when I bought my latest phone (a Samsung Note, which is like a hybrid between a phone and a tablet: it’s big), I also invested in a decent protective case. 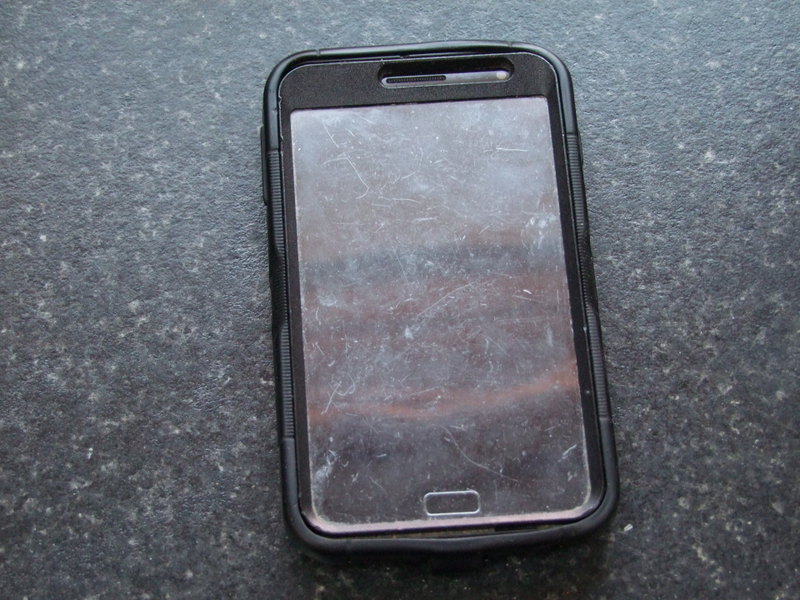 The Otterbox case makes my phone bigger, but it’s completely protected from damage

The Otterbox case provides physical protection from knocks and falls, as well as some degree of water-resistance. I’ve had this phone for a couple of years now, and despite many tumbles, it’s been kept safe and functional thanks to this case. 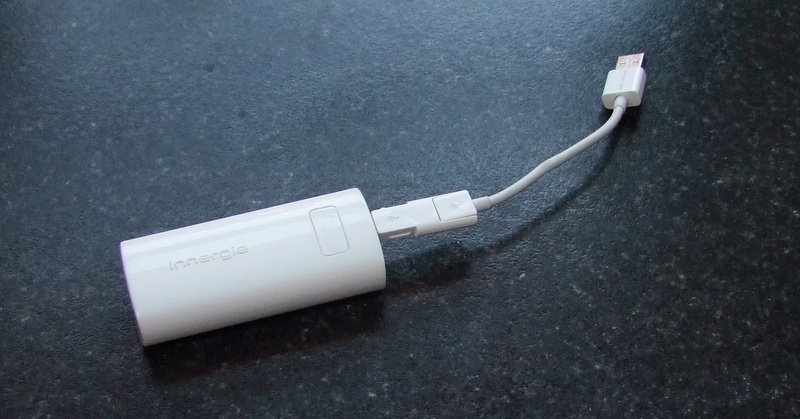 The last gadget to mention today is a simple one: a portable phone charger. Technology is utterly dependent on power, and when I’m out and about with my iPad and mobile phone, I am in trouble if I run out of juice. The Innergie Pocket Compact Duo has enough power to give up to four smart phones a full charge, and it does it quickly. I can plug in my Samsung Note phone and my iPad at the same time into this device, and both will be rapidly fully charged.

My blogging, Facebooking and Twittering would not be the same without a steady flow of images and updating: if I ran out of electricity, it couldn’t happen. A simple source of instant portable power is an essential part of my kit.

Much of this technology is personal: it suits my lifestyle, but it wouldn’t necessarily be needed for others. But when I think of people with animals, perhaps out walking dogs, perhaps tending to feral cats, or just being out and about generally, I suspect that many of you may find some of these devices useful. I haven’t stated any prices, because these vary from place to place, and from time to time – if you are interested, click on the links and you’ll find out everything you need to know.

Any comments? Let me know via the Facebook discussion….

Pet product review – a toy that can save a dog’s life: Safestix 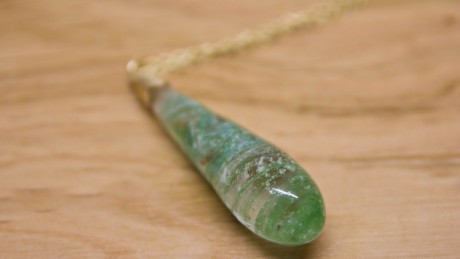 Pet Product review: looking after your pet’s remains after their death in a novel way – “cremation jewellery” 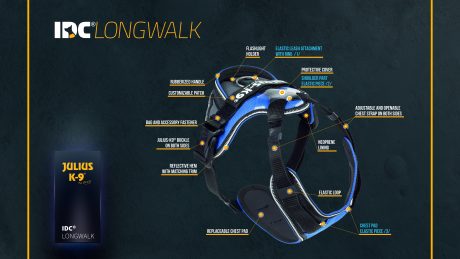