The Petfix Vet Spot on RTE’s Today Show: getting a new puppy

Watch the video to see the Petfix Vet Spot on RTE’s Today show: learn about what to do if considering getting a new puppy.

See below for more detailed notes on the topic

How to choose a new pet

The biggest mistake that people make when getting a new pet is to rush into it, rather than planning carefully. Typically, people decide that they want a particular breed or type of dog, they search for one online, they pay significant sums of money for it and that’s it. And right now, people are paying crazily high prices: around five times the prices for puppies a year ago, due to the huge demand for dogs by staying-at-home families during COVID. Cats are less popular as pets, but the same type of situation is happening too.

So a few tips:

Essentially, puppy adverts should include:

If these boxes are not ticked, do not proceed.
A new Irish website www.petbond.ie  has been set up to help people find healthy, happy new pets, from ethical backgrounds, and their sources include rescue centres as well as private breeders.

How to transport the new puppy home

How to make the new puppy or kitten feel at home

The process of leaving their family and arriving in a new home is a normal and natural part of life for young animals. There is some unavoidable stress, but pups and kittens have adaptable minds, and as long as care is taken to avoid big shocks, most rapidly adjust to their new home environment and family.

What to feed a new pup or kitten?

The best starting point is to continue to feed the same diet that was fed in their original home. Good breeders normally give new owners a small supply of the same pet food, so that they can continue to eat the same food during the initial stressful period while they are adapting to their new home.
Choose carefully for a longer term diet for your pup or kitten; this depends on breed, size, activity levels, and  budget. There are some excellent online guides to choosing dog food now available, but be aware that people can be very opinionated: make sure that you get your information from a trusted source. (e.g. https://petfixclub.com/choosing-the-right-food-video/)
As an example, many people who feed their dogs on raw meat seem to believe that this is the best diet for every animal: the truth is that there are some risks attached to raw diets (e.g they can carry bacteria that can make humans ill) so if there are immunocompromised people in the home,it is definitely a bad idea to use raw food.

Most pups should be fed:

The feeding quantity guidelines on the packaging are just guidelines: you should apply common sense:
If the pup is chasing the empty bowl around the floor for five minutes after they’ve finished, you should be feeding them more.
If they routinely leave half a bowlful behind, start to offer them less.
Pups can be finicky eaters, and it’s easy to find yourself being “trained” by a smart young dog. Some dogs learn that if they turn their heads away from their dinner, their owner will soon offer them something tastier (but not necessarily better for them). So in general, it’s best to choose a good quality diet, leave it down with the pup for twenty minutes, and if it’s not been eaten, take it away. Then offer a fresh bowl of food at the next feeding time, again leaving it down for twenty minutes then removing it. If you take this no-nonsense approach, most pups will soon learn that the easiest option is just to tuck into their food when it’s offered.

The importance of good early socialisation of pups.

A well socialised puppy is more likely to develop into a well-balanced, calm, obedient adult dog.
A badly socialised pup is more likely to be a frightened, nervous, disobedient, aggressive adult dog.
Early socialisation is critically important, even before you have your pet. Breeders should be socialising pups from 2 weeks of age onwards, so ask about this when you get your pup. A pup should be calm and friendly: do not choose a nervous, anxious pup as this suggests poor early socialisation.
Puppies are geared to learn about and accept new experiences easily until they are around 12 weeks of age, up to 16 weeks max; after this, their minds become less adaptable, and it’s more difficult for them to adjust to new experiences. For this reason, it’s important to take specific steps to optimise their social experiences while they are young. The idea is to encourage them to enjoy a wide range of new experiences while not traumatising them by going too far, too quickly. The Kennel Club has designed a specific Puppy Socialisation Plan to be used by breeders and new owners, and it’s well worth following this as closely as possible.

How to introduce a new puppy to the family dog

One of the big worries facing new puppy owners is the reaction of an established family pet. It can be to predict how this will go, but previous reactions of the dog-in-residence to other animals should give you some clues. If your dog is a social creature, enjoying the company of other dogs on walks, this is positive
If your dog is aggressive to other animals, and  isn’t friendly and playful, you are more likely to encounter problems.
For a smooth introduction, the general idea is to make the puppy as unthreatening as possible.

How introduce a new puppy or kitten to the family cat

Most cats are adept at managing introductions to new animals like puppies and kittens: they have enough life experience to know how they want things to go. They may wish to engage up to a point, before finally either telling the young animal to go away (with a hiss and perhaps a batted paw) or choosing to move out of their range (e.g. jumping onto a chair or out of the cat flap). Again, you can facilitate a smooth meeting by allowing the cat to smell the new bedding before the animal arrives, and by keeping the new arrival in its carrier for the first few hours, so that the cat can come up and have a sniff/look on his/her own terms.
As with the dog, you should ensure that the cat always has an escape route, such as a chair to jump onto or a doorway to run out of. As long as a cat has other options, they are generally unlikely to react in an aggressive way to a new arrival. Close observation is important however, since animals – both dogs and cats – can be unpredictable in social situations.

How to get a new puppy through its first night

Your new puppy will be reassured by the scent from its original bedding, and the extra scents of a nearby diffuser should add to a sense of calmness. From the pup’s arrival, instigate a daily routine, so that your pup soon learns what’s expected. It can be helpful to offer supper a couple of hours before bedtime, followed by a period of play/ interaction, then a quiet interlude winding down towards bedtime. Then:

How to stop a new puppy from crying

Your new pup may not have experienced sleeping on their own: up until this time, their short lifetime will have been filled with companionship from mother and siblings. However the adaptability of pups means that most rapidly adapt to their new situation of being on their own.

They may whine a little, but you should not react immediately if you hear this: if you go to them at once, you will teach them that whining gets rapid results, and they will be more likely to do this whenever they want anything. Instead, ensure that their set up is as ideal as possible, with comfy bedding, comforting background noise (with a radio playing), and a warm ambient temperature.
Try to ignore them if they cry, and most often, after a few minutes, they will accept their new environment and sleep.
If the crying persists, check to make sure there is not a real issue (such as a paw trapped somewhere), and then after reassuring them, leave them in peace.
Try to be less reactive rather than over-protective: this usually works best for owner and pup.
Separation anxiety is a common problem in young adult dogs, and if you can teach your pup to be on its own comfortably from an early stage, they are more likely to be happy in their own company as they get older.

How to train a new puppy and kitten

Young puppies are intelligent and they learn quickly. The most important early tasks to learn are control of urination and defaecation. The “indoor kennel” concept is the best way of teaching this: dogs have a natural instinct not to go in their own den, so even a young animal with no training is unwilling to “do their business” in their own bed.
The house-training process starts by recognising the most likely times that a puppy will need to go to the toilet:

At these times, you should take the puppy outside, and allow them to play outdoors until they do the necessary job. And while they are piddling/poohing, take time to tell them what wonderful little creatures they are. You can even teach them to go on command, by repeating a specific word at the same time as they are are doing the act (e.g. “busy busy”)
If you cannot get outside (eg in foul weather or if you live in an apartment), you can use a puppy pad for the same purpose: put the pup onto the pad at the times they are likely to go, praising them whenever they do.
Puppies soon learn what’s expected of them, and house training issues are rare in pups over four months of age.
Kittens are even easier to train: they nearly always naturally start to use a litter tray with no special encouragement. 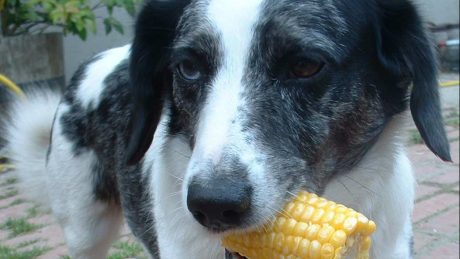 Enjoying a barbecue this weekend? Don’t forget your pets