This week’s podcast discusses ticks and Lyme Disease, which are both found in Ireland, the UK, and much of the rest of the world.

To listen, click here or on the podcast at the foot of this page. I’ve written fairly detailed notes on this topic below: I sourced this information when preparing for the radio show, and it’s too useful not to share it in a written blog post.

As a new graduate vet, I spent eight months in Swaziland (between South Africa and Mozambique) working on a project involving cattle ticks. At that point, every cow in the country was plunged through a dip tank full of chemicals to kill ticks, and our research aimed to find a better way of dealing with this issue. I learned a lot about ticks during my time in Africa, including seeing dogs carrying massive tick burdens, like bunches of grapes hanging from their bodies (see the photo at the top of this page).

The potential of ticks to cause disease problems is closely linked to the precise species of tick: those that are able to attach to a widest range of species are the most dangerous because they are able to pass on the widest number of diseases to the most creatures.

Lyme disease is caused by spirochaete bacteria called Borrelia burgdorferi. It occurs in a wide variety of mammals but dogs and humans are more susceptible to disease. The signs of disease – in dogs and people – are immune mediated i.e. rather than the bacteria actually causing damage itself, it’s the way the immune system of the body reacts to the bug that causes problems. Signs include acute arthritis in one or more joints with lameness, joint swelling and heat. Other signs include fever, anorexia, lethargy and enlarged lymph nodes.

The strange thing is that treatment is easy: a 3 – 4 week course of antibiotic provides a complete cure if given early. The challenge is to make the diagnosis in the first place. The condition often remains undiagnosed, or worse, misdiagnosed, so that the wrong treatment is given, and serious, chronic damage takes place in the body.

Most canine infections are sub-clinical (i.e. animals are not visibly unwell) with only 5 to 10 percent of infected dogs developing clinical signs. Or to put it the other way, 90 -95% of dogs infected with Lyme Disease show no sign of illness and do not need to be treated.

In humans, the most common initial sign is a circular skin rash known as erythema migrans, which can act as an early sign of infection. This is not always seen, but people should be alert to this possibility and let their doctor know if they see it. Dogs don’t get this.

It has been suggested that dog owners might be at greater risk of infection from Lyme disease than people without dogs, but studies have found no correlation between dog ownership and risk of infection, and infected dogs pose little or no direct risk to humans. The risk to humans comes from direct contact with ticks, so if a dog brings lots of ticks back to a home, that causes a risk, or if a human accompanies a dog to an areas where there are lots of ticks, this will also put them at increased risk of picking up ticks.

Use of tick preventative products

In dogs and humans, the risk of infection with Lyme Disease can be reduced significantly by rapid removal of any ticks that attach. Most Lyme Disease infection is thought to be transmitted at least 24 hours after attachment.

In dogs at high risk, the use of routine preventative products that rapidly kill or repel ticks makes sense, to reduce the time that ticks spend feeding and therefore to minimise any transmission of infection.

Any dog with a history of picking up high numbers of ticks should be routinely given tick preventive products to avoid recurrent exposure to ticks. They are potent medications and are often prescription-only, so you’ll need to get them from your vet.

Check your dog and yourself for ticks every day

Pet owners should check their dogs every 24 hours and carefully remove any ticks found with a tick removing tool, using a “twist and pull” action. The O’Tom Tick Hook is the most widely available. After removal, ticks should be handled with care, using gloves, and disposed of safely (e.g into fire, or squashing while inside plastic bag then into bin).

A dog vaccine is available for Lyme disease prevention (Merilym3) if a dog is judged to be at high risk. The vaccine produces antibodies in the dog, and uniquely, these work in the ticks themselves, not in the dogs. The tick has a blood meal, swallowing antibodies in the dog’s blood. These antibodies prevent migration of the Lyme Disease bacteria to the salivary glands of the ticks, reducing the risk of them passing the infection on to dogs.

The vaccine is given as a primary series of 2 vaccines, 2-4 weeks apart, with an annual booster. Vaccination against Lyme disease is not used to treat the condition at all, and Lyme vaccines are not considered core vaccines for dogs. And even if the vaccine is used, effective tick control is still important

A vaccine for humans is not currently available. However, twenty five years ago, a vaccine called LYMErix was on the market, preventing between 76 and 92 percent of infections. Rumours (later disproved) that the vaccine might actually cause arthritis in humans meant that it became difficult to sell the vaccine and it was taken off the market. The vaccine for dogs is almost identical to this old human one.
A new Lyme vaccine for humans is currently being developed in France.
In the absence of a vaccine, people should remove ticks if they find any attached to them, and they should tell doctors that they have a history of contact with ticks if they ever develop odd signs (e.g. skin rash, arthritis)

The following questions were asked this week: 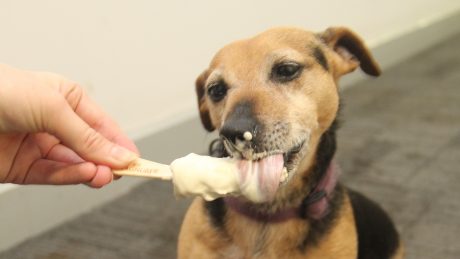