Dogs going to the movies

When Emma won tickets to an Irish movie premiere, they were tickets with a difference. The movie was Disney’s new animal-themed “Beverley Hills Chihuahua”, and the tickets made it clear that pet dogs were as welcome to the screening as their owners.

The movie is about a pampered Chihuahua living in Beverley Hills (voiced by Drew Barrymore) who gets lost on the streets of Mexico. The organisers had clearly decided that this was an opportunity to bring the pampered dogs of Dublin out for the night.

Emma went along with her mother and a couple of friends, and they were fortunate enough to have seats in the VIP section of the cinema at Dundrum Shopping Centre. There were leather seats, and plenty of leg room, so there was more than enough space for little Max to sit on Emma’s lap and enjoy the screening.

As Emma looked around her, she realised that almost everyone in the VIP section had a dog with them. Twink was there, with her two daughters Naomi and Chloe, and their two dogs Rosie Kinnity and Jilly. Many of the VIP dogs were dressed up, typically in pink frilly outfits, in keeping with the over-the-top spoilt dog theme of the movie.
As Emma looked down from the VIP section into the main movie seating area, she could see that around half of those at the premiere had bought their dogs with them. The invitations had requested that dogs should be small enough to be carried, so there weren’t any German Shepherds or Golden Retrievers. But there were plenty of Chihuahuas, Cavaliers, Poodles, Bichons Frise, Shih Tzus, and Yorkshire Terriers, as well as a scattering of cross-bred mutts. The evening was like a lesson in recognising small dog breeds.

The range of outfits worn by the dogs was equally diverse, with tuxedos and ball gowns, as well as coats covered in sparkling bling. There was even fancy dress, with one dog dressed as an angel with wings. Some owners had come along in matching outfits, with the polka dots on their own dresses and handbags matching the dots on their dog’s coat. There are now shops in Dublin (like www.mollys.ie in Dun Laoghaire) that specialise in outfits for animals, so there was no excuse for dogs to attend the premiere without due attention to their wardrobe.

During the movie screening, the dogs sat on their owners’ laps, and they behaved themselves remarkably well. In the darkness, Emma couldn’t see what other dogs were doing but Max certainly seemed to enjoy watching the movie. When the actor dogs barked during the film, Max sat up, cocked his head to the side, and looked even more intently at the screen. In the same way as bursts of laughter could be heard amongst the humans in the audience, there were occasional bouts of barking across the cinema from time to time, when a particular scene grabbed the dogs’ attention. Of course dogs wouldn’t be following the narrative, but they certainly seemed to understand that the movie was entertainment, and they looked as if they were being successfully entertained.

At the end of the movie, people gathered in the foyer, socialising with their dogs. They were looking at the various dog outfits, admiring each other’s pets, and taking photos of each other. There was even a clutch of press photographers, snapping away with flash cameras, as would be expected at a movie premiere.

As Emma left the event, she walked through Dundrum Shopping Centre with Max in her arms. The mood of the movie followed her as she went. Shoppers stopped to stare and point as the group of well-dressed dogs and owners made their way back to the car parks.

Max enjoyed his day out at the movies, but it’s probably a one-off occasion. In Ireland, there’s a clear line that separates humans from dogs at most events. Guide dogs are allowed almost anywhere, but pet dogs are usually frowned upon when people are socialising. “Health and safety” reasons are usually cited, and “no insurance” is another common line.

I know pubs where dogs used to be brought in as “arm candy”, but they’ve been banned over the years. Many shops now have signs saying “No Dogs”. Even if dogs are not explicitly banned, you get the feeling that they would not be made welcome if an owner tried to include them. Part of the lack of dog-friendliness probably goes back to the traditional Irish view of dogs as farm animals, whose place is in the yard. This old-fashioned attitude may have been compounded by occasional unfortunate incidents. It’s true that if an uncontrolled dog ever bites another customer, there could be unfortunate consequences for the proprietors of the premises.

Such problems are not insurmountable – in other countries, such as France, small dogs are welcome wherever humans gather socially. It’s common to see dogs in restaurants, sitting on their owners’ knees, enjoying small portions of the evening’s menu. I’ve seen cats with their owners in special animal carriages on trains in Finland. And in the United Kingdom, there are directories and websites dedicated to providing information about pet friendly premises.

If the enthusiasm and interest shown by onlookers at the movie premiere are anything to go by, the Irish attitude to dogs in public places could be changing. Look out for the dogs in the audience at the next movie featuring animals. 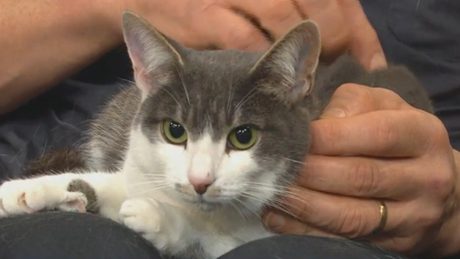 Halloween and pets: the story of Sissi, the cat who was shot with a rifle | East Coast Radio