Hosting the world’s vets in Ireland

Andrew Byrne is one of my partners at Brayvet, and is pictured here with Elsa, his five year old Golden Retriever. Andrew is the president of the European group of veterinary organisations, and this weekend he has been fully occupied at a worldwide gathering of vets in Dublin.

Andrew is just reaching the end of one of the busiest weeks in his life. He is used to long working days at his vet clinic in Bray, but this week’s events have not been directly to do with treating dogs and cats. Instead, Andrew has been busy under a different guise: he is the President of the Europe-wide federation of pet vets, and he has been acting as host to representatives of forty European countries. In fact, the Dublin meeting has been even bigger than just Europe – the event has “doubled up” as the annual meeting of the world-wide pet vet community. Eighty six countries have sent vets to Dublin, with over two and a half thousand vets visiting the RDS. It is no wonder that Andrew has been under pressure.

Andrew became involved in his local veterinary organisation over a decade ago, here in Ireland. There were two reasons for his interest in getting involved. Firstly, veterinary organisations need to set up educational courses for vets, making sure that lecturers visit Ireland to keep vets up to date with the latest scientific developments for treating pets. Volunteers are always needed to organise visiting speakers, and Andrew was keen to assist with this. The second reason for his interest in working with the veterinary organisation was a broader ambition, which was to play a part in improving the way that society deals with pets, and with the vets who treat pets.

Human society is complex, but it basically works by elected politicians forming a government, and the government making laws which are implemented by civil servants. As part of that process, it is important that every sector of society is represented, and that includes both vets and pets. Vets are trained to be experts on animals, and as such, they are in a good position to give feedback to government on different aspects of the way that animals are catered for under legislation and in other ways. The opinions of vets are usually sought via the organisations that represent vets, and so the best way for an individual vet to “make a difference” is often to become active within such an organisation.

After a few years of working on local veterinary committees in Ireland, Andrew became aware of the growing importance of Europe in the day to day life of Irish people (and animals). He volunteered to represent Irish vets within the Europe-wide gathering of veterinary organisations. He enjoyed this work, which included learning about other countries, and being involved with Europe-wide initiatives in areas such as training of veterinary nurses, and the publication of an international educational veterinary journal. Before long, Andrew found himself on the European organising committee, and this eventually led to his current position: as President of the Federation of European Companion Animal Veterinary Associations (FECAVA)

This week’s meeting at the RDS is the high point of his presidency. It is the largest veterinary conference ever to be held in Ireland, and Ireland is the smallest country to have hosted such a large global congress. Previous locations have included Sydney, Bangkok, Vancouver, Amsterdam and London. The choice of Ireland as a host country is a positive reflection on Ireland’s ongoing appeal as an international destination.

There have been two types of meetings going on: political and educational.

The political meetings have been held between vets representing many different countries, discussing issues that affect pets around the world. Subjects include how to improve animal welfare in less advantaged countries, how to use the latest advances in genetics to improve the breeding of pets, and how to work together with the latest and best vaccines to control diseases that are world-wide problems.

The educational aspects of the gathering have been a central part of the week. Visiting lecturers have been amongst the top authorities in the world, and they have been giving “state-of-the-art” updates on a wide range of pet illnesses and issues. There have been over sixty lectures every day, on subjects ranging from “Why do dogs bite, and what can be done to stop them” to “The latest advances in cancer diagnosis”. Other issues being covered include the treatment of wildlife, dealing with MRSA in vet practices and how to diagnose and treat elderly cats with the feline equivalent of Alzheimer’s Disease. The lectures have been chosen to be relevant to vets in practice, so that the vets who come to the meeting go home with their minds full of useful new information that they can directly apply to their daily jobs.

Andrew has not been able to attend as many lectures as he would like. On this occasion, he is the busy host, making sure that overseas guests are comfortable and at ease. Ireland has a reputation for hospitality that some people feel could be slipping as we move into the 21st century. Andrew – and the busy organising committee made up of a team of vets, nurses and others – are doing their best to ensure that in the veterinary world at least, Ireland does more than live up to this reputation. 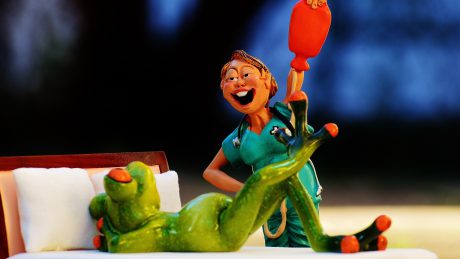