Obi loves her twice-daily walks through the countryside in County Wicklow. She’s a well behaved dog,  coming back to David when he calls her, so he is able to let her run off the leash to run, as long as he is in areas where there are no livestock.

Obi enjoys rushing through fields and undergrowth, picking up scents and following them at full tilt. When she’s running through meadows of long grass and fields of winter barley, she is too small to see where she is going, so she jumps up every few yards to get a sighting . This gives her the appearance of a small kangaroo, with her head appearing above the grass and her ears flying in the air over her head. She looks like she’s bouncing through the fields, rather than running.

Last week, just after coming home from a walk,  she began to squeal, making the same sound as if someone had stood on the tip of her tail. She started to scrape continually at her left ear with her paw, whining. When David approached her, she cowered away from him as if she was terrified, and she rushed indoors, hiding under the bed. David couldn’t see her under there, but he could hear her, still  whining and yelping.

David rushed her down to our clinic, but after lifting her onto my consulting table, I realised that it was going to be impossible to examine her properly. Even at this stage, she was still whining and yelping,  and she became hysterically upset when I tried to examine her left ear. There was only one answer: sedation

A veterinary nurse held her firmly while I gave her an intravenous shot of a knock-out drug. Ten minutes later, Obi was stretched out on her side, snoozing peacefully. I was then able to use an otoscope to thoroughly examine the inside of both of her ears. At first, I could not find much wrong. She had a low-grade ear infection in both ears, with an accumulation of thick brown wax and some redness of the lining of her ears. This is common in long-eared dogs like Spaniels, but it doesn’t normally cause the severe reaction that Obi was experiencing. I took a second look inside her left ear, peering right down to the ear drum with my instrument. That’s when I found the cause of the problem: a small blade of  grass, less than an inch long, had gone into her ear canal, and was stuck deep  inside. The sharp tip of the grass blade was rubbing up against her ear drum. If you can imagine this sensation, it’s no wonder that she  was being driven demented with pain and anxiety.

Once I had spotted the source of her distress, it was an easy problem to solve. I used a special instrument, known as “crocodile forceps”, which are like tweezers on the end of a long narrow stem. They are similar to a miniature version of the long handled rubbish-grabbing tools used by people picking up litter. I was able to poke the forceps deep into Obi’s ear through my otoscope, grabbing one end of the piece of grass and pulling. Within seconds, I had removed the grass blade, and Obi’s problem had been sorted.

When she woke up from the sedation, Obi was completely better, with no residual pain or discomfort. David is going to give her a course of ear ointment to treat her low grade ear infection, but there is no need for any other follow up treatment. The problem is sorted: Obi can go back to charging joyfully through fields. 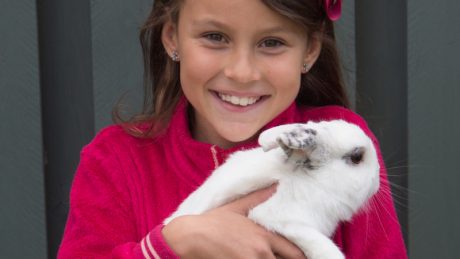 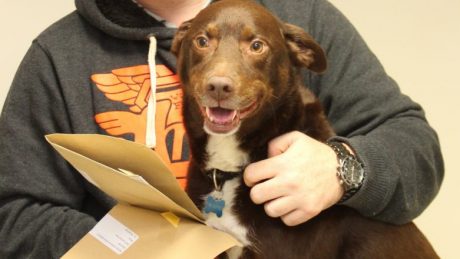 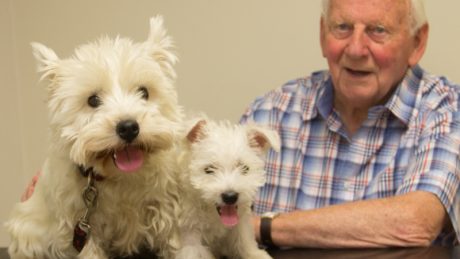