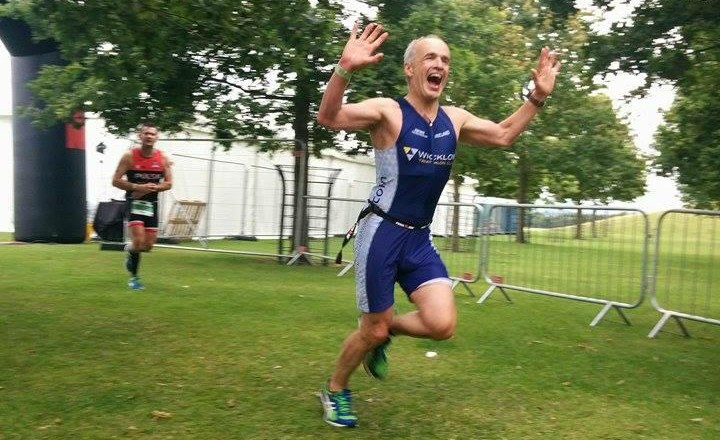 This is one of my intermittent triathlon race report blogs…. as a bit of a change from the animal stuff and to make the point that we all have more than one focus in our lives….

Last Sunday, 9th August 2015, I competed in my first Ironman event. The race was titled “Ironman 70.3 Dublin” – basically it is one of a series of races that are half the distance of a “full Ironman” – the total distance is 70.3 miles, and I guess the title sounds better than “Half Ironman”. It was the biggest triathlon ever to be held in Ireland, with 2500 competitors, so it was a massive organisational challenge. The Ironman team and their local helpers did a superb job: the atmosphere was fabulous, and everything went smoothly.

The distance is around twice the standard “Olympic” triathlon – so that means a 1.9km swim, 90km cycle, then 21km run. Quite a challenge, and to be honest, not one that I looked forward to. The only reason I agreed to do it at all was that my wonderful coach, Eamonn Tilley of ET Sports, believed that I would enjoy it, and I trust him completely. I followed his directions, and he was right: this was the most enjoyable race that I have ever done.

I had a good build up to the race – hard training up to a week before, then plenty of rest in the final week, including plenty of sleep. So I went into the race feeling well rested and focussed. I had done one lap of the run course 3 days before the race, and the day before the race, I paced out the run start and bike finish, so I was clear about where I had to go on the day. I have my own training and pre-race routines, which includes special energy drinks, bars and supplements from the Forever Living range: I’ve been using them for the past 18 months and I’m convinced that they have played a significant part in keeping me injury-free and performing well. 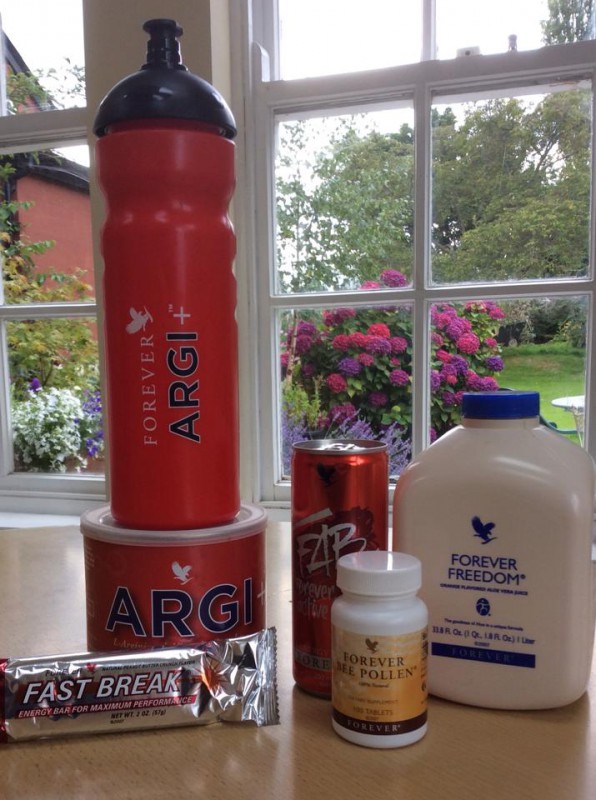 My alarm was set for 5am, but I woke without the alarm at 4.45am – a sign of my anxiety and readiness to go. I ate my usual pre-race muesli/banana breakfast, drank a strong cup of tea, gathered all the race gear and headed off: I was at the start by 6am.  I had plenty of time to get extra food stashed on my bike too: for a race of this length you need to refuel en route.

I debated about taking a puncture repair kit with me – I didn’t want to carry too much on the bike, nor to have any little bags attached to the frame that might rub on my legs. I ended up just taking a spare inner tube and one tyre lever – attached under my saddle at the back with elastic bands. This was completely out of the way, and I reckoned that someone would appear with a pump if I needed it.

I was in the last wave for the start of the swim, and there were a lot of folk in my section: I found myself in the middle of them all. We plunged into the sea at Sandycove,  swam around Scotsman Bay then back in to the shore opposite Teddy’s Ice cream shop. The swim was fine – I went steadily, not flogging it too much. The tidal current meant that sighting where I was going was important: you have to swim around a series of bright orange buoys. I found myself drifting off course on a couple of occasions. My legs started to cramp a bit towards the end but I just stopped kicking for a while, relaxing the legs, and the cramps went away. 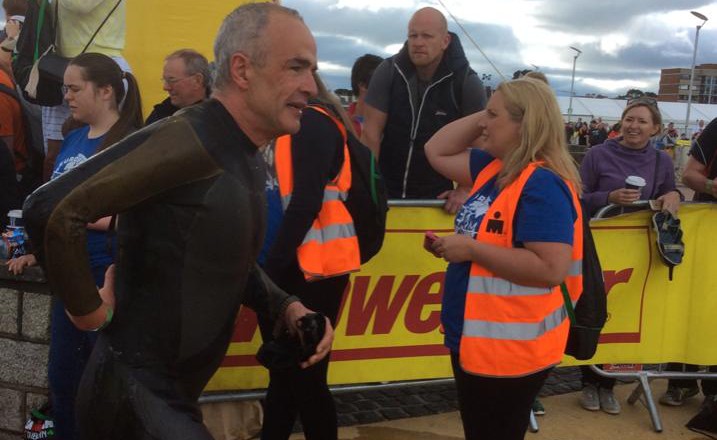 I felt a bit shocked as I emerged from the water – after 40 minutes at sea your head gets a bit muddled. But I soon gathered myself, and I did my best to unzip the top half of my wetsuit as I ran towards the changing tent: this is the standard routine in triathlons, and it makes it quicker to take the wetsuit fully off when you reach your bike. 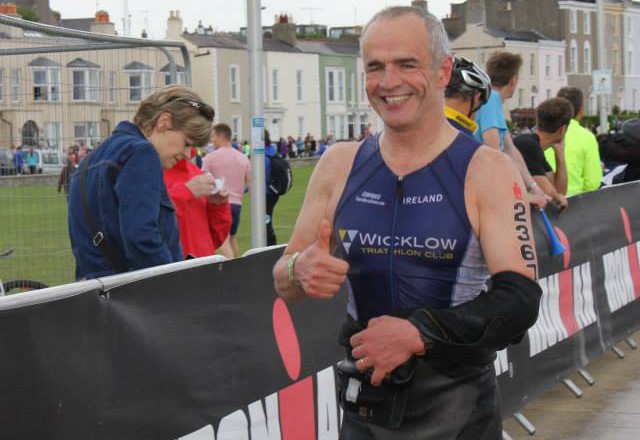 I jumped onto my bike, and headed off for the 90km course – along the coast road into Dublin city centre, then up along the Liffey, around the edge of Phoenix Park and out into the countryside around Kilcock and close to Lucan. The Dublin local authorities had closed the roads, specially for us: this must have irritated some locals, but it made the athletes feel cherished, and it was a lovely feeling speeding along the city roads without worrying about traffic lights or motorised vehicles. 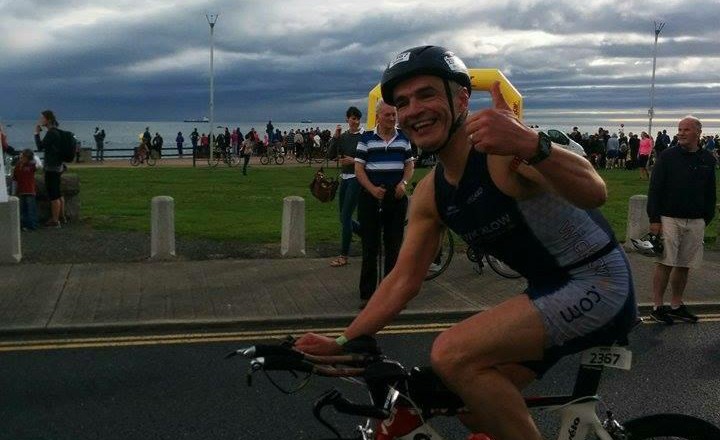 Some folk might wonder why I have bare feet in this photo: it’s because the routine involves attaching the clip on shoes to the pedals, then running in your bare feet beside the bike, finally jumping on as you cross the “mount line”. It’s a bit like jumping onto a galloping horse, and it’s just a quicker way of getting going. My coach, Eamonn, had told me to eat some food every 15 minutes, so I kept checking my watch to ensure that I did that. It’s the last thing you feel like doing – but essential. If you don’t eat on the bike, you run out of energy half way through the run, which is a horrific syndrome known as “hitting the wall”. If you eat well on the bike, the risk of hitting that wall is much, much lower. 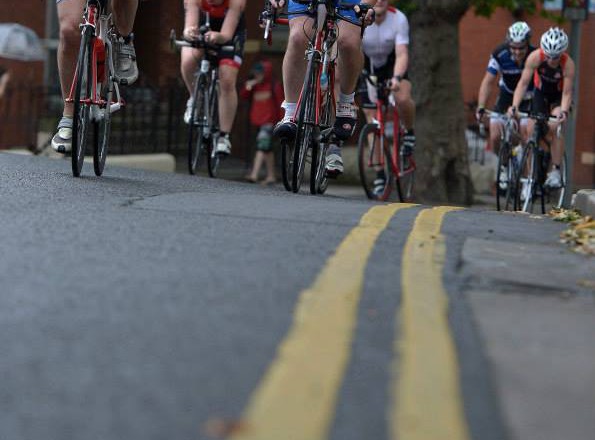 I enjoyed the bike ride – I averaged 33k/hr and around 140 beats per minute heart rate – I was monitoring these on my race watch. If I went too fast with my heart beating too rapidly, I would have risked “blowing up” later in the race, but if I went too slow, not pushing myself enough, I’d get a poor race result. So it helps a lot to be able to track these parameters as you go.

The road surface was a bit bockety at times, and there was a series of speed bumps which upset everyone’s stride – also it was quite crowded out there which made it difficult sometimes – I  found myself unable to over take people because it was so congested. All in all it was a lovely race course: it wasn’t too hilly, and the weather was cool, dry and calm.

I felt ridiculously elated at the start of the run, as you can see from the photo at the top. My body had had enough of cycling and it felt refreshing to be stretching the legs. I was laughing out of some weird exhilaration… but it didn’t last long.

The first half of the run was pleasant enough. I found myself beside a fit man in the age group above me, who was running 5 seconds faster than my target pace of 4:45 minutes per km – he was going at 4:40. I found that I could easily stay with him – we even chatted as we ran, with easy breathing. We ran past loads of people and I was left feeling that without him I could easily have defaulted to a slower pace. I called him my “race angel”: he ended up being third in his age group. 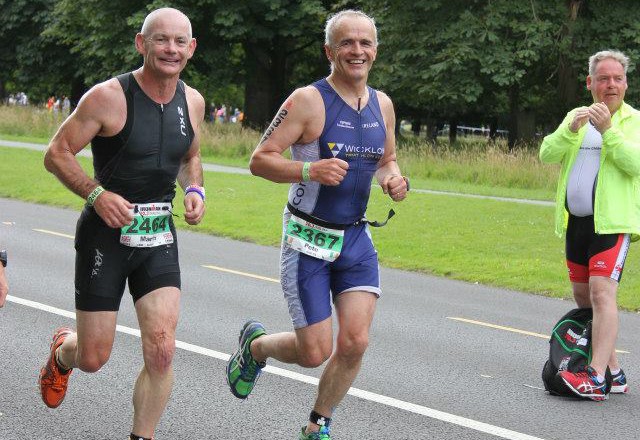 Around 11.5km (out of 21km), I found that I could no longer stay with him. My body just felt too tired. I had to let him go. Even with hindsight, I don’t think I could have done it. My legs were just not working properly any more. I did put on a brief temporary spurt and catch him after letting him get 20m ahead, but again, I just couldn’t stay with him, and I soon lagged behind again. The last one third of the race – 12k to 20k – was awful. I was at a slow pace for me, at over 5:00 mins per km, and even then I was struggling. I just wanted to finish but I knew it was a long way off still. The Wicklow Triathlon Club supporters were great, shouting encouragement as I went past. “Dig Deep!” was the call out that made the biggest difference. That’s what I needed to do, but it hurt so much.

Again, I monitored my heart rate as I ran: it averaged 153 per minute, which I knew was about right.  Ideally I should have kept it a bit faster all the way, between 155 and 160, but I am not sure that I would have been physically able for that.

At once stage I felt abdominal pain – in the top right of my abdomen, and I thought I might get into difficulty, but it soon passed. I paused briefly at two drink stations -once for water around 8k, and once for Pepsi at around 16k, and generally I felt fine. I passed people in various states of collapse, with one person obviously having a major gastro-intestinal disturbance, right there beside the road. This endurance type of event can be very punishing. 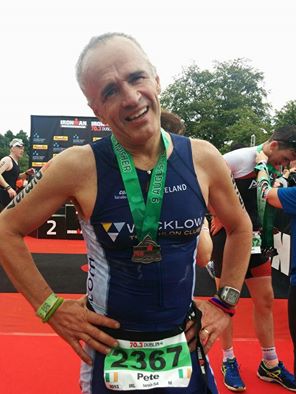 I was all done in by the time I reached the finish line. The first photos my daughter took of me were deleted because I looked so utterly wrecked. Once I’d gathered myself and the endorphins kicked in, I was able to smile again, and I felt great. My time was 5:12:27 – much faster than I had expected, so I was delighted. I was 12th out of 150 in my age group, and 329th out of 2500 today. 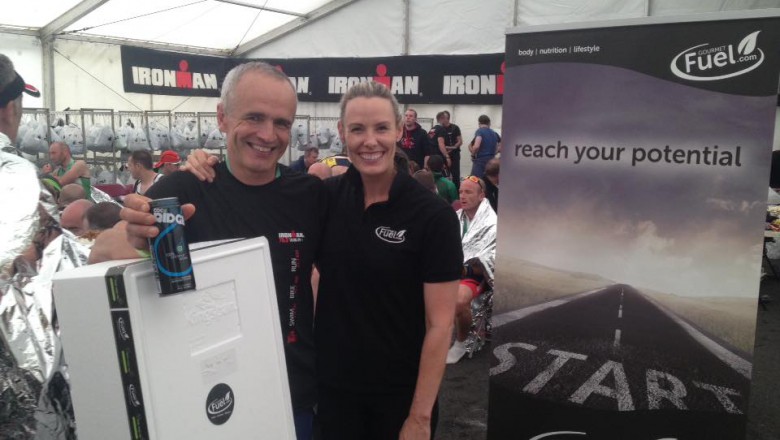 The people from Gourmet Fuel in Sandyford kindly gave me a one day recovery pack – basically this is four meals, costing less than €20, designed to give you everything you need nutritionally in the 24 hours after the race. It’s a great idea, and it worked really well for me. I didn’t have to worry about food preparation: I just ate what they gave me till Monday evening, and I have never felt better.

All in all, this was the most enjoyable race I’ve ever completed: a great atmosphere, a lovely course, and I performed as well as I could have done. Thanks to the organisers, my coach, my supplement suppliers, my post-race nutritionists and (yes) my pre-race training, I had a pleasant and memorable experience. The event returns next summer, and for me, it’s going to be a tough one to turn down. Want to join me then? Sign up here.