At thirteen years of age, Sonny lives the quiet life of an older dog. He goes out for a walk on a leash every morning and evening, and for the rest of the time, he stays around the family home, in a quiet cul-de-sac. Now and again, he’s allowed out into the front garden to do his business and he sometimes goes for a short stroll to the end of the cul-de-sac before coming home. He knows this routine well: when he’s ready to come back in, he barks at the front door, asking for someone to open it to let him back inside.
A couple of weeks ago, Sonny was allowed out as usual on a Saturday evening. Fifteen minutes later, he was barking at the front door, so he was allowed back in, as always. The family noticed that he was acting a little oddly, hiding behind the couch and being less active than normal, but at first they didn’t think anything of this. Perhaps he was just having a strange mood for no particular reason. But when they noticed a trickle of blood on the kitchen floor, they realised that something must have happened to him  and they took time to examine him carefully.

The first injury that Mikaela found was a cut on the underside of his chin. It was big enough to need to be stitched, and at first she thought that this was where the blood had come from. But when she examined him further, she got a big fright: when she put her hand on the underside of his body, it felt swollen, and gush of blood hit the kitchen floor, as if a tap had been turned on. When she lifted up his front legs to look properly underneath him, she could see that there were several long lacerations, and it looked as if his abdomen had been sliced open. Mikaela was horrified: Sonny had been the victim of a serious attack by a much bigger animal.

Sonny was taken to the Pet Emergency Hospital

The family took him into the Pet Emergency Hospital at once, where he needed intensive treatment to save his life. He was given intravenous fluids and other treatment for shock, and then the extensive wounds were repaired under a lengthy general anaesthetic. The contents of his abdominal cavity – his stomach and intestines – had been exposed to the air, and they needed to be cleaned, flushed and put back inside. He then needed to have the long lacerations stitched up, leaving long, jagged scars.

For the first few days, there was a real concern that he might develop life threatening peritonitis, due to bacterial infection of his abdominal contents. He came back to our clinic for frequent changes of the body bandages which were keeping sterile dressings in place and protecting his wounds. He had suffered from a shocking degree of bruising. Sonny was kept on a high level of pain relief and antibiotics, and he made steady, slow, progress.

Mikaela still doesn’t know what it was that attacked Sonny. The injuries must have been inflicted by a bigger animal, but it could have been another dog, or a wild animal such as a fox or a badger. It’ll always be a mystery.

Two weeks after the incident, Sonny came back for his final check,  to have the last sutures removed. Mikaela told me that he’s returned to his usual, enthusiastic self, with one difference: he doesn’t want to go out the front door any more.  And as Mikaela says, even if he did want to go out, they wouldn’t let him. From now on, Sonny’s only going outside with one of his family to keep a close eye on him. 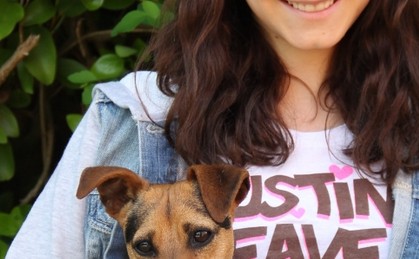 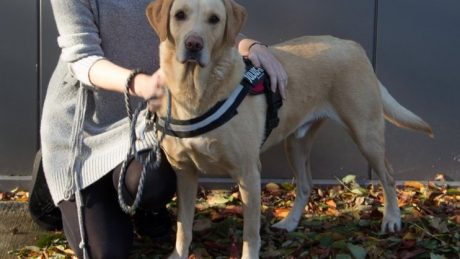