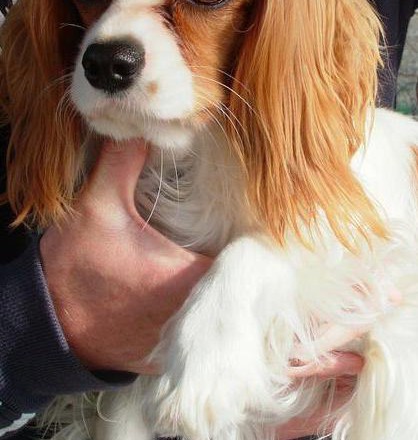 “Thula” means “stay quiet” in the Zulu language, a reminder of the Cahill’s time spent living in South Africa. In fact, Thula almost never needs to be told to stay quiet, since she is a gentle, good-natured, easy-going dog, typical of her breed. She is a good example of the reason why Cavalier King Charles Spaniels are often placed on the top three list of “best breeds as a family dog”.

One evening at around 6pm, an urgent phone call came in from the Cahill family. The message transcribed by our receptionist seemed to be clear: “The dog had been playing ball with the family in the park, and one of the children had accidentally kicked her leg. The owner was sure that the leg was now broken”. The Cahills were told to bring Thula down to our clinic immediately, but there was something that did not quite ring true about the story. I have seen many children playing with their pet dogs in the park, and it was almost impossible to imagine how a broken limb could result from such a low key, low energy activity.

Thula was being held in Gareth’s arms when she arrived at our clinic, and the telephone message soon began to make sense as Gareth explained the sequence of events. The so-called “children” were in fact twenty-one years old. Gareth had been out with a couple of mates playing football on the pitch in the local park. Thula had come along, but she was not physically taking part in the ball game. Instead, she was trotting around beside the lads, ambling about the place as she does.

The football game was getting quite intense, and one of Gareth’s friends managed a tricky shot, turning and kicking the ball with full force. Unfortunately, Thula chose that moment to trot into exactly the wrong place at the wrong time. She somehow placed herself directly between the ball and Gareth’s friend’s foot. Before he could stop himself, he had kicked Thula with full-force on her left side. Poor Thula fell to the ground, squealing. When she tried to stand up, she continued to squeal, and it was obvious that something very bad had happened to her left foreleg. She was holding the leg at an unnatural angle, unable to put any weight on it at all.

Gareth picked her up, and rushed home as fast as he could. The phone call was made to our vet clinic, and now here he was standing in front of me. Thula still had her leg held up at a strange angle, and when I moved to examine it, she squealed again. She was clearly in a lot of pain. I admitted her to our clinic for investigations immediately.

I gave her a general anaesthetic, and as her body relaxed, I could examine her leg without causing her any discomfort. I could not feel any broken bones, but it was obvious that something dramatic had happened to her elbow. Normally the bones above and below the elbow are in a straight line. In Thula’s case, the bone below the elbow was angled to one side. It was like a clock hand at 10 o’clock when it should be at 12 o’clock.

I took some x-ray pictures of her leg, and they told me exactly what had happened. Thula had dislocated her left elbow. The force of the kick had not been enough to break any bones, but it must have caught the tip of her elbow at a particular angle. The hinge joint had been separated, just like a door hinge being pulled apart. I could see from the x-rays that Thula had been lucky: there was no other damage to her leg. If I was able to slot her dislocated elbow back into its normal position, there was a good chance that she would make a good recovery.

A veterinary nurse assisted me in the task. Thula was completely unconscious, under full general anaesthetic as we manipulated her damaged body. The nurse held Thula’s shoulder steady. I grasped her left front foot in my hand, and pulled hard, while with my right hand, I twisted and pushed the point of her elbow. After a few moments of straining, there was a satisfying “clunk”, and Thula’s left leg was straight again. I carefully flexed and extended her elbow, and it was definitely back in place.  She was given a strong dose of pain relief, and allowed to come around from her anaesthetic.

With some dislocated joints, a supportive dressing is needed to hold the corrected joint back in place. In Thula’s case, we decided that the gentle back-and-forwards movements of walking would help to continue to push the elbow back into its correct position, so no bandage was needed. She went home that evening, with strict instructions for complete rest for ten days. She was able to walk on her left leg straight away, although she was groggy and disorientated. Thula had just had the most eventful day of her life, and she was ready for a big sleep when she got home.

I checked her three days later, and she was now completely back to herself, in good form and walking normally on her leg. She will be ready to play football again in a few weeks, but somehow, I don’t think she’ll be invited to any further practice matches.