Adventure race report: Gael Force Dublin from the perspective of a triathlete

I am an experienced triathlete, with ten years of regular racing squeezed into my lycra triathlon suit. I still love triathlons, but the race format has lost some of its zing. I know what to expect now, and there’s an element of boring predictability. So when someone suggested that I give an adventure race a go during the triathlon off-season, it appealed. The idea coincided with my search for a way to raise funds for the Leprosy Mission, as my daughter is currently working for this Irish charity in southern India. Before I realised exactly what I’d got into, I found myself signed up to do Gael Force Dublin in early February 2018.

The event has two distances: I could choose to do 49k or a slightly easier option of 29k. The longer race appealed to me: if I was going to suffer, I might as well suffer properly.

I am used to the swim/cycle/run format of triathlons, but this was very different. It was a combination of running, cycling, kayaking, running again, cycling again, then a final short run. This all sounded straightforward enough. I decided to do the race with my triathlete mate, Mark, and the two of us trained steadily with some decent road runs and bike spins. We had planned to do a practice day on the course itself, but somehow that never happened. Which was a shame, as you’ll discover later.

The day of the race – Saturday 17th February – was bright, sunny, dry and clear: a perfect racing day. Mark and myself drove to Tallaght, parking the car in one of the local multistorey car parks with the help of the voucher kindly supplied by the race organisers. We were used to the tense build up before triathlon races, with fine-tuned athletes and their state-of-the-art bikes, helmets and other complicated gear. This racing crowd was different: everyone seemed relaxed and chatty, even laughing.

In the triathlon world, the free goodie bag might contain racing gels, vouchers for new equipment and information about treating race injuries. In this Gael Force event, the goodies included a comfortable long sleeved shirt and a bottle of bespoke Gael Force beer. Definitely a different tone to this sport. 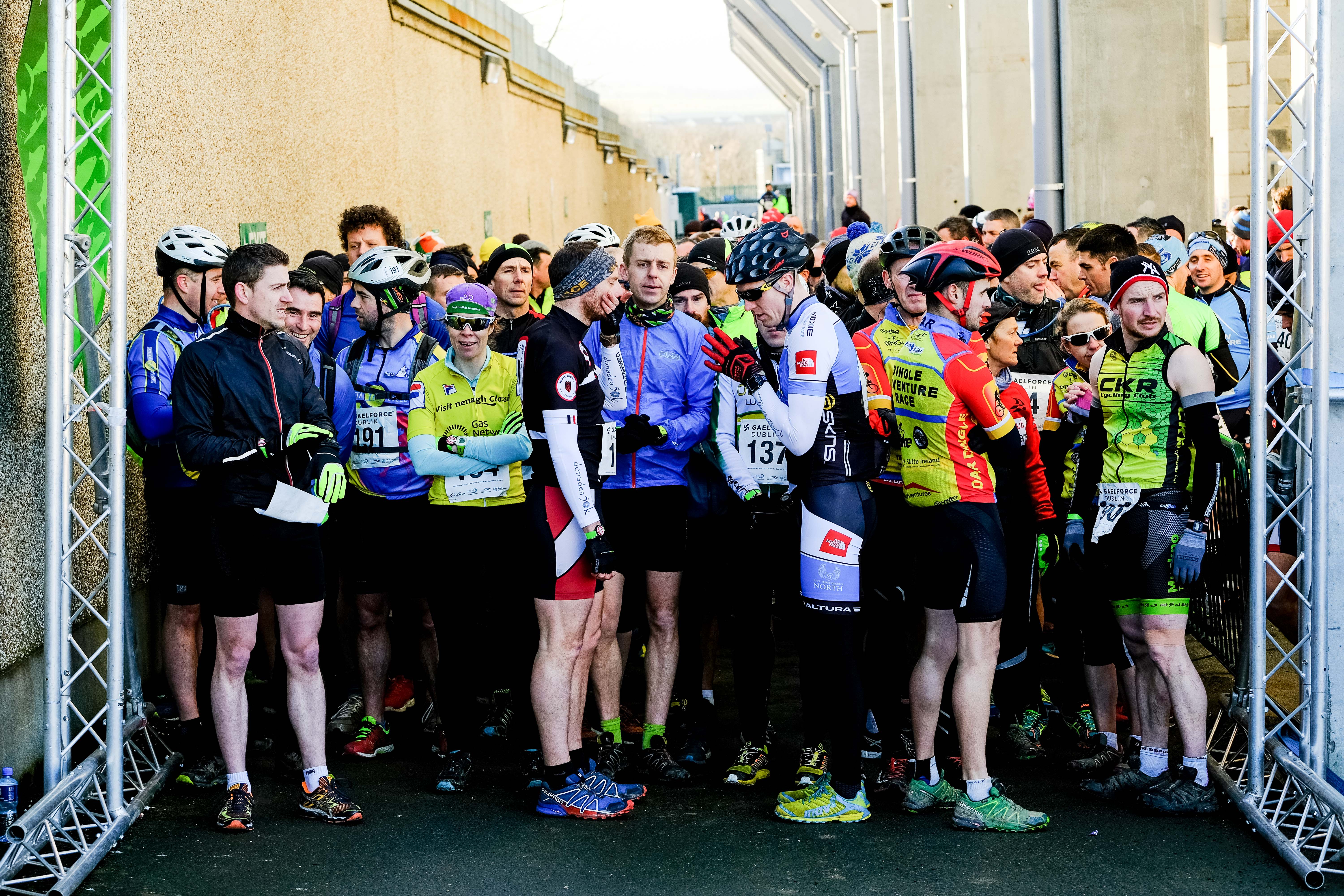 The registration was simple and smooth, the rules about racking your bike were pleasantly informal, and before we knew it, we were lined up for a mass start with a couple of hundred other competitors. A Mr Motivation style exercise guru gave us all some limbering-up exercises to do as a group, then it was three-two-one-GO and we were off, jogging steadily out of Tallaght Stadium like a big flock of sheep.

We didn’t have far to run for this first section: just a kilometre to the bike-racking area, where we hopped onto our bikes. Then it was onto the road, for a 16.5km spin up into the Dublin mountains. This was my favourite section: it reminded me of many triathlon races that I’ve done. A steep enough gradient, but a smooth road surface, and nothing unmanageable. 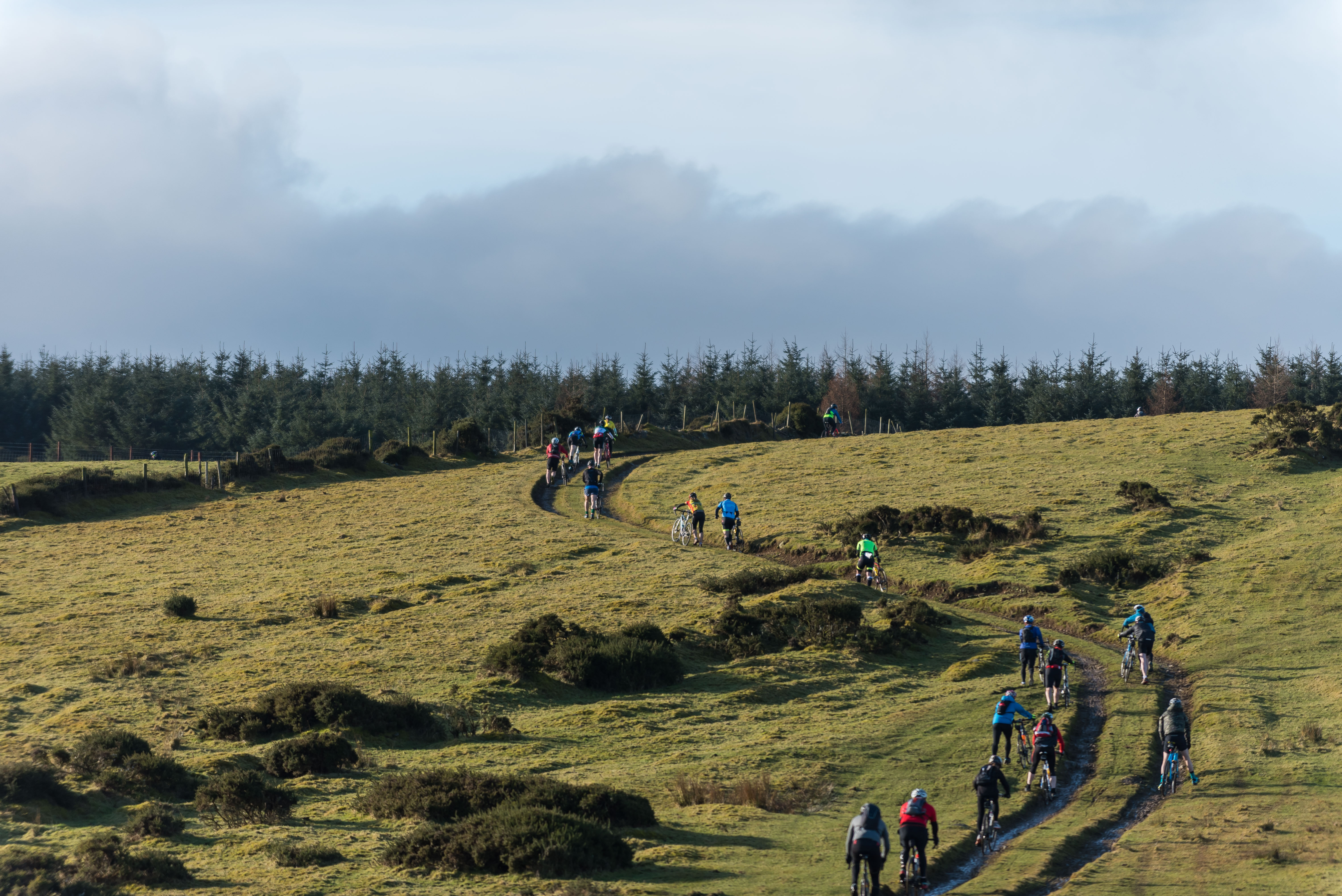 Then something odd happened: the deceptively friendly marshals ushered us off the tarmacked road, turning left through a farm gate. Suddenly we were pedalling along a dirt track, through wet muddy fields. The mud on the track grew deeper and deeper, and soon it was eight inches deep, with puddles three feet wide and ten feet long. This was a far cry from my usual sealed road cycling. I’d been foolish enough to head out on my road bike, complete with racing tyres. I had no purchase at all, and was slipping and sliding everywhere. Meanwhile my gears soon clogged up with mud, and before I knew it, to my shame, I was pushing the bike. In the triathlon world, this is classified as “failure”: nobody pushes the bike. I had come down to earth with a jolt.

Next, we were ushered out of the fields, and I found myself travelling at speed down a Coillte forest gravel track. While this was easier than the mud-bound fields, it was still slippery and bumpy. It was a relief to hop off the bike, starting the short run to the reservoir where our kayaks were waiting for us. These were sit-on-top plastic boats, with two people per vessel. I sat in front, with Mark behind me; we were pushed out into the open water, and off we went, with 1.5km to navigate. 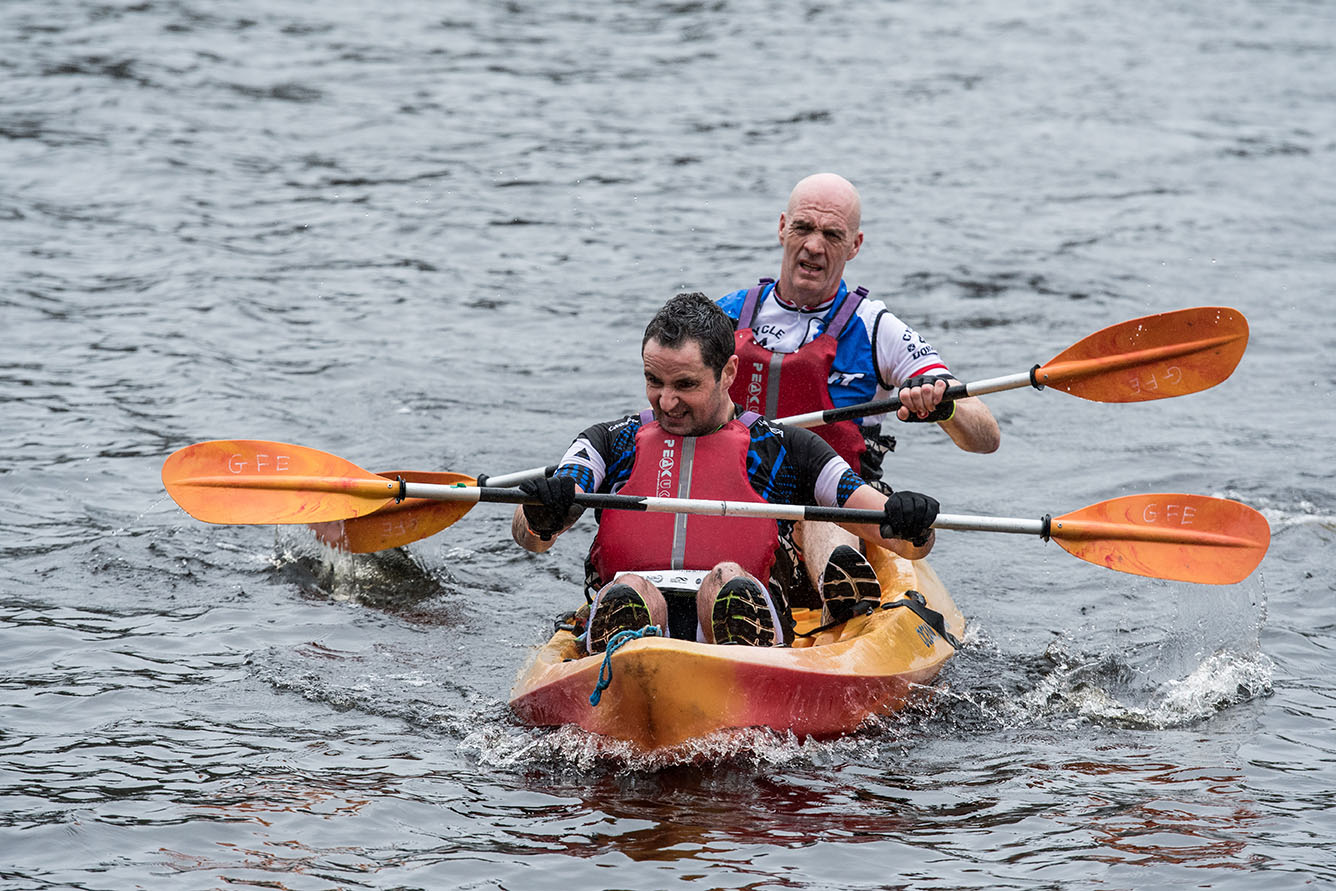 The photo above is not of myself and Mark, but it gives you a sense of what’s involved. We hadn’t managed to fit any kayaking practice in, so this was a new idea for both of us. The concept is simple: paddle as fast as you can, in as straight a line as possible. The reality was challenging: the co-ordination between front and back person is not as easy as you’d think, and we slowly wobbled towards the turn-around buoy as others whizzed past us. My main worry was capsizing: the boat did not feel in any way stable, and that water looked cold and deep. Still, it was all over in twenty minutes, and now we were off on the main running section, covering 13km up and down Kippure Mountain. 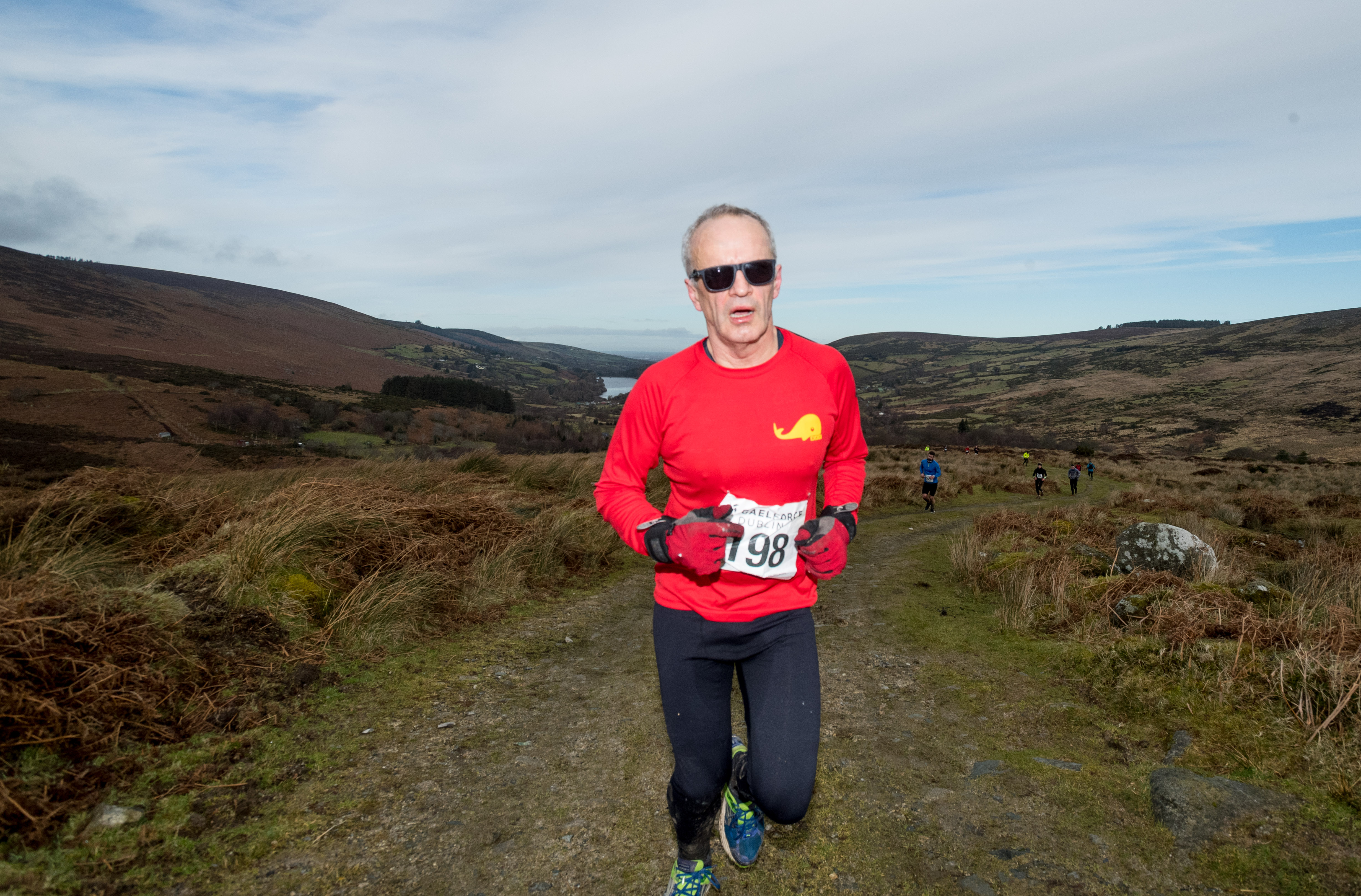 Mountain running – or should I say, walking

I should have spotted the clue in the written description of the route: “mountain run/walk”. Our road running training counted for little here: we found ourselves running along a rock strewn pathway up the side of a mountain. We ran for the first twenty minutes, but when the gradient turned into a forty five degree angle, enough was enough: the mountain run became a mountain walk. The views around us were magnificent, with the Dublin mountains all around, and the vista of Dublin city in the distance. Free running horses galloped past us, and hordes of fellow competitors were straggled ahead and behind us: it was a memorable scene.
The turn around point came sooner than I’d expected, and now instead of the almost-impossible run up the side of a mountain, I was faced with a next-to-impossible canter down a virtual cliff-face. It was a relief when the mountain side was behind us, as we approached the racks where we’d left the bikes beside the reservoir. 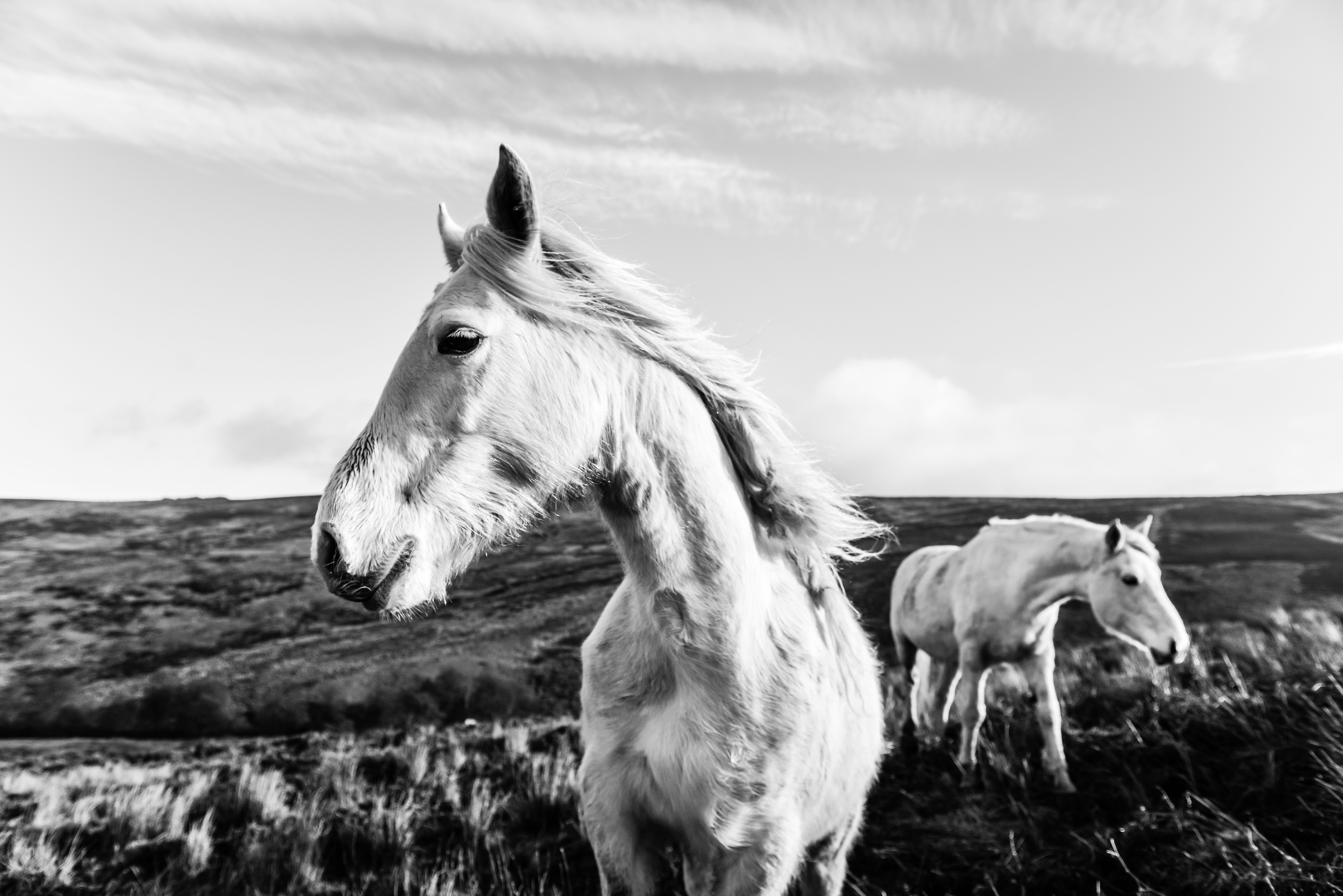 The final leg on the bike

The second bike leg was misleadingly simple at first, up a steady incline. But that incline became steeper and steeper, and my mud-clogged gear assembly struggled: the lowest gears would not click into place. As the road stretched 2km ahead up a steep incline, I could see cyclists way ahead of me, pushing their bikes. I did my best, but without my easy-to-pedal low gears, I failed again, getting off the bike and walking. I consoled myself by the fact that the person beside me, also walking, was a fit young twenty-something: there was clearly no shame in doing this. He soon put me right: his rear sprocket had shattered, so he had no choice but to walk. If his bike was still working, he’d be pedalling over the far horizon, he assured me. I kept my head down after that.
The steep stretch uphill finished way up high in the Dublin hills, and after that there was an equally steep road back down again. By this stage, I’d been exercising for over three hours, and my muscles and nerves were frayed. I braked hard, keeping myself safe and comfortable as I negotiated the twists and bends of the steep downhill stretch. But I cursed myself at the same time, as the more adventurous riders swept past me: where had my nerves of steel gone? Why was I not going as fast as them? 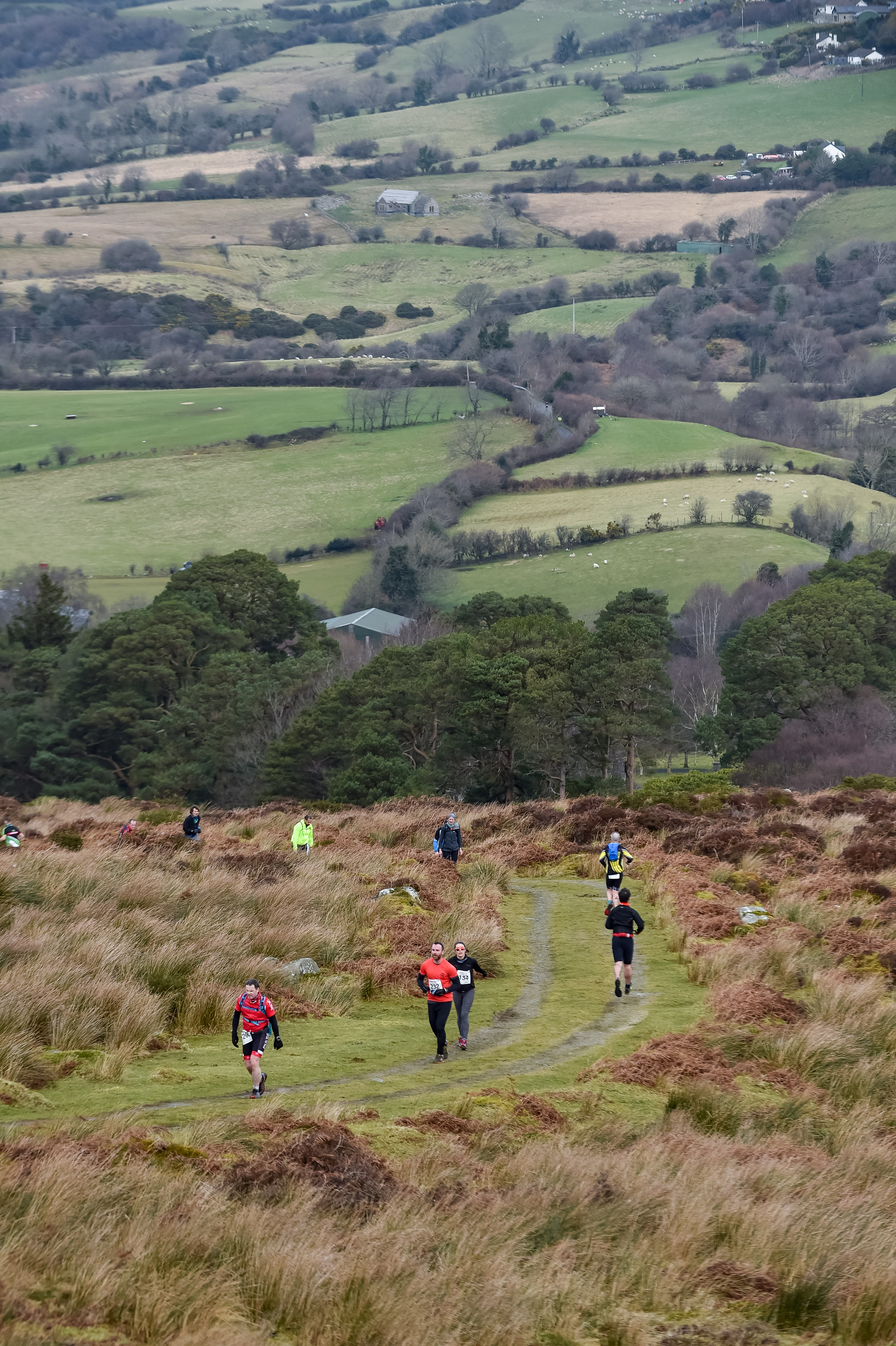 The finishing line in sight

Soon, the Dublin hills were behind me, as the traffic density increased and I found myself on suburban roads as Tallaght Stadium loomed ahead. Gardai and marshals manned the junctions so there was no need to pause at traffic lights; it was a steady swift cycle back to base. One final racking of the bike, then a half kilometre gallop through the stadium to the relief of the muddy finishing line.
In triathlon races, an electronic chip is attached by a velcro strap to your ankle, so you don’t need to think about being timed: you run across mats underfoot, and it all happens automatically. In this race it was different: I wore a velcro strap around my wrist, like a watch, and I had to press this against hand-held scanner being held by a marshal at various stages of the race. This method of timing seemed primitive compared to the smoothness of the triathlon method, but it worked astonishingly well. Within half a minute of finishing the race, I was handed a slip of paper with a printout of my times for each section. I’m used to waiting several hours for triathlon results, so this was impressive. 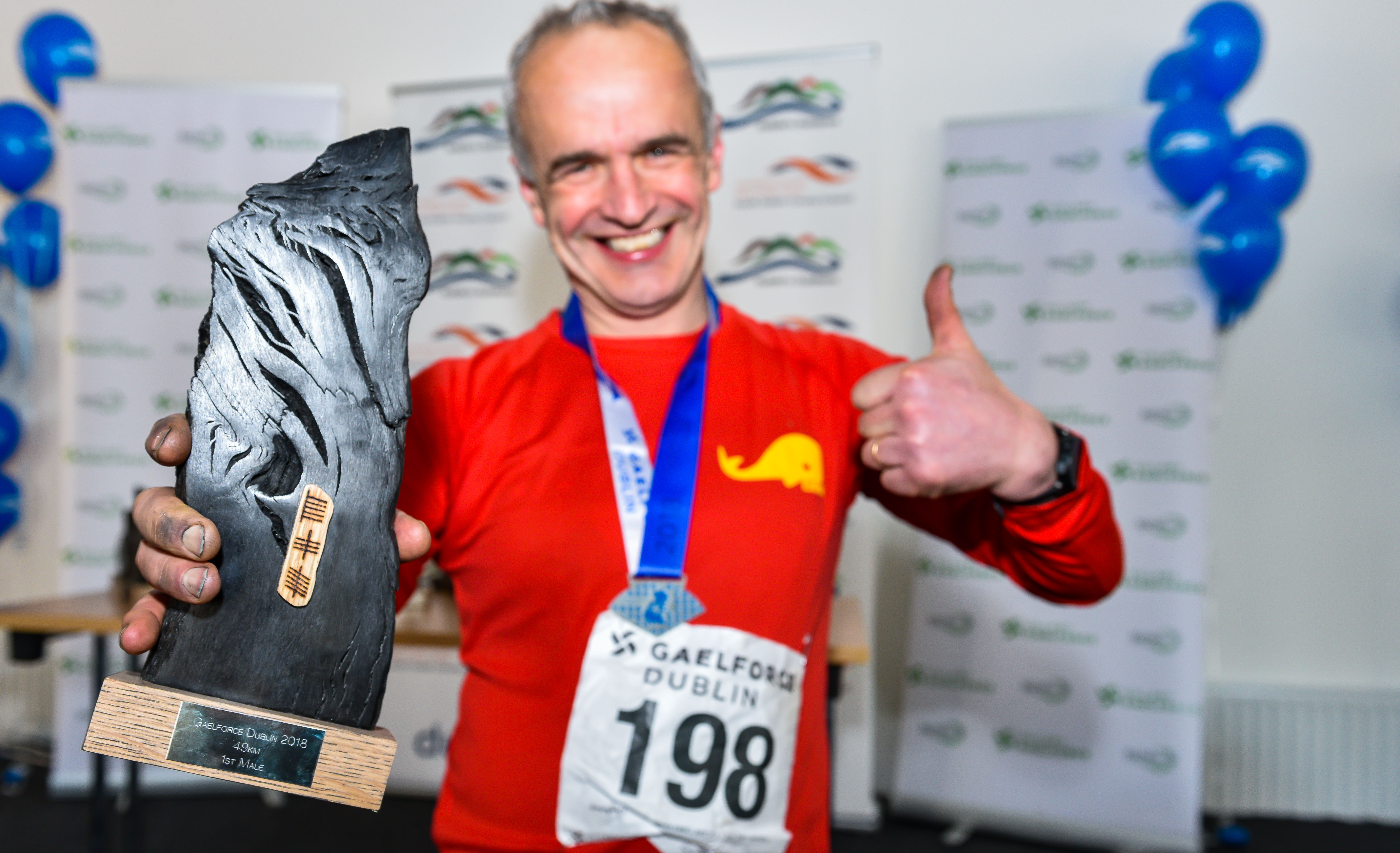 The end of this race, but the start of a new addiction?

My result was definitively average: I was seventh out of thirteen men in my age group, 125th out of the 275 men who entered. I was happy enough with the result, but even happier just to be finished. I’d raised money for Leprosy, and despite the suffering, it had been a good day.
As I picked up my bag from the registration area, I noticed that there was a special trophy on the top table, to be presented to the “first vet back”. This was surely mine; I hadn’t seen any other veterinarians out there. An onlooker soon put me right: there were dozens of over-40 veterans who had crossed the finishing line long before me. I’ll have to wait for another day to pick up my first adventure race trophy.
And that day could be coming. I’ve signed up for the flagship Gael Force event: Gael Force West in Connemara on 23rd June. This time, I’ll get knobby tyres and mud-proof gears on my bike. And I will practice some proper mountain running. There’ll be no stopping me next time! 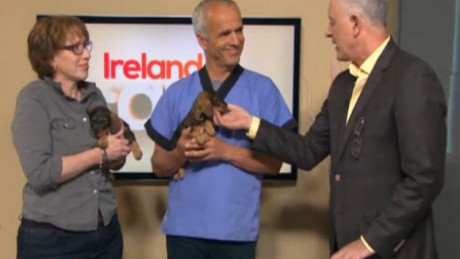 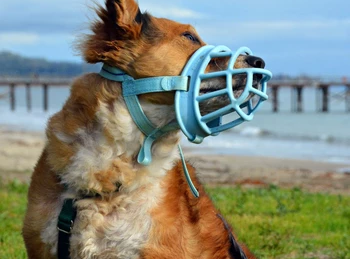 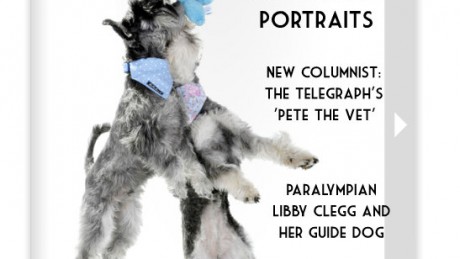