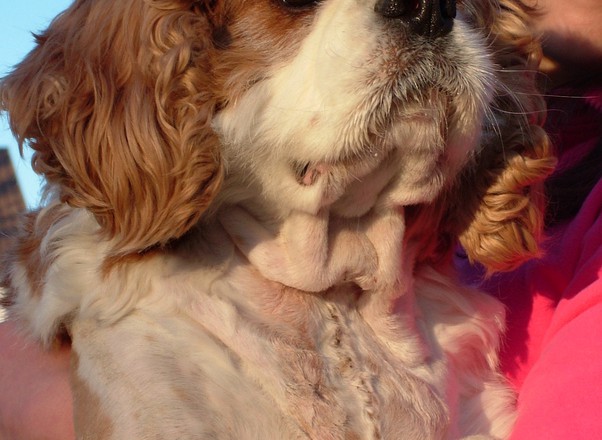 Almost exactly one year ago, just before Christmas, Lucky first showed signs of having a sore neck. The Martins had noticed that he was suddenly walking stiffly, as if he had a sore shoulder. When I examined him then, it was obvious that he was in pain. When I gently prodded and twisted his neck, he yelped. There are many causes of stiff, sore necks in dogs, as there are in humans. At first, it seemed most likely to be a simple sprained muscle, or perhaps a bruise, and so he was given pain relief, with instructions for strict rest. Lucky made a rapid recovery, and when he was re-examined a week later, just before the New Year, he was completely back to normal, with a pain-free neck.

The situation began to seem more complicated just two weeks later. Lucky snapped at Rachel, which was something he would never normally do. When I examined him this time, it was trickier to find out what was bothering him. His neck seemed pain free, but he seemed to resent his lower back being prodded. A series of x-ray pictures of his spine were taken,  and although his neck looked normal, there were some suspicious changes in the appearance of his lower back. These were consistent with a slipped disc, although it is difficult to be certain about this diagnosis without more detailed investigations. I prescribed a longer course of pain relief and rest, which is often effective for this type of problem. Lucky again made a good recovery, and this time, he remained symptom-free for nearly six months.

It was in early June that the signs of a spinal problem recurred, but this time, pain was not the problem. Instead, Lucky developed a weakness of both back legs. His hindquarters wobbled when he walked, swaying from side to side. When he stood still, he placed his feet wider apart than normal, because if they had been in the normal position, he would flop from side to side.  I took another series of x-rays, but there had been no further changes since January, and there was certainly nothing to explain these new symptoms.

There is often a difference between the appearance of spines in x-rays and the type of symptoms that are experienced in the patient. Some dogs can be perfectly normal, yet they can have spines that look very abnormal in x-rays. And some dogs can have normal x-rays, yet they can have quite severe pain related to disease within the spine. X-rays are still regarded as the first line in investigating spinal pain, but there are some cases that require extra investigations to identify the cause of the problem. Lucky was clearly one of these complex cases. I decided to refer him to the Veterinary Hospital at UCD for the next stage in a work-up.

At this point, Lucky made another remarkable recovery. He began to walk normally again, and there did not seem to be an urgent need to look into his problem in more detail. He went home, and it was decided that the Martins would monitor his problem carefully, with a view to taking things further if he deteriorated again. It was just last month that Lucky took another turn for the worse. His wobbly back legs recurred, and this time he seemed to be in pain as well. New x-ray pictures still did not allow a definite diagnosis, and so Lucky was scheduled for the next level of diagnostic investigations.

Magnetic Resonance Imaging, commonly known as MRI scans, are not often carried out in animals, but Lucky was a good example of a case where the technique was essential to make a diagnosis. MRI scans allow vets to see a three-dimensional image of the inside of the spine, including clear visualization of the spinal cord itself. The equipment that is needed for MRI scans is expensive, costing many hundreds of thousands of euro, and there is no permanently available scanner in Ireland. Instead, a mobile MRI unit calls into UCD intermittently, when enough cases are available to justify its use.  This means that there is sometimes a waiting list for MRI scans in pets, and Lucky could not be scanned immediately. He was kept comfortable with pain relief and rest, but no further action could be taken until a detailed diagnosis had been made.

Lucky had his MRI scan, and the diagnosis was finally clarified. Lucky had a slipped disc in his neck that was invisible on x-rays but clearly demonstrated in the MRI image. The disc had not responded to rest and pain relief, and so surgery was the only option. The operation was a major procedure. Fur was clipped along the underside of Lucky’s body, and a long incision was made in the midline, beneath his neck. It was almost as if he was a stuffed toy, being unzipped. The surgeon was able to carry out a complex procedure on the bones of his neck, removing the damaged disc that was pressing on his spinal cord.

I saw Lucky this week, two weeks after his operation. He has recovered very well, and he is walking normally again, with no pain or wobbly back legs.  The spinal disc – which was the cause of his problem – has now been completely removed, and hopefully this time his recovery will be permanent.

Lucky has lived up to his name – he may have had problems, but he has come through them, and he is now a healthy dog again, enjoying life to the full. And the Martins feel that they have been lucky in one way: they made the sensible decision to have him insured as a puppy, and so the costs of his complex treatments have been covered for them by the insurance company. 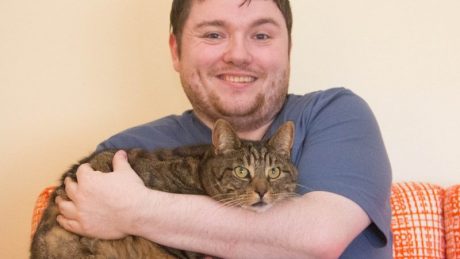